The moving story of how God is healing addicts and prostitutes through faith in Christ
Population 4.18 million. Situated like a jewel by the beautiful Mediterranean Sea, it beckons to tourists from around the world to enjoy its nonstop nightlife, luxury hotels, and world-class restaurants.

The New York Times has called Tel Aviv the “Mediterranean capital of cool.” National Geographic magazine named it one of the world’s top 10 beaches, and the city was voted the fourth best in Africa and the Middle East by Travel + Leisure Magazine.

But like most cities, Tel Aviv has a side that tourists never see. It’s the seedy, godforsaken-looking side, where filthy, rundown buildings and brothels frame streets littered with empty soda bottles, syringes, and drug paraphernalia; and Jewish addicts and prostitutes from every walk of life—including the ultra-Orthodox—live on the sidewalks, struggling to make it through one more day.

That is where the Aviv Center is located. Run by Aviv Ministry under the direction of its founder, Dov Bikas, the Aviv Center has been helping addicts and prostitutes since 2005 by meeting their basic needs of food and clothing and giving them the one thing that can completely change their lives: the matchless gospel of Jesus Christ.

The Aviv Center is among the many ministries The Friends of Israel Gospel Ministry (FOI) helps support through donations to FOI’s Israel Relief Fund. Run by volunteers who are former addicts, the center is open every day to provide a shelter where addicts and prostitutes can get a good meal, wash their clothes, take a shower, and experience the love of Christ.

The ministry’s goal, as stated on its website, avivministry.com, is “to help [addicts and prostitutes] get fully restored, return to normal life and to their families, become a blessing to others and bring good fruit. We know that only the Lord Jesus can really make all these changes in their lives. That is why in our day center in Tel-Aviv we actively preach the Gospel of Jesus Christ, who came to this earth to save sinners—including those who seemed totally hopeless.”

FOI Executive Director Jim Showers, who has visited the center many times, has witnessed the fruit of Aviv Center’s labor: “Bible studies,” Jim said, “help people see the only hope to escape their addiction is to turn to God and believe in His Son, the Messiah of Israel. Having met several former drug addicts who came to faith through the ministry of the Aviv Center, I have seen firsthand the life-transforming miracle of the gospel. Hearing their personal testimonies of the night-and-day change in their lives because of faith in Messiah is amazing.”

Amy Westphal, FOI’s director of Ministry Support, said the center is stocked with Christian tracts and literature in many languages, “including a lot of the languages of immigrants from the former Soviet bloc. There were also Bibles in many languages and some song books. Dov explained to us that many of the addicts are immigrants. The Aviv Ministry oozes tangible Christian love for those who are basically forgotten by Israeli society.”

“Many young Jewish people have found their Messiah, left their addiction to drugs and alcohol, and with God’s help, brought their lives back in order.”

People may forget them, but God never forgets those for whom Christ died. “Many young Jewish people have found their Messiah, left their addiction to drugs and alcohol, and with God’s help, brought their lives back in order,” Dov said. “We see that many of the rehabilitants not only leave drugs and fully restore their lives but also start serving others.”

Here are two of their stories. They are testimonies of the power of the gospel and how knowing Jesus personally can change a life.

My name is Gennadij.
I was born into a Jewish Caucasian family in Chechnya, and my entire adult life was spent among Jews who honored the traditions of their fathers. I became a musician and worked in various philharmonic societies, played in restaurants, etc. I was married and had three children.

At first, I used to drink only alcohol, but soon drugs came into fashion, and I switched to them and became an addict. I tried to quit many times, underwent different types of treatment, and stayed in hospitals; but nothing worked. My wife left me several times.

We had many relatives in Israel, and they offered to help us immigrate and start a new life in the Holy Land. My wife agreed to give me another chance, and we moved to Israel. I got a good job and everything was great. But as they say, “The drug can be patient.” After a while I began to shoot up again. All my days were the same: search for drugs, withdrawals, lying, stealing. Eventually I ended up in prison. My wife left me, and I hit the bottom.

One day, when I came to Aviv Center to eat (I had heard about this place from my buddies), I met a friend I had not seen for a long time. I didn’t recognize him because he had changed so much and looked so good. 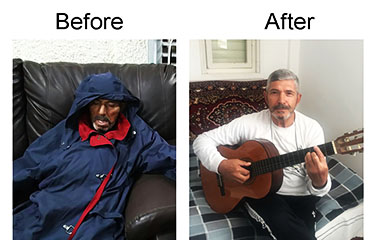 I lived in Ofakim then, and there I had a good friend who was a member of a congregation of believers in Jesus. She offered to take me to a rehab center many times and told me about Christ. But I always replied that I was a Jew, and we honored our faith.

But after talking to my friend in Tel Aviv, I started rethinking the matter and eventually agreed to go to rehab.

Now I have not just given up drugs, alcohol, and cigarettes. I have realized that God is my personal Savior, that Jesus died for me and gave me a new life, and that now I want to dedicate my life to Him.

Now I understand that freedom does not come from living in the Holy Land but from faith in the Holy Son of God. He finds sinners like me through ministries like Aviv Center and makes us His children. Today I am His son, and I want to glorify Him with the gift He gave me: to sing to Him, play musical instruments, teach others, and serve Him in the places from which He delivered me.

I want to thank God for places like Aviv Center, which I visit now not to eat, but to feed others. Glory to Him for this!!!

Note: Today Gennadij leads one of the volunteer groups that operate Aviv Center.

My name is Sergey.
I immigrated to Israel from Ukraine, where I already abused “light” drugs. At age 18, in Israel, I tried heroin for the first time. In 2010 I started seeing a girl who knew I was an addict and tried every possible way to help me get rid of my addiction.

When I ended up in prison, she came to see me, never losing hope. Several years later we married and had two children. But I continued rolling down into the abyss. I even tried rehabilitation in a Christian rehab but returned to drugs. Eventually, I lost everything: my family, my job, and my faith. 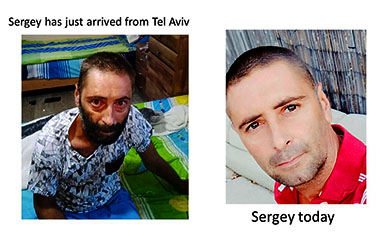 I lived on the streets of Tel Aviv for two years and went to Aviv Center to eat and change clothes. Later, I needed medical aid for my legs. Sadly, it took me a long time to decide to start rehabilitation.

That was when a very strange thing happened to me. During the quarantine, the hours of Aviv Center changed; and some days its volunteers could not come at all. It was on such a day that I went there to say I had finally decided on rehab.

I was sitting outside the door in despair, having lost all hope. I had no money, no food. And my body was rotting so that I could hardly move—and now this place, my last island of hope, was empty and closed! I did not know what to do. I remembered the words and prayers I had heard in Aviv Center. I cried out to God whom I had been told about so many times.

Suddenly, a man came up to me. He helped me stand up and bought me food. He listened to me and offered to send me to a rehab. We found the phone numbers of the rehabs on the schedule next to the doors. He called one and explained the situation, and its workers told him they could come for me. But he said he would send me by taxi. I started rehabilitation that very day! Neither I nor anyone else has seen this man since. I like to think he was an angel.

God has restored my health and brought me into fellowship with Him. The relationship with my family has been restored as well. I trust the Lord entirely and want to serve Him for the rest of my life. I believe He will complete what He has started in me. Amen!

3 thoughts on “From Death to Life”