Why I Love Israel

It seems as if the eyes of the entire world are continually upon the tiny State of Israel.

And your eyes need to be there as well because the Jews are God’s people, and Israel is the land of destiny. Israel is God’s measuring rod and blueprint for what He is doing in the world. Let’s learn of God’s intimate love for this nation and His sovereign plan as described in Revelation 12.

Now a great sign [wonder] appeared in heaven: a woman clothed with the sun, with the moon under her feet, and on her head a garland of twelve stars. Then being with child, she cried out in labor and in pain to give birth (vv. 1–2).

In this passage the wonder talked about is the nation of Israel. Three proof texts in God’s Word support this prophecy: Genesis 37:9; Isaiah 54:5–6; and Romans 9:4–5. God called and ordained Israel because it was through Israel that all of the world would be blessed (Gen. 12:3). Every child of God is blessed because of Israel.

A key verse that talks about God’s special favor on Israel is Deuteronomy 7:6: “For you are a holy people to the Lᴏʀᴅ your God; the Lᴏʀᴅ your God has chosen you to be a people for Himself, a special treasure above all the peoples on the face of the earth.”

And another sign appeared in heaven: behold, a great, fiery red dragon having seven heads and ten horns, and seven diadems on his heads. His tail drew a third of the stars of heaven and threw them to the earth. And the dragon stood before the woman who was ready to give birth, to devour her Child as soon as it was born (Rev. 12:3–5).

In these verses we see the dreadful dragon, so strong and cruel. It is Satan himself. He is red because that symbolizes his murderous lust for blood. Satan’s seven heads symbolize his perfect, diabolical wisdom. His horns symbolize his complete earthly power.

Satan is the ultimate rebel. He has a tail so long he is able to sweep a third of the stars from heaven. These are not literal stars but symbols. Satan once was called Lucifer, “son of the morning,” and was considered one of God’s most beautiful angels; but he rebelled (Isa. 14:13–14). No sooner had he unsheathed his sword of insurrection than the thunders of Jehovah’s wrath rolled through heaven.

God judged Satan and cast him out of heaven. And when he fell, one-third of the angels fell with him.

Does that bother you? Well, let me encourage you that two-thirds of the angels didn’t fall, and therefore we have two angels for every demon. And Satan and every demon’s destiny is hell (Mt. 25:41). God did not make hell for you. God made hell for the Devil and his angels. If you go to hell, you will be an intruder, unless you choose to follow Satan.

Hell is Satan’s ultimate destiny. But let’s look at his unrelenting desire in this passage of Revelation: “to devour her Child as soon as it was born” (Rev. 12:4). Satan’s ultimate war is with the Lord Jesus Christ. But he could not stop God’s plan. Jesus was born, lived a sinless life, died on the cross, was buried, walked out of that grave a victorious Savior, and ascended the high hills of glory. Until Jesus returns, Satan will continue to hate Israel. I love Jesus, and I love the Jewish people if for no other reason than the fact that Satan hates them.

Israel’s Spiritual Fight
Israel’s real fight is not against flesh and blood; it is a spiritual fight against satanic forces in the heavenly and earthly realms (12:6–12).

War in Heaven. On one side of the war in heaven is the dragon, and on the other side are Michael the Archangel and his angels. The war is being waged to cast Satan out of heaven. “Well,” you ask, “I thought Satan was already cast out of heaven?” Yes, but in the providential plans of God, Satan has been allowed access to heaven and Earth. Though he has been disenfranchised, God still allows him to accuse all of the saints before God. Indeed, it is a mystery. Night and day, day and night, he accuses us; and he torments Israel. Thank God we have a defense attorney named Jesus. He is our Advocate before the Father (1 Jn. 2:1). Satan is on his way down.

War on Earth. “They overcame him by the blood of the Lamb” (Rev. 12:11). Jesus won the victory over Satan in His death on the cross and resurrection from the grave (Jn. 12:30–32). Satan’s back was broken at the cross. And since that time, Satan has been sailing a sinking ship. The blood of Jesus Christ conquers and cleanses us as we confess and repent (1 Jn. 1:7–9).

Revelation 12:11 says, “And they overcame him by the blood of the Lamb and by the word of their testimony” (italics added). Your testimony is a mighty power to overcoming the Devil. Simply by testifying who Jesus is, who you are in Christ, and who Satan is you can be victorious. By the authority of Christ you can declare, “Satan, I know who you are. You’re a liar! My sins are under His blood. You have no authority in my life. I am His blood-bought child. You’re trespassing on my Father’s property. And in the name of Jesus be gone!”

May we individually and those of like mind in Israel have the courage of the apostle Paul who said,

According to my earnest expectation and hope that in nothing I shall be ashamed, but with all boldness, as always, so now also Christ will be magnified in my body, whether by life or by death. For to me, to live is Christ, and to die is gain. But if I live on in the flesh, this will mean fruit from my labor; yet what I shall choose I cannot tell (Phil. 1:20–22).

Israel’s Strategic Flight
When Satan realizes that he can no longer accuse the saints before God, he will turn with intensity to the “woman” and begin to persecute Israel: “Now when the dragon saw that he had been cast to the earth, he persecuted the woman who gave birth to the male Child” (Rev. 12:13). This is the Great Tribulation after the Rapture of the church. About three and a half years into the Tribulation, the Temple will be rebuilt. And when this happens, the Antichrist will move into that Temple and declare that he is God. Israel will realize it has been betrayed, and the Jewish people will refuse to serve him.

Revelation 12:14 says the wings of an eagle will carry them away. When the Devil sees them flee, he will send a flood of persecution. But the Bible says, “So shall they fear the name of the Lᴏʀᴅ from the west, and His glory from the rising of the sun; when the enemy comes in like a flood, the Spirit of the Lᴏʀᴅ will lift up a standard against him” (Isa. 59:19). What does all of this mean? God knows the future. God is still in control.

Israel’s Saving Faith
The time will then arrive when the Jewish people will recognize and receive their Messiah. God’s Word is full of verses that support this prophecy (Zech. 12:10; 13:1; Rom. 11:25–26).

Friend, it makes me shouting happy to know that God has not forsaken His ancient people. There’s going to be a fountain opened to them that is filled with the purifying blood of the Lord Jesus (Zech. 13:1). How can we go about our day-to-day lives without giving everything we have to Jesus Christ? How can we not love Him with a burning, blazing, passionate, emotional love? We are to love whom God loves, and God loves His Chosen People. He has made them a blessing that they might be a blessing to the world.

Thank God there is coming a day when all of this will unfold. I may not have every jot and tittle correct because we’re dealing with things hard to see and hard to interpret. But I have this much correct: Jesus is Lord, and He’s coming again. Praise His name! 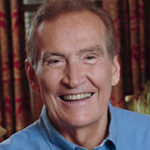 1 thought on “Why I Love Israel”

Sometimes special people cross our paths, showing us the best of what Christianity is all about. Let us introduce you to a few of these saints who have made a difference in life on this earth.

Christ did for us at Calvary. The blessings that accrue to us are manifold, and so are the responsibilities.

What does it take to live a holy life? If you can faithfully master three important points, you’re well on your way.

world are bound to encounter opposition. And though suffering for one’s faith may be difficult, it produces some undeniable and sometimes surprising benefits.

The Lord of the universe knows everything about you, including your needs. This excellent article explains how you can depend on Him because He is the perfect CARE-giver.