The year was 1938. The place was Nazi Germany. Hitler was in control. He had forged his master plan. It included world conquest and the establishment of an Aryan master race. In the mind of this depraved genius, the Jews were a mongrel race – they were a cancer that had to be cut out from among humanity. The Pharaohs and Hamans of history had not succeeded, but Hitler wasn’t sure it couldn’t be done.

It was easy to convince the German people that the Jews were responsible for all of the ills of society. Theological liberalism had paved the way. Higher criticism, so called, had its greatest “champions” in Germany. These wolves in sheep’s clothing denied the trustworthiness of the Scriptures, denied Christ’s virgin birth, denied Christ’s substitutionary death, denied Christ’s bodily resurrection and denied Christ’s promised return. The result was a breakdown of moral absolutes and the emergence of situation ethics, which eventually led to humanism. The practical result was that man was reduced to the level of the animal world. He could now act with bestiality. And Adolf Hitler came on the scene to encourage him to do so.

It is almost certainly true that the Holocaust (and perhaps the Second World War itself) would never have occurred had the atmosphere in Germany not been created by a departure from the historic principles of the Christian faith.

But it did occur. And goose-stepping Nazi soldiers hunted and hounded, plundered and raped Jews across a continent. And when it was over, five and one-half million were murdered in the concentration and death camps of the Third Reich and before their special firing squads in Russia.

And all the while, the world remained silent in the face of these atrocities.

The Roman church was bribed to remain silent by Benito Mussolini. He dispatched agents to Palestine to buy “holy sites,” and then sent Italy’s leading architect, Antonio Barlazzi, to design and build churches on these sites. Among them was the Church of Beatitudes on the northern shore of the Sea of Galilee. This “bribe” brought peace and “silence” between the long-feuding Italian government and the Papacy.

The Protestant church, for its part, raised few and mostly anemic voices of protest.

And Western governments refused to raise their immigration quotas to allow fleeing Jews a place of refuge. Literally tens of thousands perished who could have been saved.

But there were some rays of light – some exploits of courage – like King Christian X of Denmark and his people, who stood courageously behind their Jewish citizens. And there were the Corrie Ten Booms who risked their lives again and again to hide and rescue fleeing Jews. To such, the Israeli government has paid tribute. In Jerusalem, outside the memorial to the Holocaust, is a beautiful garden promenade. On markers are listed the names of a multitude of heroes. This promenade is called, most appropriately, “The Trail of the Righteous Gentiles.”

And in 1938, in the city of Philadelphia, a small band of righteous Christian pastors and laymen were deeply disturbed. They saw the millions of helpless Jewish people who were caught in the maelstrom – fleeing from one country to another – frightened, bewildered, with no shelter, no food – not knowing where to turn, seemingly with none to pity.

The Great Shepherd moved upon this group to establish The Friends of Israel Refugee Relief Committee, Inc.

And through the generous gifts of some of the Lord’s sons and daughters, the hungry were fed, the ravaged were helped, and the gospel of salvation was proclaimed. Thus a great Christian organization was born, manifesting the love of the Savior to the Jewish people. When, five years later in 1943, the first issue of ISRAEL MY GLORY was published, listed among those distinguished committee members were Victor Buksbazen (who would direct the Mission for more than thirty years), Louis S. Bauman, L. S. Chafer, Harry Rimmer, G. Allen Fleece, Norman Harrison, Will Houghten, Harry A. Ironside, Clarence Mac Artney, T. Roland Philips, Wilbur M. Smith, Andrew Telford and Robert Mc Quilkin.

Following the war and the end of the Jewish refugee problem, the name of the Mission was changed to The Friends of Israel Missionary and Relief Society. In 1973, the Mission name was changed for a third time to more accurately reflect its evangelical missionary thrust.

Today, The Friends of Israel Gospel Ministry, Inc. stands as a testimony to the faithfulness of God and the Great Shepherd’s abiding concern for the lost sheep of the house of Israel.

The year 1983 marks the 45th anniversary of The Friends of Israel Gospel Ministry, Inc.

The year 1983 marks the 40th anniversary of ISRAEL MY GLORY, the magazine you now hold in your hand.

The year 1983 marks the 35th anniversary of the modern state of Israel.

By faith, the founders of the Mission named it The Friends of Israel ten years before the nation of Israel came into being. Through the years, literally hundreds of thousands of people have been touched and nudged Heavenward by the Mission’s faithful, uncompromising, worldwide proclamation of the gospel of the Lord Jesus Christ.

Today, the Mission stands on an urgent threshold of unparalleled opportunity. By His grace, we will not – we dare not – we must not draw back from pulling some of Israel’s disquieted, fearful, and confused sons and daughters as brands from the fire.

For victory, we rest wholly on the omnipotence and faithfulness of our God, to whom we gratefully owe our origin and to whom we confidently entrust our future. 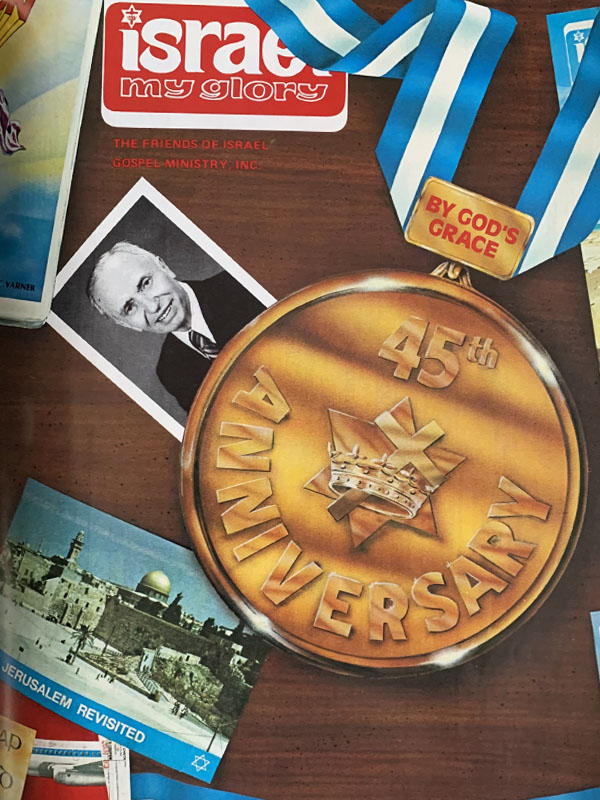