The year was 1961. The season was fall in all of its October beauty. The mood was joyous for in a week I would be marrying the most wonderful girl in the world. As I began the three-block walk to the bus that would start me on the short journey to her home, I began to reflect on my past life. It had begun normal enough some twenty-five years earlier. My parents were typical middle-class American Jews, not quite as religious as my orthodox grandparents, but proud of their Jewish heritage. My early years were spent, in part, with exposure to Jewish custom, the synagogue, and preparation for the inevitable Bar Mitzvah at age 13, which made me a son of the law.

There was nothing on the horizon, therefore, to indicate that during my sixteenth year both my mother and myself would have encounters with God that would dramatically transform our future lives. The encounter of which I speak was not so much emotional as intellectual, culminating with the deep seated conviction that Jesus Christ of Nazareth was indeed the promised Messiah of Israel, and Saviour of all who will put their trust in Him. (Of this I hope to be able to speak more on another occasion).

My eighteenth year saw my quest for adventure satisfied with enlistment into the United States Marine Corp. Lessons about life and human nature were learned that are absent from the formal learning situation. Two years after my discharge from the service, the same God who had long ago led Abraham from Ur of the Chaldees to the Promised Land led a young Jewish lad to the Philadelphia College of Bible—there to be grounded in His Word.

As I approached the bus stop, I felt an inner compulsion to return home for my Bible (I was later to realize that this was the prompting of the Holy Spirit) and upon getting it, started my trip a second time.

Once on the bus, my hands turned inadvertently to the account of the call of Moses at the burning bush (Exodus 3). I read and re-read the story—God’s gracious invitation to Moses for service and the law-giver’s stubborn refusal, “Who am I . . . but, behold, they will not believe me . . . I am not eloquent . . .” to which God replied, “I will be with thee . . . ,” “I will empower thee . . . ,” “who hath made man’s mouth?” Then suddenly, strangely, in a way I shall never be able to fully understand, it was no longer God speaking to Moses, but God speaking to me. The bush burned but, was not consumed. The ground upon which I was standing was holy ground. Is it any wonder that as I left the bus my soon-to-be wife who was waiting for me pondered the cause of the tears that were flowing freely down my cheeks. Of two things I was certain: 1—I had had an unusual encounter with God; and 2—I knew that He intended for me to minister to my brethren, according to the flesh. A week later I was united in marriage to a helpmeet who was committed to assist me in whatever way the Lord directed.

Upon the completion of undergraduate study, two more years of graduate study was undertaken at Dallas Theological Seminary, during which time we maintained our interest and involvement in Jewish missions.

In June of 1967 my wife and I responded affirmatively to an invitation to pastor a newly-formed church in southern New Jersey. By all standards it was a pioneer work. That little band of believers had nothing of material value (the first year services were held alternately in the auditorium of an old school and when weather permitted in a tent which was erected on our newly acquired property), but a courageous and determined faith in God. Today, five years later, Calvary Baptist Church has an impressive modern plant, and a growth rate that makes it one of the fastest growing churches in the State. Few things could woo us away from our beloved friends and co-laborers—but God’s reminder of an incident eleven years ago on a bus between Pennsylvania and New Jersey could—that an abiding love for God’s covenant people Israel coupled with the conviction that this is God’s will for our lives.

We feel both privileged and humbled to be permitted to labor upon a foundation so faithfully and competently laid by Dr. and Mrs. Buksbazen and their co-workers through the years.

During this time of unprecedented opportunity, may our God help us to do great exploits for His glory as we await the sound of the trumpet. 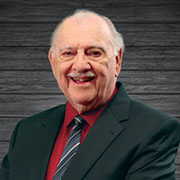