Adonai is the third of the three primary names for God. It is the least used of the primary names, occurring about three hundred and fifteen times. But its significance and application to man cannot be overstated. As with all of God’s names, Adonai reveals an aspect of the divine character that sets Him apart from and infinitely higher than all other beings. As the name Elohim — the strong, faithful One — can be identified in the Authorized King James Version because it is written capital “G” and lower case “od,” or God; and Jehovah — the self-existent, eternal,  “I AM THAT I AM” One — can be recognized because it is written in all capital letters, either “LORD” or “GOD;” so Adonai can be recognized because it is written with a capital “L” and lower case “ord” or Lord.

Elohim, a generic name for God in the Hebrew Old Testament, appears to be similar to the Greek, Theos, translated God in the New Testament. Jehovah, a name that emphasizes God’s holiness, justice and provision for sin in the Old Testament, parallels the New Testament name Iesous or Jesus: “. . . thou shalt call his name Jesus; for he shall save his people from their sins” (Mt. 1:21). And this should not be a surprise, inasmuch as Jesus identifies Himself as the Jehovah of the Jewish Scriptures (Jn. 8:58; cp. Ex. 3:14). And the Old Testament Adonai, suggesting Sovereign, Master, Owner or Lord, parallels very closely the New Testament Kurios, which clearly conveys a similar meaning (Lk. 6:46; Mt. 25:11-12; 1 Cor. 12:3).

Adonai is a lengthened form of the word Adon, which is sometimes used for human relationships. Sarah called her husband Abraham her adon, “lord” (Gen. 18:12); and when Jacob, who had stolen his brother Esau’s birthright, meekly returned after twenty years of self-exile, he referred to his brother as his adon, “lord” (Gen. 33:8,13-14). When used of human relationships, the Authorized King James Version uses all lower case letters for lord in contrast to a capital “L” and lower case “ord” when it refers to God.

If Adonai is acknowledged as the Sovereign, Master, Owner and Lord, the one acknowledging Him as such must view himself as a servant or bondslave. If the Lord is my Shepherd, I am His sheep. If the Lord is my Master, I am His servant. It’s that precise, and there is no getting around it. The Adonai has every right to expect total, unquestioning obedience. And the servant can rest in the assurance that the Adonai will always give clear direction, adequate provision and omnipotent protection. The Adonai never assigns His servant a task that He does not empower him to accomplish. If Adonai commands that His servant jump through a wall, it is the servant’s responsibility to run as fast as he can and jump as hard as he is able — it is the Adonai’s responsibility to make the hole in the wall.

Many of the divine names are first revealed in Genesis, the book of beginnings and to Abraham, the spiritual father of all those who come to God through faith in Christ. And the first reference of a divine name in the Bible tends to reveal its significance.

In Genesis fourteen the story of Abram’s deliverance of his nephew Lot is recorded. Arming 318 trained servants born in his own household, Abram pursued four armies from the east. These armies had defeated five nations in the Dead Sea basin area, including Sodom and Gomorrah, and carried Lot and others off into captivity. In a daring raid he rescued his nephew and the spoils of war. Returning from the conquest, Abram encountered Melchizedek, a king-priest of the Most High God, who ruled over Salem (modern day Jerusalem). He blessed Abram in the name of El Elyon* — the Most High God, possessor of Heaven and earth, who had given Abram the victory. Abram acknowledged his loyalty to the Most High God by giving a tenth of the spoils to Melchizedek, His priest-king. When the king of Sodom appeared on the scene seeking Abram’s loyalty, the patriarch refused to give it. He said to the king of Sodom, “. . . I have lifted up mine hand unto the LORD, the most high God, the possessor of heaven and earth” (Gen. 14:22). He had made his choice, his loyalty would be to El Elyon who had given him the victory.

The next chapter opens with these instructive words, “After these things the word of the Lord came unto Abram in a vision, saying, Fear not, Abram: I am thy shield, and thy exceedingly great reward” (Gen. 15:1). God never wastes words. He never says “Fear not” to His own unless they are fearful. Abram must have been reflecting on recent events. There comes a time when kings go forth to war, and when they did, four kings from the east would be looking for a shepherd by the name of Abram. They had a score to settle. Further, he had offended the powerful king of Sodom — perhaps he had acted too hastily — perhaps his loyalty to the Most High God was misplaced. And so, God said, “. . . Fear not, Abram: I am thy shield [he need not worry, God would protect him], and thy exceedingly great reward [he had not kept any of the spoils of war but God would provide for him far greater treasure].”

His King was the Most High God. His King was possessor of Heaven and earth. His King would be his shield. His King would be his exceedingly great reward. Here was the Sovereign, the Master, the Owner of all things. And so, Abram put his King to the test and said, “. . . Lord [Adonai, the first use of this name in the Bible] God, what wilt thou give me, seeing I go childless . . . ?” (Gen. 15:2). In effect, Abram was saying, You’re the Lord, I’m the servant. You promised me a seed, and I don’t see how you will bring it to pass. In response, God reiterated His promise of a seed and a land to Abram (Gen. 15:4-7). Abram pressed for confirmation, “And he said, Lord [Adonai] God, whereby shall I know that I shall inherit it?” (Gen. 15:8). And in one of the most solemn texts in the Bible, the Adonai (Sovereign, Master, Owner, Lord) enters into an agreement — an unconditional covenant that He will be Abram’s shield and exceedingly great reward. His posterity will endure hardships but be protected, and His land will be safeguarded through the centuries (Gen. 15:9-21).

To be fair, it must be added that the disobedience of Moses probably stemmed from the fact that he was the meekest of all men (Num. 12:3).

And though he started poorly and faltered a few times along the way, he finished gloriously well. After his death, when God was looking for a successor, He said to Joshua, “Moses, my servant, is dead . . .” (Josh. 1:2). Moses could have rightly been called a lawgiver, a prophet, a statesman, a miracle worker, a general, a judge — but the divine eulogy was “servant.” And the commentary on Moses in the New Testament is that Moses was a faithful servant (Heb. 3:2, 5). It should always be remembered that God is not looking for great preachers, educators or missionaries — He is looking for faithful servants, ordinary men and women that He can mold into “vessels unto honor”  fit for the Master’s use.

Saul of Tarsus was on the Damascus road. He was confident that he was serving the God of his fathers — that he was a defender of truth — an opponent of heresy. Those who followed the Nazarene, this recently crucified Jesus, and who were proclaiming His Messiahship were a danger to the Jewish faith. Zealous for the traditions of his fathers, Saul would stamp out this sect. He had letters from the chief priest, and soon he would arrive in Damascus to have those who believed in this way, whether they were men or women, bound and brought unto Jerusalem (Acts 9:1-2).

And suddenly there was a light from Heaven. “. . . he fell to the earth, and heard a voice saying unto him, Saul, Saul, why persecutest thou me?” (Acts 9:4). Saul was stunned — to whom did this voice from above belong? “And he said, Who art thou, Lord? . . . ” (Acts 9:5). It was Jesus, the very One whose followers he was persecuting. “And he, trembling and astonished, said, Lord [Kurios, the New Testament equivalent of the Hebrew Adonai], what wilt thou have me to do?. . .” (Acts 9:6). Instantly he realized that Jesus was the Sovereign, Master, Owner, Lord, and that he was the servant. It was the Lord’s to command and his to obey.

The reason is simple. He could never forget his initial encounter with Christ. He inquired, Who are you, Lord? What do you want me to do, Lord? And he did it for the rest of his life, Jesus was the Adonai — the Sovereign, the Master, the Owner, the Lord. Paul was the servant. He had to obey his Lord’s command. It was the consuming force in his life, and at its end he would proclaim,  “I have fought a good fight, I have finished my course, I have kept the faith; Henceforth there is laid up for me a crown of righteousness, which the Lord [Adonai], the righteous judge, shall give me at that day . . .” (2 Tim. 4:7-8).

Perhaps the greatest contradiction in all the Word of God was annunciated by the Master himself. He inquired, “. . . why call ye me, Lord, Lord, and do not the things which I say?” (Lk. 6:46).

If Jesus is our Lord, then we are His servants. He possesses an inherent right to command. Our great privilege is the potential for unquestioning obedience. He has promised that He will provide direction, provision and protection for the journey. And, as a loving, gracious, omnipotent Sovereign, He will only do His servants good in this life and the life to come.

Pious Jews sing an old hymn entitled “Adon ‘Olam” meaning “The Everlasting Lord.” We can do no better than to close this article with its God-exalting, theologically accurate beautiful lyrics.

The Lord of all, who reigned supreme
Ere first Creation’s form was framed;
When all was finished by His will
His Name Almighty was proclaimed.

When this our world shall be no more,
In majesty He still shall reign,
Who was, who is, who will for aye
In endless glory still remain.

Alone is He, beyond compare,
Without division or ally;
Without initial date or end,
Omnipotent He rules on high.

He is my God and Savior too,
To whom I turn in sorrow’s hour –
My banner proud, my refuge sure –
Who hears and answers with His power.

Then in His hand myself I lay,
And trusting, sleep; and wake with cheer;
My soul and body are His care;
The Lord doth guard, I have no fear! 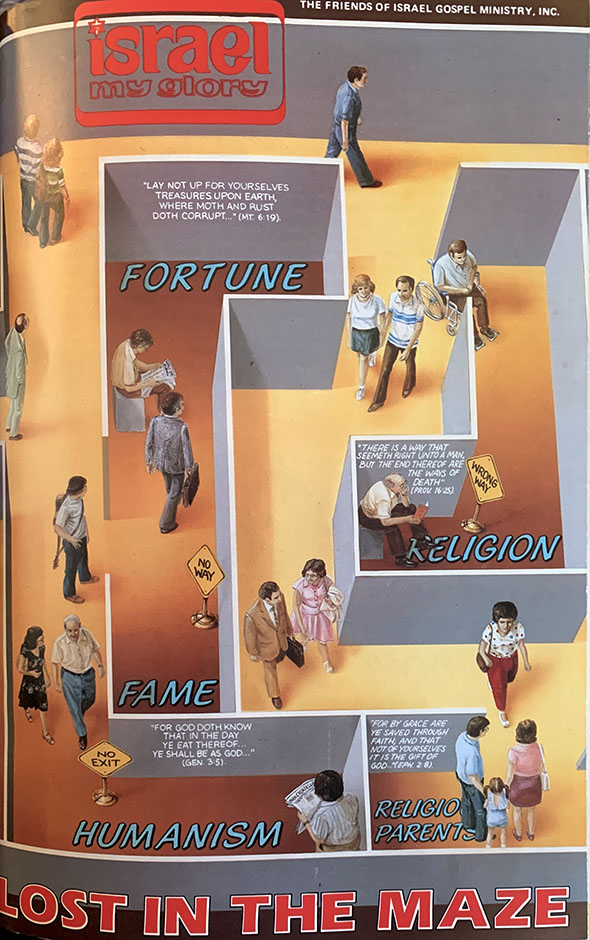