AN UNEASY TENSION: Jews and Christians Through the Ages Part Two

For the first two hundred years of church history the relationship between Christians and their Jewish neighbors is best character­ized by the phrase, an “uneasy tension.” During this period, there was no evidence of outright Christian persecution of the Jews. The Jewish leadership, however, sought to repress the Nazarenes and eventually expelled them from the Jewish community.

Jewish-Christian relationships underwent a complete turnaround in the fourth century A.D. The persecuted became the persecutor. When the Emperor Constantine declared himself to be a Christian, he began to favor the previously persecuted Church and to suppress paganism and Judaism. Although Judaism had previously enjoyed a “legal re­ligion” status, when Christianity became the official religion of the Empire, the Jews began to suffer severe repression of their rights. It has often been said that the worst event to happen to the Church was the “conversion” of the Emperor Constantine. The Church gained temporal power while losing its spiritual power.

In 315 A.D., Constantine forbade Jews to make proselytes, thus denying Judaism the opportunity of being a missionary religion. In 439 A.D., Jews were denied the privilege of holding public offices as well as denied the privilege of constructing new synagogues (repair of old ones was permitted!). In 531 A. D., the Emperor Justinian forbade Jews from ever testifying in court against an “orthodox Christian.” These discriminatory laws en­trenched the second-class status of the Jew and set the stage for the miserable events of Jewish existence in the Middle Ages.

The sad thing is that these and other secular laws were religiously motivated. The influence of theologians on treatment of the Jews can best be illustrated by summarizing the basic theological position of the Jew in the medieval ages. According to this view, the Jewish peo­ple are condemned to eternal servitude for the crucifixion of Jesus. They should not be killed, however, but instead preserved in a life worse than death. A remnant should be scat­tered and through their Scriptures, as well as through their bodily existence, serve as eter­nal witnesses for Christendom that the proph­ecies concerning Christ were true. Until the last judgment, they were to remain in ser­vitude and inferiority.

Two points should be noted about this “theological anti-Semitism” which has pre­vailed in church history down to the present day in many circles. Firstly, this so-called “the­ology” is found nowhere in the New Test­ament. This often comes as a surprise to Jewish people who assume that the “Gentile” book, about which they have been warned, nowhere presents the Jewish people in such a way. Secondly, this “theology” can be traced to Augustine and some other early church fathers whose theological system had no place in it for the Jews. Today their system is known as covenant theology and is some­times referred to as “amillennialism.” This system teaches that all of the promises to Israel have been inherited by the Church, Christ is presently reigning as King, and we have been in the Millennial Kingdom since the first advent. Therefore,  there is no place for the Jews in God’s plan. It is easy to see how this position manifested itself politically in the succeeding centuries.

Consider the following examples of Jewish-Christian relations in the Middle Ages. in 1096, the First Crusade to liberate the “Holy Sepulchre” from the Moslems was launched. Itinerant preachers, such as Peter the Hermit, stirred up the ignorant rabble into a frenzy of religious hatred. These misguided bands of zealots joined other knights in marching off in a “crusade” to do God’s work with a sword. Most of the “crusaders” passed through the Rhine Valley of Germany where they encoun­tered Jewish communities in Worms, Speyer, Mainz, and Cologne. The monks accom­panying the mobs reminded them that Jews were enemies of Christ as well. Therefore, they set upon the helpless communities, giving individuals the choice of immediate baptism or death. Most of the Jews surrendered their lives and were massacred in their own homes. Although some archbishops tried to hide Jews in their castles, they too were overtaken by the frenzied “crusaders.” It is conservatively estimated that almost 10,000 Jews perished during this crusade and the two following ones in 1145 and 1189. With exposure to this kind of “Christianity,” it is no surprise that so few Jews willingly followed the Savior in the succeeding centuries. It is sad to say, but Jews saw little of the true Jesus in the lives of those who professed to follow Him.

Another religiously oriented lie which has been foisted upon the Jewish people is the “blood libel.”’ During the Passover season in 1144, a young boy named William disap­peared in Norwich, England.The rumor spread that the Jews had kidnapped, tortured, and murdered William, then drained his blood to use in preparing their matzo for Passover! This absurd attack was not withdrawn when the boy was later found in a field with all of his blood. Supported by the local religious author­ities, attacks were made on the local Jewish community. This was the first of a long series of such “blood libels” that spread throughout England, France, Germany, and Poland. Thousands of Jews have been imprisoned, killed, and burned alive on this charge. Even though no solid proof was ever given, and even the Pope himself frequently denounced the charge, the evil rumor spread like a cancer and has even appeared on occasions in the “enlightened” twentieth century.

Discussion of the messiahship of Jesus and the way of salvation is essential in any witness between Jew and Christian. However, such “discussion” in the Middle Ages had a different twist to it. Occasionally, the church authorities would require the Jewish communities to engage in a formal disputation or debate with certain church theologians. Such events proved to be occasions for open persecution against Jews. In 1240, four rabbis were re­quired to defend the Talmud in Paris. When the Talmud was condemned for its “blasphe­mies,” the Pope ordered the seizure of all copies, and twenty-four cartloads of precious manuscripts went up in flames.

In 1263, the great scholar Nachmanides debated with a Jewish Christian named Paul about whether the Messiah had come. The issues involved were not really important — the judges were all church dignitaries. The result was the eventual exile of Nachmanides and forced conversions among some com­munities in Spain. The most celebrated dis­putation began in 1412 in Tortosa, Spain and continued for nearly two years. Again the judge of the debate was the Spanish king, and many communities suffered forced conver­sions as a result.

This humiliating treatment was inter­spersed with various attacks on Jewish com­munities throughout Europe, when the mob cry was “Baptism or Death.” Widespread forced conversions in Spain during the two decades following 1391 created an inter­esting problem for the Church. Many Jews feigned Christianity and continued to ob­serve Judaism in secret. They were called “Marranos,”’ and their succeeding genera­tions became the cause of the infamous Spanish Inquisition which began in 1480.The Inquisition did not persecute professing Jews, but sought to discover those professing Christians who secretly observed “heresies.” The number of victims of the inquisition in Spain and Portugal staggers the imagination. The last “burning at the stake” took place in the 19th century, yet small pockets of Mar­ranos have continued in Spain down to the present day.

The preceding are just a few of the tribula­tions suffered by the Jews in the Middle Ages at the hands of so-called Christians. The wholesale expulsions from England in 1290, from France in 1306, and from Spain in 1492, the Black Death persecutions in 1348-50, and the Chmielnicki Massacres of 1648, although not directly related to the Church, would never have taken place without the environ­ment created by “theological anti-Semitism.”

This is a dismal chapter in Jewish-Christian relations but should help Christians today to better relate their faith to Jewish people. It will help us to understand why the cross and Christianity are offensive to so many Jews. Most Jewish people have not rejected the gospel since they have never heard a faithful presentation of the gospel! Persecution in Christ’s name has often been their only ex­posure to Christianity. How desperate is the need for true followers of Jesus to reach out in love with the message of life to their Jewish friends.

In the next article in this series, we will try to bring this account of the “Uneasy Tension” down to the present day. We will see that there have been and are some exceptions to the sad story which has been related thus far. 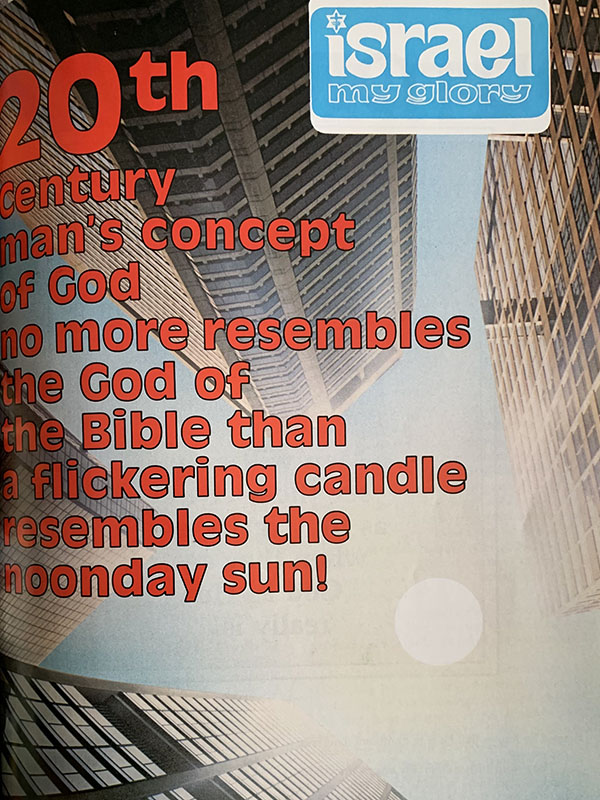