In the previous issue of Israel My Glory, Pastor Steve Kreloff dealt with two of three truths that Paul presented to the objector in Romans chapter nine concerning the sovereignty of God.

The latter of the two truths dealt with the purposes of God. God’s eternal purposes are fulfilled through His sovereign election. One reason God allows sin and suffering to continue, instead of wiping out a world in rebellion to Him and sending them all to Hell, is that He has mercifully chosen some of these rebels to be vessels of mercy. These vessels have been prepared beforehand for glory. They were chosen in Christ before the foundation of the world (Eph. 1:4). Yet in order for these chosen ones to experience salvation, God continues to endure “with much longsuffering the vessels of wrath fitted to destruction” (Rom. 9:22).

In this issue, Pastor Kreloff addresses the last of the three truths -the promises of God in connection with His sovereignty.

Someone has compared divine election to getting married –you think you are making the choice, but in reality you have already been chosen. We only wish that the doctrine of election could be so easily understood as the concept of choosing a spouse. However, election cannot be reduced to a mere human illustration. It is a biblical truth that goes beyond man’s capacity to grasp.

In Romans, chapter 9, Paul was faced with the objection of a man who challenged God’s right to harden the hearts of the nonelect and yet hold them responsible for being hard (Rom. 9:19). Instead of attempting to reconcile the tension that exists between divine sovereignty and human responsibility, Paul answered this objector by informing him of three truths about God. Paul wisely recognized that his objector’s struggle over election stemmed more from a failure to understand the nature of the God who elects, rather than the doctrine of election itself.

In the last article, we found the power of God (Rom. 9:20-21) and the purposes of God (Rom. 9:22-24) as truths that support the doctrine of election. just as a potter has power over a piece of clay to mold it into whatever he chooses, so God has the sovereign right to do whatever He desires with a man. Also, through election, God’s purposes are fulfilled as He allows mankind to continue in rebellion in order that He might make known the riches of His glory upon a few chosen vessels of mercy. The third truth about God which Paul presented to the objector concerned Old Testament promises to save these vessels of mercy (Rom. 9:25- 29).

The Promises of God

While the Apostle Paul had previously referred to the Hebrew Scriptures in defending God’s righteous dealings with Israel (Rom. 9:9-18), he had not mentioned any specific Old Testament passage that promised salvation to an elect remnant of Israel. Therefore, in verses 25- 29 Paul called upon two prophets, Hosea and Isaiah, to prove that God’s messengers predicted salvation would come to only a chosen minority of the Hebrew nation. Therefore, the truth of sovereign election is soundly based upon the promises of God as revealed through the ancient prophets.

The first promise to which Paul referred came from the Book of Hosea. He wrote, “As he saith also in Hosea, I will call them my people, who were not my people; and her beloved, who was not beloved. And it shall come to pass that, in the place where it was said unto them, Ye are not my people, there shall they be called the sons of the living God” (Rom. 9:25-26). Hosea was God’s spokesman to Israel during a time of extreme national unfaithfulness to the Lord. Israel was depicted as the idolatrous and unfaithful wife of Jehovah. As a result of her sin, she was on the verge of being taken captive by the empire of Assyria.

It was to this adulterous nation that God sent Hosea. However, Hosea was more than a messenger to his people, for he was made a living illustration of God’s love toward Israel. Hosea’s wife, Gomer, turned out to be a prostitute (Hos. 1:2-3). Their relationship became a picture of God’s relationship to Israel. Hosea represented God as the loving husband, and Gomer represented Israel as the adulterous wife.

When Gomer’ s second and third children were born, God told Hosea to give them names which expressed His dismay with Israel’s behavior. The second child was named “Lo-ruhamah” (Hos. 1:6), which means unpitied and no mercy. As a result of Israel’s sin, God removed His compassion from the nation. He would have no pity on her. The third child was named “Lo-ammi” (Hos. 1:9), which means not my people or no kin of mine. While God’s attitude toward unfaithful Israel was to sever His relationship with her, the Lord mercifully promised to restore her to His favor. However, this promise of mercy is reserved only for a remnant within the nation of Israel. Paul quoted another prophet, Isaiah, to develop his point concerning mercy for the remnant.

Quoting Isaiah 10:22-23, Paul wrote, “Isaiah also crieth out concerning Israel. Though the number of the children of Israel be as the sand of the sea, a remnant shall be saved; For he will finish the work, and cut it short in righteousness; because a short work will the Lord make upon the earth” (Rom. 9:27-28). Even in Isaiah’s day, God predicted that only a remnant would be shown mercy. Although the population of Israel was considerable, only a minority of the Israelites survived the Assyrian captivity and returned physically to Israel and spiritually to God. While the number of Israel is like the sand of the sea, God has promised to save only a remnant. His mercy extends to only a chosen few.

What if God had not promised to save a remnant of Jewish people? Paul once again turned to the Prophet Isaiah and answered that question. He wrote, “And as Isaiah said before, Except the Lord of Sabaoth had left us a seed, we had been as Sodom, and been made like unto Gomorrah” (Rom. 9:29). Sodom and Gomorrah were ancient cities noted for their wickedness. In Genesis 18, God told Abraham that He would preserve these cities from judgment if ten righteous citizens could be found. However, because a godly remnant of that number did not exist in Sodom and Gomorrah, God completely annihilated those cities.

In Isaiah’s day, Israel was in a state of wicked rebellion. She was characterized as a “sinful nation,” a “people laden with iniquity” and “a seed of evildoers” (Isa. 1:4). She was spiritually diagnosed as having a sick head, a faint heart and a body full of bruises, welts and raw wounds (Isa. 1:6). To this corrupt people Isaiah announced that the only reason their fate was not the same as that of Sodom and Gomorrah was because they possessed something those cities lacked – a godly remnant!

By quoting Isaiah 1:9, Paul made the same point as the Old Testament prophet. The survival of the Jewish people is rooted in the fact that God has preserved for Himself a chosen remnant within the nation of Israel. Had God withheld His mercy and not saved some chosen Israelites, the nation would have been completely destroyed. No one can legitimately complain about Israel not being saved. Election of a Jewish remnant is the means by which the nation has been physically spared. What tremendous implications this truth has for us today. Hebrew Christians  are often rejected and ostracized by the Jewish community. They are falsely accused of no longer being Jewish and charged with attempting to destroy the Jewish  people by their evangelistic efforts. Yet, according to the Prophet Isaiah and the Apostle Paul, Hebrew Christians, as the remnant, are the very reason the Jewish people have been preserved. Far from destroying Israel, God used Jewish believers to form the basis for Israel’s continued survival. How ironic it is that the people considered a threat to the Jewish community are, in reality, the very reason the Jewish community continues to exist.

God could have and would have destroyed Israel long ago, except that He had a chosen remnant to save. Today, He continues to preserve the Jewish people in order that the remainder of the remnant will be saved (c.f. Rom. 9:22-24). This truth should encourage every Christian involved in Jewish evangelism, for it indicates that some Jewish people will turn to Christ. While the majority continue in unbelief, God always has a remnant of Hebrew believers who have faith in Him. In a ministry that does not often yield significant results, it is important to remember that God has promised to save some Jewish people.

Down through the centuries, God has always preserved for Himself a remnant of godly Jewish people. The history of the Jewish nation reveals only a faithful few who walked with the Lord in obedience. Even during the darkest days of apostasy, God reminded the Prophet Elijah of seven thousand Israelites “all the knees which have not bowed unto Baal” (1 Ki. 19:18; cp. Rom. 11:4). It is no coincidence that every generation has some Jewish people who know the Lord. The remnant is a result of God’s promise to extend mercy to a chosen few.

In focusing on Old Testament promises of God’s mercy to a chosen remnant, Paul informed the arrogant challenger of a vital truth about the God he accused of being unjust (Rom. 9:19). This God keeps His promises. To the individual who complained that election was unfair to the nonelect, Paul’s point was that election does not destroy anyone; but, rather, it fulfills God’s promise of mercy to a chosen remnant. The man who dared to irreverently accuse God of being unjust because of sovereign election failed to understand that a chosen remnant is a fulfillment of God’s promise. Far from suggesting the failure of God’s Word (Rom. 8:6), an elect remnant proves the faithfulness of God’s Word.

The accuser’s objection concerning God’s hardening a man’s heart yet holding him responsible for his hardness was never dealt with by Paul in these verses. Instead, Paul focused on the character of the God who elects. However, as difficult as the truth about God’s hardening people may be, it must be understood that people are not lost because God hardens them. His hardening process doesn’t make them unbelievers; but, rather, because they are already willfully hardened unbelievers, God hardens them more. This was precisely what He did in Pharaoh’s case. No one is lost because he was elected to be lost. Election and predestination are terms used in the Bible to refer only to the saved (or those who will be saved). They never refer to the unsaved. No one is ever predestined to Hell. Then why are people lost? More specifically, why was the vast majority of Jewish people of Paul’s day lost? In the next article, we will examine how Paul treated the issue of Israel’s unbelief of Christ.

From the Editor:
Divine sovereignty and free will (better, human responsibility) have been a subject of great debate throughout the ages. Calvinists suggest that man is spiritually dead and therefore can do nothing for himself, that salvation is all of grace. Armenians suggest that man is only spiritually sick and therefore can cooperate with God in the salvation process.

This third in a series of articles by Pastor Kreloff is an honest attempt at exegesis of Romans chapter nine.  His conclusions will never satisfy everyone, but they are an honest, scholarly interpretation of a difficult text by a man whose heart is aflame with passion for personal evangelism and with a burden for the souls of men. 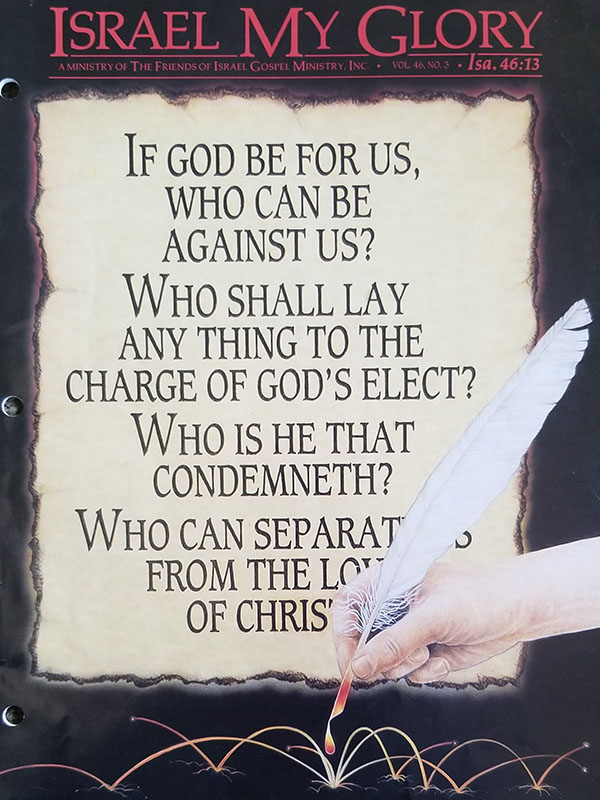