Some things seem almost too absurd to be true. But life is filled with absurdities when it comes to Israel. Do you see the ladder in the photo below? It has leaned against the Church of the Holy Sepulchre in Jerusalem for at least 150 years. 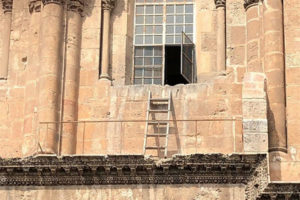 Six religious denominations share the church and must stay within their designated areas—or else. “On a stifling summer day in 2002,” reported Slate.com, “a monk moved his chair eight inches to find shade. This was interpreted as a hostile act and violation of boundaries, and 11 were hospitalized after the fight that ensued.” Over eight inches!

Understandably, no one dares remove the ladder. Some say it’s been there since the 1700s, some say the 1800s. But it cannot be relocated unless all the denominations agree. So there it stands.

Like the Church of the Holy Sepulchre, Israel houses several people groups, some of which will go to absurd lengths to stake their claims. When the United States announced plans to move its embassy from Tel Aviv to Jerusalem, the Arabs promised a fight. Last year the United Nations Educational, Scientific and Cultural Organization (UNESCO) declared the Tomb of the Patriarchs in Hebron to be a Palestinian heritage site, even though everyone buried there is considered Jewish: Abraham and Sarah, Isaac and Rebekah, and Jacob and Leah.

Palestinian Authority Chairman Mahmoud Abbas claims the Arabs of Samaria, Judea, and Gaza descended from the Canaanites, even though “it is a historic fact that Arabs actually arrived in Israel in the 7th century C.E. [AD],” writes Israelnationalnews.com.

A volatile situation for sure. So this issue of Israel My Glory explores portions of the book of Ezekiel in which God, the definitive boundary-maker, explains who owns the land and who eventually will live in it in peace. Enjoy!

Lorna Simcox is the editor-in-chief of Israel My Glory magazine. She is a Jewish believer who came to know the Lord after spending many years in secular journalism. A graduate of the University of Vermont and Word of Life Bible Institute in Schroon Lake, New York, Lorna is also the author of The Friends of Israel’s popular book The Search, a heartwarming account of how God showed her the truth about Jesus and drew her to Himself.

Some things seem almost too absurd to be true. But life is filled with absurdities when it comes to Israel. Do you see the ladder in the photo below? It has leaned against the Church of the Holy Sepulchre in Jerusalem for at least 150 years...

If I Forget You, O Jerusalem

Among the many things God cares about, three stand out: Israel, Jerusalem, and the Temple. During my Hebrew-school days, I learned about these things in multiple ways. From the Jewish Scriptures, I learned God set Jerusalem in the midst of the...

Ezekiel: The Times, The Man, The Book

The prophet Ezekiel burst onto the scene during Jerusalem’s darkest days at the end of the sixth century BC. Then, as now, the Middle East was in crisis. In fact, the Middle East had been in crisis for most of the eighth and seventh centuries BC due to the...

When God confirmed a covenant with Abraham (Gen. 12:1), He issued a divine proclamation: He vowed to give all the land He was promising Abraham to both Abraham and his descendants forever (13:15). God bequeathed the land through...

The Best is Yet to Come

Leon Uris’s novel Exodus, about the founding of the State of Israel, captivated the world when it came out in 1958. It became an international sensation, rising quickly to number one on The New York Times best-seller list and staying there for eight months...

Today much of the world despises Israel. All it takes to substantiate this truth is a look at the UN’s overwhelming number of anti-Israel resolutions, the countries that have waged war against Israel in hopes of annihilating it, and the news media’s endless caricature of...