“You will never understand the faithfulness of God by taking the short view.” —Paul S. Rees

After the destruction of the second Jewish Temple in A.D. 70, a group of rabbis accompanied Rabbi Akiva up to Jerusalem. When they reached Mount Scopus and the site of the Temple came into view, they tore their garments. When they reached the Temple Mount, they saw a fox dart out from the spot where the Holy of Holies had stood in the Holy Temple. The other rabbis began to weep, but Rabbi Akiva laughed.

“Akiva,” they said to him, “you never cease to amaze us. We are crying, and you laugh!”

But Rabbi Akiva asked, “And you, why are you crying?”

The rabbis responded, “What? Shall we not weep? The place about which Scripture states, ‘and the stranger who draws close shall die,’ has become a den of foxes. Indeed, this is a fulfillment of the verse, ‘For Mt. Zion which lies desolate, foxes prowl over it.’”

“This is exactly why I laugh,” Akiva replied. “For just as we have seen the prophecies of Jerusalem’s destruction come to pass, so, too, know that the prophecies of her future consolation shall also be fulfilled. I laughed because I remembered the verses, ‘Old men and old women will once again sit in the streets of Jerusalem, each with his staff in his hand because of advanced age; and the streets of the city will be filled with boys and girls playing in its streets.’ The Holy One, blessed be He, has declared that, just as the first prophecies have been fulfilled, so shall the latter. I am joyous that the first have already come to pass, for the latter shall be fulfilled in the future.”

Because people throughout history have witnessed the Jewish people’s distress, deportation, and even near-destruction, they are tempted to say God has forgotten His ancient people and cast them aside. But nothing could be more misguided.

God has been unswervingly faithful to His covenant. Through Moses, God told the Israelites what would happen if they obeyed Him and what would happen if they disobeyed. Deuteronomy 28 clearly explains the covenant blessings and curses. The fact that God is faithful in following through with His curses actually proves He will be equally as faithful in bringing forth His blessings.

Just as the curses were literal, the blessings are literal. Israel’s scattering was literal, and so is Israel’s regathering.

In the darkest book of the Bible—Lamentations—the city of Jerusalem and the Solomonic Temple lie in ruins. In the midst of the devastation, the prophet Jeremiah, like Rabbi Akiva, saw a ray of hope: “Though He causes grief, yet He will show compassion according to the multitude of His mercies” (3:32).

Even in times of stern discipline, God has faithfully preserved His people. Have you noticed that every time someone has tried to wipe out the Jewish people, they have ended up with a holiday? Pharaoh tried, and they received Passover. Haman’s attempt backfired, and they got Purim. The anger of Antiochus IV in the Intertestamental Period resulted in the Feast of Lights, usually called Hanukkah. And Hitler’s hatred led to the May 14, 1948, founding of the modern State of Israel.

At every twist and turn, God has been faithful to Israel. Despite numerous deportations, with the final one lasting for 1,900 years to 70 nations, the Jewish people remained distinct. In the late 19th century, even the Hebrew language was revived and restored.

The formation of modern Israel against all odds—often called the “Miracle on the Mediterranean”—may be the greatest miracle of the 20th century. Wrote Randall Price, an archaeologist and president of World of the Bible Ministries,

The fact of the Jewish people’s continuity is even more remarkable in light of the testimony of history to exile and return. In all of human history there have been less than ten deportations of a people group from their native land. These people groups disappeared in history because they assimilated into the nations to which they were exiled. However, the Jewish people did not simply experience a single exile, but multiple exiles….The contrast here with other historical exiles should not be overlooked. While other people groups were exiled to one country, the Jews were dispersed to many different countries, and in fact were scattered to every part of the earth….Moreover, the Jewish people are the only people to have returned en masse to their ancient homeland and to have restored their national independence by re-establishing their former state….Any one of these facts of Israel’s survival would be remarkable, but taken together they are miraculous.1

The establishing of modern Israel is astounding in itself, but the fact that the country is surviving and thriving for 65 years in the middle of a sea of enemies is further testimony to God’s faithfulness to His promise, “He who keeps Israel shall neither slumber nor sleep” (Ps. 121:4). In these events, God is setting the stage for the events of the end-times and His people’s final restoration to the Promised Land.

Every visitor to Israel who travels by plane enters the country the same way—through passport control at Ben Gurion International Airport in Tel Aviv. Once you have passed through there and are about to exit, you are greeted by a huge, colorful tapestry welcoming you to the land.

Millions of people have come and gone through that airport, but most of them probably never noticed the big “welcome” sign. On this tapestry is depicted masses of people streaming in through the gates of the city of Jerusalem. On it, in Hebrew, is a prophetic text from the book of Jeremiah that speaks about the ingathering of the exiles: “‘So there is hope for your future,’ declares the Lᴏʀᴅ. ‘Your children will return to their own land’” (Jer. 31:17 NIV).

Whether or not newly arrived Jewish immigrants can yet read the words, the lesson is understood; for they who are coming home are part of God’s present purpose in regathering His people in faithfulness to the fulfillment of His ancient promise.2

Now may the God of peace Himself sanctify you completely; and may your whole spirit, soul, and body be preserved blameless at the coming of our Lord Jesus Christ. He who calls you is faithful, who also will do it (1 Th. 5:23–24). 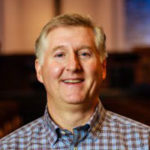 6 thoughts on “God’s Faithfulness to Israel”

Charlie Dyer
Share Your Story. Has God used The Friends of Israel Gospel Ministry in your life? Share your story with us!