I Do Set My Bow In The Cloud

There are a number of covenants that God made in the Old Testament. Most of these covenants are concerned with the people of Israel (Abrahamic, Mosaic, Palestinian, Davidic, and the New Covenant). However, one covenant was made with all mankind — the Noahic Covenant. Its institution is found in Genesis 8:20 through 9:17. The Noahic Covenant regulated life on earth following the flood. In Jewish tradition the “Noahide Laws” compose what God requires of all men, i.e., the Gentiles. Among these laws are the prohibition of blasphemy, idolatry, immorality, murder, and robbery. The basic promise of the Noahic Covenant, however, is found in Genesis 9:11; “And I will establish my covenant with you; neither shall all flesh be cut off any more by the waters of a flood; neither shall there any more be a flood to destroy the earth.” As a token that He would fulfill that promise, God pointed to what we call a rainbow: “And God said. This is the token of the covenant which I make between me and you and every living creature that is with you, for perpetual generations: I do set my bow in the cloud, and it shall be for a token of a covenant between me and the earth” (Gen. 9:12-13). Although some modem city dwellers may never have experienced it, most people today have witnessed the sight of a beautiful rainbow refracting the sunlight following a rain shower. Most of the time the earthbound observer sees only a part of the arc. The most glorious rainbow  I ever saw was in Israel. After a brief rain shower, I walked out onto the balcony of my Tiberias hotel and there witnessed a beautiful spectrum of color arching over almost the entire length of the Sea of Galilee. It was truly a breathtaking panorama. Such a scene should cause us to reflect upon the spiritual implications of the rainbow. It should be noted that the word used in Genesis 9:13, 14, and 16, is actually the word bow [keshet in Hebrew). The word appears 77 times in the Old Testament. The vast majority of times the word appears, it refers either to the hunter’s bow (Gen. 27:3) or the warrior’s bow (1 Sam. 31:3) with which arrows are shot (2 Ki. 13:15). Only in two passages does it refer to the rainbow (Gen. 9 and Ezek. 1:28). The implication of this usage provides a fascinating word picture. When God said, “I do set my bow in the cloud. . .” (Gen. 9:13a), He was hanging up His bow after He had shot it in judgment by the flood. The act of hanging the bow up signified that His wrath had been accomplished, and He would not use that bow again in destroying the earth by a flood. Some modern day parallel would be a cowboy hanging up his spurs or a boxer hanging up his gloves.

Was this the first time a rainbow had ever appeared over the earth? God used the existing practice of circumcision to be the sign of the Abrahamic Covenant (Gen. 17:11). However, it is best to see the rainbow as a new thing that appeared in the sky at this time for two reasons. First, there is no evidence that it rained before Noah’s time, thus a rainbow would be an impossibility. Second, the effectiveness of this sign would be much impaired if it had existed before. A new promise was attested to by a new sign. Note also that the sign of this covenant was not in the body (as circumcision was in the Abrahamic Covenant) because it did not directly involve man. This sign was in the sky that covered the whole earth because it was a promise between God and the earth.

The spiritual symbolism of the rainbow is striking. The rainbow projects from a dark background, thus in the midst of wrath love comes shining through. The rainbow extended from Heaven to earth, thus it proclaims peace between God and man. It was an old German Lutheran tradition to teach a child to pray the Lord’s Prayer whenever he saw a rainbow. Such thoughtful reflection on the faithful promise of God ought to be our practice whenever we see this natural phenomenon.

“And it shall come to pass, when I bring a cloud over the earth, that the bow shall be seen in the cloud; And I will remember my covenant, which is between me and you and every living creature of all flesh; and the waters shall no more become a flood to destroy all flesh” (Gen. 9:14-15). How precious it is to think of what God will and what He will not remember! He will remember His covenant promise, but He will not remember His people’s sins (Jer. 31:34 and Heb. 8:12). The sins of the believer are cast away as far as the east is from the west (Ps. 103:12).

There is a very interesting reference to the rainbow in the Book of Revelation. In John’s vision of the throne in Heaven he beheld the throne-sitter and described Him in this way: “And he that sat was to look upon like a jasper and a sardius stone; and there was a rainbow round about the throne, in sight like an emerald” (Rev. 4:3). From the earth we only see part of the rainbow. Those who have had the privilege of seeing a rainbow in an airplane, however, will tell you that from that vantage point what is seen is not an arc but a complete circle! In Revelation 4:3 the rainbow circles the throne, in other words, we do not yet comprehend the fullness of God’s promise. When we are raptured and glorified, however (Rev. 4:4-5, 8-10), we will behold the fullness of God’s love and grace.

But why is the rainbow in Revelation four described as being emerald? Most people realize that a rainbow is made up of a spectrum of colors. These colors range from the hues of red on the one end to the darker shades of blue on the opposite end of the spectrum.

Why is this rainbow green? An examination of a rainbow will reveal one of the central colors is green. Perhaps this is an answer to the question of why the rainbow in Revelation 4:3 is emerald colored.

The throne scene in Revelation 4 and 5 presents a beautiful picture of how the two seemingly opposite attributes of God, His holiness and His love, come to meet. The throne obviously presents a scene of judgment: “And out of the throne proceeded lightnings and thunderclaps, and voices. . .” (Rev. 4:5a). It also presents a scene of grace: “And I beheld and, lo, in the midst of the throne and of the four living creatures, and in the midst of the elders, stood a Lamb as though it had been slain. . .” (Rev. 5:6a). Only in Christ’s work does the holiness of God and the love of God find reconciliation. The holiness of God demands that He judge sin … that He did on the cross of Christ. The love of God demands that He offer pardon to the sinner . . . that He also did on the cross of Christ.

The psalmist long ago expressed this wonderful truth when he said, “Mercy and truth are met together; righteousness and peace have kissed each other” (Ps. 85:10).

What comes to mind when we see a rainbow? Let us always rejoice in the faithfulness of God whenever we see this beautiful token of His grace and greatness. 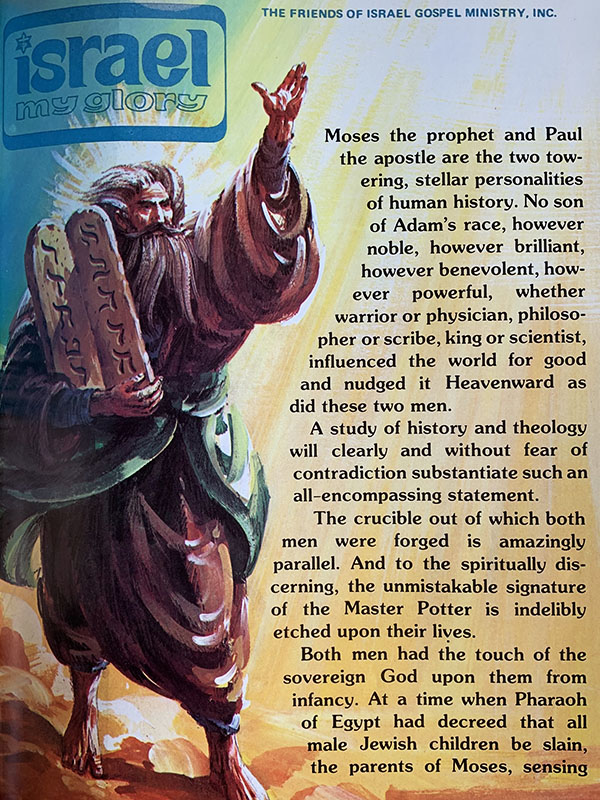