Immanuel, God With Us

Legally, he was the right man for the job, He was a descendant of Abraham, from the tribe of Judah and of the family of David. He had a right to rule over Israel.

Spiritually, he was like an accident looking for a place to happen. He ruled over the southern kingdom of Judah for sixteen years. He opposed God and God’s prophet and caused the children of Israel to sin (2 Ki. 16:1-4).

His name was Ahaz, and he had a problem — a big one. Rezin, king of Syria, and Pekah, king of Israel (the ten northern tribes), were planning to invade Judah (the two southern tribes of Judah and Benjamin) [Isa, 7:1-2].

The Prophet Isaiah was sent by God to inform King Ahaz that this planned attack against the southern kingdom would not succeed —that the two invading nations would themselves be de­feated by the Assyrians (Isa. 8:1-4).

To confirm His word of safety and give assur­ance to Ahaz, God invited the king to ask for a sign — something miraculous — something supernatural — something in the Heaven above or the earth beneath — something that would require the arm of omnipotence (Isa. 7:10-11).

As a result, God turned from the unbelieving king to address the whole house of David. He would give them a sign. But this sign did not deal directly with the impending invasion -— King Ahaz had, through his unbelief, forfeited that right. Now, the sign which God would give to the whole house of David had as its purpose the identifying and authenticating of the righteous King (in contrast to Ahaz who was a wicked king) when He would appear on the stage of human history. He would not only be David’s son — He would be Immanuel, which by interpretation means God with us (Mt. 1:23). Here was a truly staggering pronouncement. This righteous King would be both Son of God and Son of Man.

But how could such a thing come to pass? By what means? Through what process? The answer to these questions is what God provides through the promised sign: “. . . Behold, the virgin shall conceive, and bear a son, and shall call his name Immanuel” (Isa. 7:14).

The Hebrew word for virgin in Isaiah 7:14 is almah. In the singular or plural form, it appears seven times in the Old Testament.

In Genesis 24:16 almah is used to describe Rebekah as a virgin and the future bride of Isaac.

In Exodus 2:8 almah is used of Miriam, the unmarried sister of Moses, as the “maid” (virgin).

In Psalm 68:25 almah is used of damsels (virgins) ministering with timbrels.

In Song of Solomon 1:3 and 6:8 almah is used of the virgins in the royal court.

In every instance where the word occurs, the context strongly favors the translation of almah as virgin.

In the third century before Christ, long years before there was a controversy between Jews and Christians concerning who Christ was — when no one had an ax to grind or a cause to champion — the Jewish scholars who translated the Old Testament Hebrew Bible into the Greek Septuagint rendered the word almah with the Greek word parthenos, which has only one undisputed meaning — VIRGIN. The Greek Parthenon, the ruins of which still stand in diminished glory, was dedicated to the virgin goddess, Athena.

The famous medieval rabbi, Rashi, made this comment concerning Isaiah 7:14: “Behold the almah shall conceive and bear a son and shall call his name ImmanueL This means that our Creator shall be with us. And this is the sign: the one who will conceive is a girl [naarah], who never in her life had intercourse with any man. Upon this one shall the Holy Spirit have power.” *

Thus, one of Israel’s greatest teachers and rabbis, commenting on Isaiah 7:14, acknow­ledged that:

God had promised a sign (the virgin would conceive and bear a child) so that men of faith could recognize the righteous King and eternal God when He made His entrance onto the stage of human history.

And the days turned into weeks, the weeks into months, the months into years and the years into centuries — seven of them. And through the endless days and nights some ridiculed the divine promise of a sign, some ignored the promised sign, and many simply forgot the sign. But the God who is from everlasting to everlast­ing, the God who is a covenant-keeping God, the God who has placed His Word above His name — He did not forget.

Then, one indescribably glorious night it hap­pened! But let Luke, the beloved physician, tell you about it in his own words:

And there were in the same country shep­herds abiding in the field, keeping watch over their flock by night. And, lo, an angel of the Lord came upon them, and the glory of the Lord shone round about them; and they were very much afraid. And the angel said unto them, Fear not; for, behold, I bring you good tidings of great joy, which shall be to all people. For unto you is born this day in the city of David a Savior, who is Christ the Lord. And this shall be a sign unto you: Ye shall find the babe wrapped in swad­dling clothes, lying in a manger (Lk. 2:8-12).

Almost universally it has been understood that the sign is, “Ye shall find the babe wrapped in swaddling clothes, lying in a manger.” But such a sign would be neither miraculous nor supernatural. The swaddling clothes and manger were not the sign, they were simply for identification purposes. What then was the sign of which the angel spoke — the sign that would authenticate at last that God, the righteous King, was in their midst?

May it be solemnly and sacredly suggested that when the shepherds found the Child in the stable, they worshipped and then left. They neither inquired as to who the proud father was nor assumed that Joseph, husband of Mary, held that honor. They properly understood what the angelic messenger meant when he said, “And this shall be a sign [literaIIy, “the sign” in He­brew] unto you . …” They rightly realized that here was the fulfillment of the divine promise given more than seven hundred years earlier: “’… Hear ye now, O house of David: . . . the Lord himself shall give you a sign; Behold,the virgin shall conceive, and bear a son, and shall call his name Immanuel” (Isa. 7:13-14). They realized that in their midst was One in whom all the fullness of the Godhead dwelt bodily (Col. 2:9). Perhaps one final word is appropriate. Where was the virgin-bom Son of God born? In Bethle­hem to be sure — but where? In the stable beneath the inn? That is fable, not fact. Where the Church of the Nativity now stands in Bethlehem square? That is tradition without foundation.

The Bible gives more than a hint that Jesus was born at Migdal Edar on the northern fringe of Bethlehem and about three miles south of Jerusa­lem. Migdal Edar is the place where Rachel, wife of Jacob. gave birth to Benjamin, and it is there that she died and was buried (Gen. 35:19 and 21). So Migdal Edar is a place of life and death in the history of Israel.

Migdal Edar is also the place to which the “first dominion” (that is, the demonstration of the imperial presence of God) would come, accord­ing to the Prophet Micah in a largely neglected prophetic text: “And thou, O tower of the flock, [Heb. Migdal Edar] the stronghold of the daugh­ter of Zion, unto thee shall it come, even the first dominion; the kingdom shall come to the daugh­ter of Jerusalem” (Mic. 4:8) .

It would be natural for Joseph, unable to find room in the inn and with Mary ready to give birth, to retrace his steps to the stable at Migdal Edar which he had doubtless passed a short while before on entering Bethlehem- Benjamin, son of Jacob, had been born there. It would serve for the birthplace of the Son of God.

Migdal Edar literally means the tower of the flock. It was the place in ancient Israel where sheep were raised for ceremonial slaughter at the nearby Temple. These shepherds, who raised lambs for sacrifice, doubtless lived in expectation of the day when God’s Lamb would appear. And what better place for Jesus to be born than at the very spot where lambs were raised for sacrifice? Was He not, in truth, “… the Lamb of God, who taketh away the sin of the world” (Jn. 1:29)? He would be born where lambs were born and die where lambs died.

The infinite, eternal, omnipotent God — the sovereign Creator — the One who fashioned man from the dust of the ground and breathed into him the breath of life — was dwelling in the midst of His creation as one of them- He came for the express purpose of dying for man’s sin.

Can anyone question the angelic announce­ment, “…I bring you good tidings of great joy…to all people” (Lk. 2:10)? 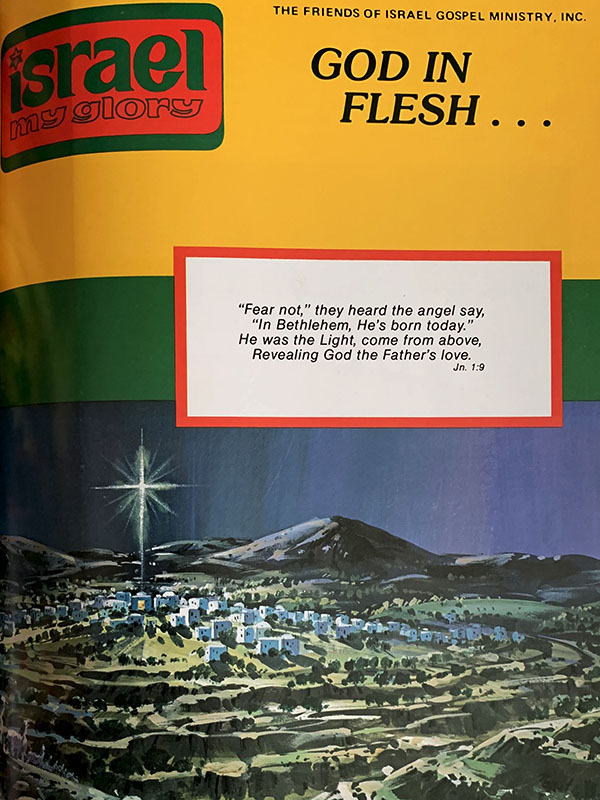