Each year in May, Israel celebrates its rebirth. Established on May 14, 1948, modern Israel is now 71 years old. The fact that the Jewish nation arose from the ashes and has come back to life in its ancestral homeland with its ancient language is unprecedented in history. 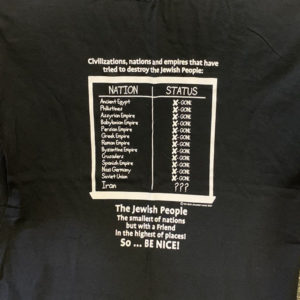 I have a T-shirt I purchased when I visited Kibbutz Misgav Am a few years ago. This small community, located atop a mountain on Israel’s northern border, provides a panoramic view of nearby southern Lebanon––a land occupied and controlled by Hezbollah, an Iranian-supported Arab terrorist group dedicated to Israel’s destruction. Hezbollah has stockpiled more than 200,000 missiles solely to unleash a reign of terror on Israel.

Hezbollah would do well to regard the message printed on the front of my T-shirt. It lists 12 civilizations that once tried to destroy the Jewish people and are gone today. Yet the Jewish people still stand, and Israel is alive and doing extremely well.

Indeed, the return and revival of a nation that was so decisively defeated and scattered throughout the world is unique. We must ask what is different about Israel that it still exists when so many mighty nations that sought to destroy it have disappeared.

The answer is also on my T-shirt: “The Jewish People. The smallest of nations but with a Friend in the highest of places!” The Jewish people’s preservation throughout the ages is associated with God’s purpose in raising them up in the first place: to be the people through whom He would redeem this world from the curse of sin.

Their restoration aligns with God’s promise to return them to the Land of Promise prior to the return of His Redeemer, the Messiah. In Isaiah and Ezekiel, God foretold of a day when He would bring the Jewish people back from the lands to which He scattered them.

Today we see them coming home. Last year haaretz.com reported that 29,600 Jewish people made Aliyah, that is to say, they immigrated to Israel. Their return is part of a phenomenon that began in the late 19th century and continues to this day. Israel’s Law of Return ensures that anyone who is Jewish has the right to move to Israel and become an immediate citizen. The Friends of Israel Gospel Ministry collects funds for Aliyah to help Jewish people return to their ancestral land.

The population of Israel continues its upward growth. Globes, an Israeli business-news website, reported that, by the end of 2018, Israel’s population had grown to roughly 9 million, of which 74 percent, or 6.7 million, are Jewish; 21 percent, or 1.9 million, are Arab; and 5 percent, or 426,000, are other people groups.

Just as God is at work bringing the Jewish people back to their land, He is also bringing the world to Israel to see His modern miracle. Tourism reached an all-time high of 4 million visitors in 2018, according to The Jerusalem Post.

Further evidence of God’s blessing is Israel’s steady economic growth. Last year Israeli exports hit a record-breaking $110 billion, an increase of 8 percent over 2017, israelhayom.com reported. A remarkable figure for such a tiny country.

Every time I visit Israel, I am blessed to see our heavenly Father’s miraculous work. Oh, if Israel’s enemies could but see the fallacy of their dreams to wipe the tiny Jewish nation off the map and instead embrace God’s desire that we bless the Jewish people (Gen. 12:3).

As the T-shirt I got at Misgav Am reminds us, all those who tried to annihilate God’s people (and there were many) failed. Modern Israel is a testimony that God will not be thwarted in His plan to redeem this world from the curse of sin—and His plan runs right through Israel!

Jim Showers is the executive director and president of The Friends of Israel Gospel Ministry.

“When that plane touches down at Ben Gurion Airport in Tel Aviv,” someone told me recently, “I know I’m in a country that’s a miracle...

For centuries, Jewish people have been asking themselves, “Who is a Jew?” Today a new wrinkle has developed, and it involves Christians...

A Look at Life in Israel

Many of our readers have asked us what life is like in Israel, especially for Jewish believers in Jesus. So we asked Meno Kalisher to answer a few questions for us...

The Battle for Biblical Truth

Modern Israel is a miracle. When Mark Twain visited there in the 1800s, he left thinking it was the most miserable place on the face of the earth...

Many Americans scratch their heads trying to figure out Israel's political system. Here's an overview of it from someone who truly understands it...

What do you do when you have no place to go for Shabbat? That’s when the Lone Soldier Center in Memory of Michael Levin becomes a lifesaver—in more ways than one...