Jerusalem! The very name commands a fascination. No other city in the world has been both adorned and devastated so many times by so many different peoples over so many centuries. A brief historic glimpse at this curious icon of the ages may shed some light on her enigmatic appeal to the hearts of millions.

The earliest biblical mention of the city is in the account of Abraham being greeted by Melchizedek (King of Righteousness) from Salem after Abraham’s campaign against the five kings (Gen. 14). The term Salem is from an ancient language and is similar to the Hebrew word Shalom, meaning peace.

Salem was a fortified city on a high southern ridge confined by two valleys—the Kidron Valley on the east and the Tyropaean (Cheesemakers) Valley on the west, which today is only a shallow depression. The early inhabitants of this ridge were the Amorites and the Hittites (Josh. 10:5; Ezek. 16:3), who referred to it as Zion. Later the Jebusites took control of the ridge and fortress (Jud. 19:10). It was a desirable location, as the natural terrain offered added defense to the city fortress, and there was a sure supply of water from the nearby Gihon Spring.

King David wanted the fortress because he believed it was well suited as a central capital for the 12 tribes of Israel. In a remarkable piece of military strategy, David’s men penetrated up the water shaft to the city and captured it (2 Sam. 5:6–9). The fortress was then named “the city of David” (1 Chr. 11:7). The city became even more desirable to the Israelites when David brought the Ark of the Covenant to Zion (2 Sam. 6:12–15). The world was to know that the Lord who dwelt between the golden cherubs dwelt on Mount Zion (Isa. 8:18).

David purchased the bare threshing floor of Araunah, north of the city, and built an altar to the Lord (2 Sam. 24:18–25), offering sacrifices there. On this winding north ridge, David’s son, Solomon, later constructed the first Temple, a magnificent structure in which to worship the Lord (1 Ki. 5–6; 2 Chr. 3–4). Under the leadership of King Solomon, Jerusalem became a major city whose power stretched from the Gulf of Aqaba in the south to the Euphrates River in the north. After the death of Solomon, Jerusalem became the capital of a divided kingdom (1 Ki. 12:16). Although it was a chaotic period, the city did expand to the northwest and the southeast.

Soon Sennacherib, king of Assyria, wanted the city (2 Chr. 32:1). To prevent his seizing control, King Hezekiah built an underground tunnel to channel the water from the Gihon Spring to pools inside the city, thus depriving the Assyrian army of a water supply (2 Chr. 32:30). In one evening, the angel of the Lord smote 185,000 Assyrians, forcing Sennacherib to retreat to Nineveh without his prize (2 Ki. 19:35–36).

Because of Jerusalem’s severe apostasy in the centuries that followed, God put in the heart of King Nebuchadnezzar of Babylon a desire for Jerusalem (Jer. 32:28–29). After an 18-month siege, the city was sacked and demolished. The beautiful Temple of Solomon was looted and destroyed, and the people of Judah were taken captive to Babylon, where they remained for 70 years.

Conquerors through the centuries have set their sights on Jerusalem, the most desired city in the world. Could it be because Jerusalem is the “city of the great King” (Ps. 48:2)?

Jerusalem survived in the hearts of her exiled children in Babylon through a song: “If I forget thee, O Jerusalem, let my right hand forget her cunning” (Ps. 137:5). A small pioneering remnant returned to Jerusalem under the edict of King Cyrus of Persia in 530 B.C. (2 Chr. 36:22–23). On the ruined Temple Mount they constructed a temporary altar for sacrifices and observed the Feast of Tabernacles for the first time in 70 years (Ezra 3:1–6). Encouraged by two prophets, Haggai and Zechariah, the remnant rebuilt the house of the Lord by 520 B.C. However, the city walls were still in ruins.

In 444 B.C., Nehemiah, a cupbearer for the king of Persia, became burdened about the walls and gates of Jerusalem. His main objective was to provide basic defense for its inhabitants. Under his leadership, the ancient walls of David and Solomon were rebuilt. Very little expansion took place for the next three centuries, during which Jerusalem vacillated between war and peace.

An abomination at the Temple occurred in 167 B.C. Jerusalem was literally and spiritually attacked by the Greeks from Syria. Worship of the true God was abolished, and a statue of the Greek god Zeus was set up in the Holy of Holies. This sacrilege was committed by the fiend Antiochus IV Epiphanes. The Orthodox Jews revolted. One family, the Maccabbees, helped liberate the city and its Temple, and eventually the Greek influence was removed from Jerusalem and the Temple was rededicated to the Lord. The Feast of Hanukkah (Dedication, Jn. 10:22) resulted from this episode in Jerusalem’s history.

The Prophet Zechariah predicted that one day the Messiah would come to Jerusalem riding on a donkey (Zech. 9:9). Centuries later, on a spring day, Jesus came riding on a donkey, through a festive Passover crowd, into the city (Mt. 21:6–9). Jerusalem would never be the same. No event, either before or since, has made the walls and streets of that city more hallowed and sacred than when God, in the flesh, walked in Jerusalem.

After the crucifixion of Christ, Rome sacked Jerusalem, destroyed the Temple, and converted it into a pagan city, which it remained for the next 195 years. However, in 313 A.D., Christianity became the official religion of the Roman Empire. Helena, the mother of Emperor Constantine, launched an aggressive program to embellish Jerusalem with shrines and churches at all the sites associated with Jesus’ ministry. The most lavish structure built during that period was the Church of the Holy Sepulchre. Christian pilgrims visited those holy sites for the next 313 years. During that time, known as the Byzantine period, the Temple Mount was deliberately left in ruins until the Arabs took control of the city in the seventh century. Most of the churches were then destroyed and replace with mosques and minarets. The Temple Mount was cleared, the platform was washed with rose water, and the Dome of the Rock was built to honor Muhammed.

Today, as dawn breaks over Jerusalem, pious Jews at the Western Wall daven and chant their traditional prayers. A few hundred yards away, within the ornate confines of the Church of the Holy Sepulchre, mass is said. From the Al Aksa Mosque on the Temple Mount, the thin, eerie wail of the muezzin calls Muslims to prayer. Jerusalem is a holy icon to millions.

Herod the Great ruled Jerusalem with cruelty from 37 B.C. to 4 A.D. In spite of his despotism, however, he was a master builder. It was he who expanded the boundaries of the city walls, and his major contribution was the remodeling of the Temple and the doubling of the size of its platform. By the time Herod’s grand plans were completed (64 A.D.), the dark Roman shadow of death and destruction had fallen across the city. But even the rabbis of the period were impressed by Herod’s achievements. They would say, “He who did not see Jerusalem before its destruction has never in his days seen a beautiful city.”

Jesus once said about the Temple and Jerusalem, “Behold, your house is left unto you desolate” (Mt. 23:38). In 66 A.D., Jewish Zealots went to war with Rome. It started in Caesarea but ended in Jerusalem. The year was 70 A.D., and four battle-hardened Roman legions under the command of Titus besieged the city. In 139 days, this combined force of 65,000 men completely wasted Jerusalem. Graphic evidence remains today—such as burnt houses and ancient water drains clogged with human skulls and bones—depicting this monstrous destruction. The words of Jesus indeed came to pass.

Sixty-two years later (132–135 A.D.), another Zealot war with Rome broke out, resulting in Jerusalem’s being razed and rebuilt as a Roman city. They renamed it Aelia Capitolina. A pagan shrine to Zeus was placed on the Temple Mount, and a temple to the goddess Venus was erected over Golgotha. For centuries to follow, no Jews were permitted to enter the city.

A radical change in Jerusalem occurred in 1099 A.D.—amid great bloodshed. From the time of the Persian invasion in 638 A.D., Islam had possessed the city. Then, 461 years later, Christian Europe called for a Crusade to recapture Jerusalem from the “infidel.” On the morning of July 15, 1099, a French knight, Godfrey of Bouillon, breached the city’s north wall and led his Crusaders in a systematic massacre of all of Jerusalem’s inhabitants. By nightfall, the mutilated bodies of Jews, Muslims, and Christians filled the streets of the city of peace. The Crusaders repaired and improved the city, and today the Church of the Holy Sepulchre and many other structures throughout the city reflect the architecture of this medieval period. The Muslims reclaimed the city 88 years later, and the city was again ravaged.

Since the liberation and unification of East Jerusalem during the 1967 war, contention and strife have continued to reign within its walls. It has been said that modern Jerusalem is the great slaughterhouse of the religions.

Religion has been a source of trouble for Jerusalem through the ages. During the Second Temple period, Jews barred Gentiles from the inner Jewish courts. When the Muslims first built the Dome of the Rock they excluded non-Muslims from the Temple Mount. There was a time prior to 1967 when Jews were prohibited from entering the Church of the Holy Sepulchre or even walking past its entrance. Further fueling this hatred are the warring ethnic groups jealously guarding their respective pieces of the divided city.

Everlasting peace will never come to Jerusalem through the efforts of religion. Only through a personal relationship with Jesus Christ is peace possible (Rom. 5:1). The wars between differing groups of men will never cease because of the sin nature (Jas. 4:1). But one day—perhaps soon—the Prince of Peace will return and this city of pieces will become the city of peace, harmony, and love.

In spite of Jerusalem’s erratic history and often dismal state of affairs, believers in Jesus Christ—both Jews and Gentiles—will always have their hearts shackled to its walls. Why? Because they know that a glorious future lies ahead for that city. The Messiah Jesus is coming back to Jerusalem! Till then, Shaalu Shalom Yerushalayim—“Pray for the peace of Jerusalem” (Ps. 122:6). 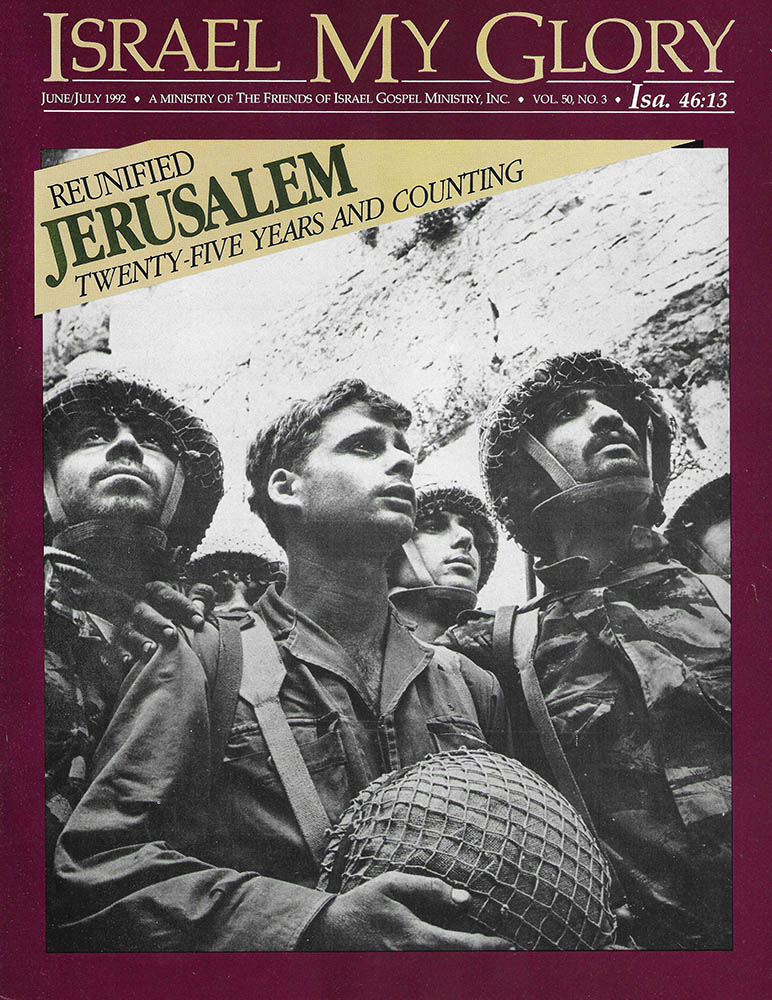 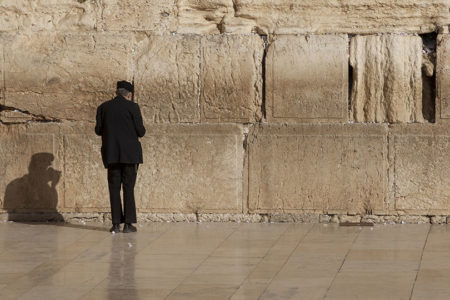 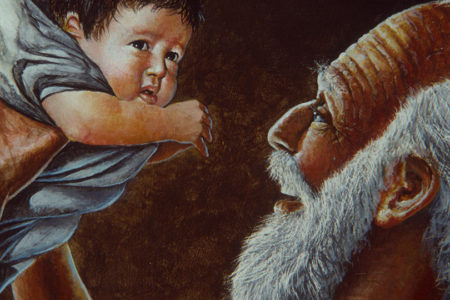