While traveling recently, I met and spoke with two men who are representatives of the educational system in Israel.  They had just returned from a visit to the United States to observe the schools in that country.  I was seated  near them and could hear their discussion, and eventually they invited me to join their conversation.

After a few introductory remarks, I  gathered  the courage to ask some questions. First I asked, “Is faith in God spoken of in the schools of Israel?  Is it part of the education of our young people?” They replied, “God is associated with religion.” “I am aware of that,’ I said, “but isn’t it a law in Israel that all schools must teach the Bible, from kindergarten through high school?” My new acquaintances became very defensive and asked if I were opposed to this. “No,” I replied, “but I am against the fact that the Bible is not taught in its entirety.” They were surprised at my remark and said, “We do not understand what you mean. Please explain that statement.” I responded, “It is impossible to divide God into parts. He is one God, and we must understand this. It is the same with the Bible. It should not be divided into parts but should  be taught and studied as a whole. Because the Bible is not taught in its entirety in our schools, our young people do not have a true knowledge of faith in God, even though they read the Bible every day. They study only a part of the Bible rather than everything that is written in the Word of God. Yes, I am speaking of the New Testament. It is a necessary part of our faith in God, and our students should be studying it.”

These men were shocked by my statement and asked  “Are you serious?” “Yes,” I answered. Then they asked, “Do you read the New Testament?”  “I certainly do,”  I  replied and continued by saying, “There are many religious books taught in our public schools. It is the same in the religious schools. The students spend most of their time studying the commentary books  written  by men through the centuries; and the Bible, the true Word of God, has taken a back seat. It has become subordinate in our faith. The result is that all the studying done by students in the public schools and the religious schools – even the  intensive study of the rabbis – is without value. In the Talmud itself it is written, ‘Without the study of the Law, there is no seemliness.'”

The men then asked, “Do you  believe that the New Testament  belongs to the Law of God?”  “Of  course it does,” I  replied. “Do you  expect us to believe that?”  they  asked. I  told  them, “It is  as  clear  to  me  as the sun at noonday. I  have with me the Hebrew Bible, and I will be glad  to show you  what I  mean.” “Do you     carry the Bible with you all the time?” they asked. “Oh yes,” I  replied. “For me, the Bible is like the personal weapon of a soldier. Let me show you from this spiritual weapon the truth I just shared with you.”

I  opened  the  Bible  to Jeremiah  31:31-32 and read, “Behold, the days come, saith the Lᴏʀᴅ, that I will make a new covenant with the house of Israel, and with the house of Judah,  Not  according to the covenant that I made with their fathers in the day that I took them by the hand to bring them out of the land of Egypt, which, my covenant, they broke, although I was an husband unto them, saith the Lᴏʀᴅ.” I explained, “The New Testament is clearly mentioned in that passage, as well as in many, many other passages in the Old Testament.”

Now they were curious and asked if I were a Bible teacher.  I responded, “No, I have never been a teacher. But I believe in the living God, and I believe in His completed Word to us, from beginning to end. The Jewish people have rejected the part of the Bible which they do not think is good for them, but that is wrong. As you know, Abraham came to the people and preached the Word of God. He had not studied at a great theological school. No! He simply accepted by faith what God told him, and he imparted God’s Word to the people. Eventually God gave the Law to Moses on Mount Sinai, but Abraham knew nothing about that.”

When I mentioned the Law, they were quick to tell me, “We accept the Law but not the New Testament. We realize now that you want to change our minds about the New Testament.” “My friends, I do not want to change you or anyone else, but it is my desire that everyone comes to know the truth which has been given by God himself. In Revelation 1:8 it is written, ‘I am Alpha and Omega, the beginning and the ending, saith the Lord, who is, and who was, and who is to come, the Almighty.’ This same theme, which I just read from the New Testament, is repeated throughout the entire Bible, both the Old and New Testaments; but the things which are taught in most of the commentary books cannot be found in the Bible. Now tell me, which book should have priority on our schools? The Bible or the books written by men which teach nothing of the true Word of God?”

As so often occurs, these men became interested in my faith and asked how I had come to believe in the Lord as I do and why I believe the New Testament. I had a good opportunity to share my testimony with them and concluded by saying, “My faith is in the Lord who said, ‘I am Alpha and Omega, the beginning and the ending.’ People who think I am wrong and that they can thwart God and His plan for the world are living a lie. The only answer to the question of how to have faith in God is found in the Lord Jesus Christ.”

When we arrived at our destination and said our goodbyes, my traveling companions shook my hand and said, “We are glad we had the opportunity to spend some time with you.  Our discussion was very interesting.” I pray that during our time together the Lord may have planted a seed in their hearts which He will water and eventually give the harvest by bringing them to salvation in Himself. Just think what an impact these men could have on the young people of our nation if they had a true relationship with the Messiah of Israel! 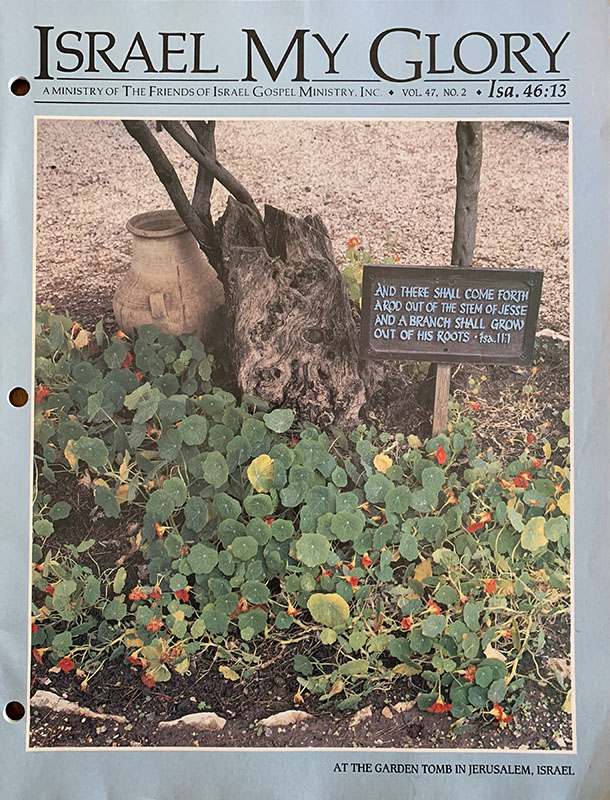