In the days preceding Christmas, many people in Israel ask believers, “How can God have a birthday?” The concept of the birth of Jesus is very hard for the Jewish people to accept. I am always asked during the Christmas season, “Why do you want the Jews to be partners in your fantasy and to dance around the gold calf with the Christians?” But after they ask such a question, they don’t want to give me an opportunity to reply. I receive only attacks because, in their eyes, I am guilty of a great deception. I recently said to such a group of people, “lf you have any more questions, ask them now, and when you are finished I will answer your questions – but the answer may surprise you.” Then they began to fire off a series of questions: “Why are you so happy at this time of the year?” “Why do you make such a big celebration on Christmas day?” “Who was really born on that day?” “Wasn’t He only a man, a man named Jesus, a human being just like us?” “Why have you created such a fantasy about Him?” “Who was this Jesus?” “Why did He come?”

When they had exhausted their list of questions, I responded, “I will answer you, but let me begin by telling you a story. Once, on a very cold winter day, a man noticed a small bird outside his window. He realized that the bird wanted to come in and warm itself, but the window was closed. The man wanted to help the bird, and so he opened the window to let it come in, but the poor bird became frightened and flew away. The man felt sorry for the bird and wished that he could become a bird so he could speak to the frightened creature and invite it into his home to get warm.

“The Jewish people are just like that poor bird,” I told my listeners. “Our forefathers were afraid of what they could not see; therefore, they did not want to do what the Lord expected of them. But God loved them very much and did not want them to fly off on their own and be lost forever. And so, in His great mercy, He sent His own Son to us in the form of a man. His Son spoke with us in our own language, telling us what God was really like and how much He loved us. Then He suffered and died for us – in our place – so that we could be reconciled to God. Because of this, we can be happy in the Lord, we can sing and praise His holy name, especially around this time of year when we commemorate His coming from Heaven to earth.” These people listened very intently and seemed interested, but when I finished they said, “That was a nice story, but it is only for Christians. There is nothing written in our Jewish Bible about Jesus.” I replied, “l told you that you would receive a surprise when I answered your questions, and now I will show you that surprise. I will show you from the Jewish Scriptures one of the songs sung by Christians at this time of year to welcome our Lord and Savior, and we sing it in the Hebrew language.” I then opened my Bible and read Zechariah 9:9, “Rejoice greatly, O daughter of Zion; shout, O daughter of Jerusalem; behold, thy King cometh unto thee; he is just, and having salvation.” I then continued, “We do not sing this on Christmas day just to keep alive a fantasy about a mere man. Jesus came from Heaven to the earth because mankind had sunk deep into sin, and there was no way for them to be saved. It was necessary for God to send Him – His only begotten Son – in the form of a man, so that mankind could get a clear picture of God and so that we could speak with Him face to face, as a loving father speaks with his children. On the Day of Atonement we pray, ‘Wash me thoroughly from mine iniquity, and cleanse me from my sin’ [Ps. 51:2]. When the Lord Jesus came to earth and gave Himself for us, it was to cleanse us from our everlasting sin.

“At the beginning of our conversation you asked why Christians are so happy at Christmas. Now I ask you, why should we not be happy? The Lord has come; He has saved us by the shedding of His blood; and if we accept His sacrifice on our behalf, we can be sure of spending eternity in Heaven with Him.”

Once again, my listeners said, “This is only a Christian story, found in Christian books. It is not for the Jews.” I countered by saying, “The stories which you hear from the rabbis are so old that they should have long beards by now, but they are only stories – false stories handed down from generation to generation. I want to hear something new from you. But, even more than that, I want to hear something that is based on the true and living Word of God and not the stories you have received through the centuries from false teachers. Please examine the Scriptures for yourselves and open your minds and hearts to their teachings. Draw your own conclusions and do not rely on what the rabbis tell you. If you will do this, then I would be glad to speak with you again.”

I praise the Lord that they were open to my proposal, and one of the men said, “We want to be more serious about this. Tell us the importance of the coming of the Messiah.” I was thrilled at this response and said, “If you are truly interested, you can read about the coming of the Messiah in your own Jewish Bible. Such passages as Micah 5:2; Isaiah 7:14; 9:6-7 and the entire 53rd chapter of Isaiah will give you a very clear picture of His coming and who He is. If you have the time, I would be glad to read these passages and discuss them with you, and I can also show you many other passages pertaining to the Messiah.” I was delighted that they were willing to read over the Scriptures with me, and when we were finished I asked, “Now do you understand why I am so happy in Him? Do you realize why it is a joy to glorify His holy name and sing praises to Him? Or do you need more proof? Is the Bible not enough? Do you think the stories of the rabbis are true and more relevant to the Messiah than what we have read from the Holy Scriptures?” “Oh, no!” they said. “The Bible is the only book!” “If this is so, what are you waiting for?” I asked. “Why not believe in your hearts all that we have read, and then you too can share in the joy of this season when we celebrate the coming of the Lord to the earth for the Jewish people and all the other peoples of the world. Wouldn’t you too like to be happy about the birth of the Messiah?”

They all agreed that they were very happy I had explained the significance of Christmas, and they promised to think carefully about all that I had told them and to read the Scripture passages again.

There are many people in the world, and everyone has the privilege of being saved if he or she comes to the Lord according to the way He has ordained in His Word. And because of this, every person has the right to hear the good news of the incarnation of the Lord Jesus Christ and of His death and resurrection which accomplished the forgiveness of sins, the salvation of the soul and the assurance of eternity in Heaven with Him for everyone who yields his or her life to the Savior. We cannot save people, but we can be guides and point others to the One who is “the light of the world” (Jn. 8:12). Please pray with me that these people will come to their Messiah, the Lord Jesus, the Savior of the world. 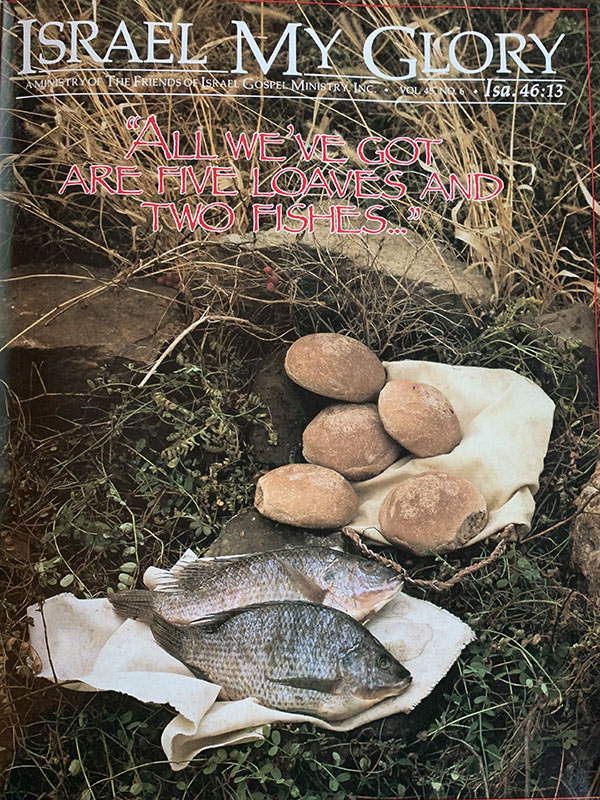