I live in an apartment-type building in Jerusalem, and all the residents own their own flats. We have a “house committee” to represent the residents, and for ten years I was a member of that committee. Over the years I made many good friends among the residents, and often I was invited to their homes or I invited them to my home. During those ten years, we lived together as one big family, and I had good conversations with many of my neighbors about a variety of subjects, including my faith. I always gave them a clear explanation of what I believe and in whom I believe. The residents came to understand who I was and what I stood for, and because of my openness, many came to like me and were even sympathetic toward me when I was attacked by ultra-orthodox Jews because of my faith.

When my last term on the house committee was completed, I was replaced by a man who is a relatively new resident in the building. As we always say, “The king is dead. Long live the new king!” This new committee member soon began asking questions about all the residents – what kind of work they do, how they live, etc. He wanted to know things that did not concern him. Everyone began to say that he was like a private detective, and then we learned that he is a member of an ultra-orthodox religious group and was reporting to the group about all the residents in our building.

Eventually he got around to me and my family. Every month we pay a fee for maintenance, and  he came to my home to collect this money. I could tell immediately that he is very nosy because as he walked through the door, he began to ask questions: “How well do you live? Do you go to the synagogue on the Sabbath? How do you believe? In what ways do you serve God?” I listened to his questions, and when he was done I said, “I will answer you, but first you must answer a question for me. How many gods must we serve?” “Only one,” he replied. I continued, “I believe in the living God of whom it is written in the holy Scriptures, ‘Hear, O Israel: The Lᴏʀᴅ our God is one Lᴏʀᴅ’ (Dt. 6:4). Now please tell me, which god do you worship?” He answered, “That is a stupid question. As I said before, there is only one God, the God of the Jewish people, and that is the God I worship. All the other so-called gods are nothing more than idols, and  even though all the other people in the world worship these idols, the Jewish people worship the one true God.” I then asked, “Are you saying that each nation of the world has its own god, the same as each nation has its own political leader?”

This man is an extremely fanatical Jew and does not trust anyone who does not agree with his radical views. What’s more, he is very jealous for his beliefs. He belongs to a sect whose motto is, “Whoever is not for us is against us, and whoever is against us we must fight.” It is written in Song of Solomon 8:6, “love is strong as death, jealousy is cruel as sheol.” Regardless of what I said to him, he replied, “That is not the truth.” Even when I gave him living proof from the Bible itself, he said, “You have no right to give explanations of the Scriptures because you are not a rabbi.” To that statement I replied, “It is written in Matthew 7:6, ‘Give not that which is holy unto the dogs, neither cast your pearls before swine.’ ” “From which book did you take that saying?” he asked. Instead of responding, I asked him a question: “Which do you read better, Yiddish or Hebrew?” “Hebrew,” he replied, and I said, “Good, because I have a  Hebrew Bible here, and you can read it for yourself.”

He was very interested in my Bible and looked at it carefully. He then asked, “How can  you  read such an unclean (non-Kosher) book? This contains the New Testament. How did this book even come into your possession?” I replied, “My friend, the New Testament is as much a part of the Bible as the Old Testament, and without the New Testament the Bible is incomplete.” He was now very disturbed and asked, “Who told you the New Testament is part of the Holy Bible?”   I answered, “Our own Jewish prophets wrote about Yeshua Ha-Mashiach – the Lord Jesus Christ.” My neighbor’s blood began to boil like water, and he cried out, “That is not true,” “Yes, it is true,” I told him. “The lie is your denial of the truth. The Bible describes people just like you when it says, ‘Hear ye indeed, but understand not; and see ye indeed, but  perceive not’ (Isa. 6:9; cp. Isa. 1:1–10; 53:1). Do you know from which book of the Bible that is taken?” “Yes, it is from the Prophet Isaiah,” he replied. “Tell me about the God spoken of by Isaiah,” I said. “Is He only for the Jewish people, as you said before?” I then read Isaiah 34:1, “Come near, ye nations, to hear; and hearken, ye peoples: let the earth hear, and all that is therein; the world, and all things that come forth from it.” I then said, “You can see from this passage that there is only one God, and He is for all the nations of the world. He has provided salvation, through His Son the Lord Jesus Christ, for the Jewish people as well as all the other people of the world. And He did this because He loves us; He loves all mankind. But, as it is written in Isaiah 1:3, ‘The ox knoweth his owner, and the ass, his master’s crib, but Israel doth not know; my people doth not consider.’ ”

He was very quiet for a while and then said, “I must leave now, but I will return and continue this conversation.” I assured him that he would be welcome in my home anytime.

Please pray with me that the Lord will cause this man to search the Scriptures and question the validity of his own beliefs. Pray also that I will have more open doors to witness to him about the God who shed His own blood for the sins of all the people of the world, Jewish and Gentile alike, and He will receive anyone who calls on Him in true faith. 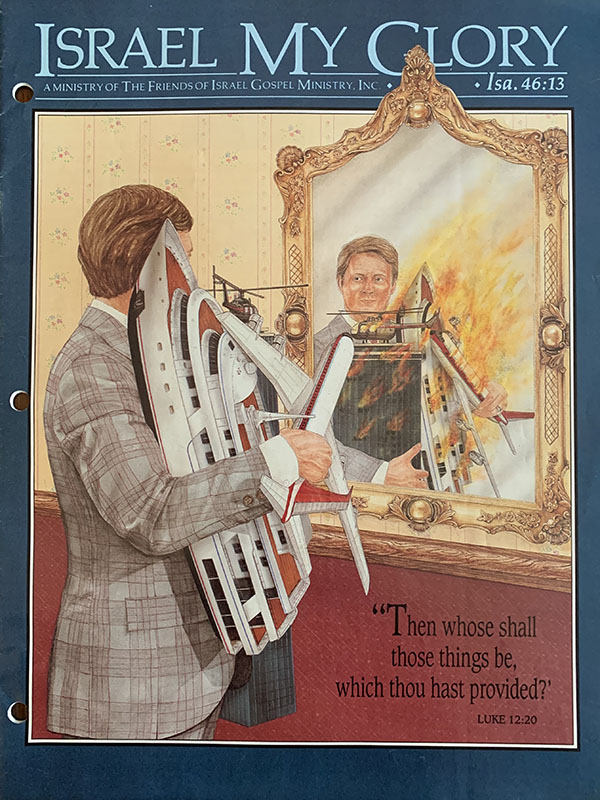