The Lord Jesus said, “when they bring you unto the synagogues, … be not anxious how or what thing ye shall answer, or what ye shall say; For the Holy Spirit shall teach you in the same hour what ye ought to say” (Lk. 12:11–12). I praise God that I have this truth to strengthen me as I witness for Him in the land of Israel.

I believe it is healthy to have a good laugh occasionally, and so it was on a pleasant Sabbath day recently. My son and his family had gone out for the day, and they left their small dog with my wife and me to pet-sit. Shortly after they left, I realized it was time to take the dog out for a walk, and it was just at the hour when people were returning home from the Sabbath prayer services at the synagogues. I live near a synagogue, and as I was walking the dog an orthodox family with many children approached me. The children were delighted to see the dog and started to play with him, and their father was happy to see them having such a good time.

I doubt that this man expected what happened next. As he watched his children frolicking on the ground around his feet, the little dog occupied himself by chewing on the tassels of the man’s prayer scarf. Of course, I did not notice what the dog was doing or I would have stopped him, but there is an old saying, When milk is spilled, you cannot bring it back to the pot. While I had a good laugh at the situation, the man was not amused, and his joy in watching his children quickly turned to dismay and anger. He looked at me with hatred in his eyes and said, “Look what has happened. From one side I made a great mitzvah [good deed] by allowing my children to enjoy themselves, but from the other side I have made a great sin by allowing your unclean dog to defile my beautiful long tassels. He ate my most holy possession. I kiss these tassels several times a day, and now they are no longer holy.”

I responded, “Your tassels were never holy, and they never will be. If you know the Jewish Scriptures, you should be aware that the tradition of having tassels on the prayer scarf is taken from Numbers 15:37–41 where the Lord commanded the Israelites to place fringes and a blue cord on the hems of their garments. They were to serve as a visual reminder of the Lord’s commandments to them, but God never said they were holy. Apparently you have never known the real significance of the tassels which you and many generations before you have placed over your eyes and kissed every day. There are many men who would never be separated from their tassels but who are sitting in prison today. There is certainly nothing holy about them. Furthermore, the Lord never meant for you to place the tassels over your eyes. Rather, He wants you to look at them as they hang on your garment and thereby remember what He expects of you.”

The man said, “Now you have gone too far. How do you know what the Lord expects of me?” I replied, “I know exactly what He expects of you. He wants you to keep His commandments. Also, as it is written in Joel 2:13, ‘tear your heart, and not your garments, and turn unto the Lᴏʀᴅ, your God.’ Your tassels are more important to you than your faith in the Lord, but you can see from this verse that your faith in Him is more important to God than your tassels. Tomorrow I will be happy to go with you to a store and purchase more tassels for your prayer scarf so that people can see how holy you are on the outside, but that will not affect the condition of your heart toward God.”

At that point he asked his wife to take the children and go home. This stiff-necked man had become extremely agitated and said, “As a Jew, you should know that it is our obligation to wear tassels on our garments as long as we live.” I replied, “Wearing tassels is not as important as receiving the Lord as your Savior. And this is not accomplished through practicing superstitions through which you believe you are keeping the commandments of the Lord. What is the point of keeping His commandments if you do not understand why you are doing it?”

This made him furious, but in time he became calm and eventually said, “Now I know with whom I should be spending time. It will be a great privilege for me to stop in and see you on my way home from the synagogue. Perhaps I will be able to bring a lost soul back to God.” I was not surprised at his statement, but I let him go on for a while. Then his attitude changed abruptly—he apparently recognized himself for who he was and sensed the irony in someone like himself trying to bring another person back to God. He told me he had come to Israel from New York, where he had been a drug addict. He admitted that he was ashamed of his past but said he had repented.

I then whispered a silent prayer and forged ahead as tactfully as possible. I said, “You thought you had repented when you began to dress in black clothes and wear side curls and a beard, but those outward signs will not help you. They are good on one day of the year only, Purim—carnival time! What you must do is open your heart before the Lord and ask for His forgiveness of your sins.” I thought this statement would make him so angry that he would walk away from me, but instead he asked in whom I placed my faith and how I had come to believe as I do. For the next hour I had the great privilege of telling this orthodox Jewish man how I had found Jesus, my Messiah and Savior. I could see that at times he was a little suspicious, but he was courteous. At the end of our long conversation we had a very friendly and gracious parting.

Who would have thought that a little dog could pave the way for such a serious discussion and an opportunity to explain to this man that faith in God is more important than the tassels he has held so dear through the years? This could only have been the work of the living God, and I am now praying that He will give me further opportunities with this man. Perhaps someday he will discard his beloved tassels and tear his heart, and not his garments. 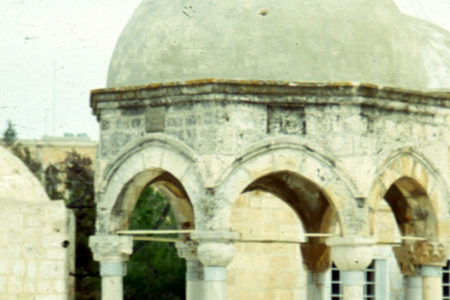