After David had become firmly established as king over the entire nation of Israel (2 Sam. 7:1), he expressed the desire to build a permanent house of worship for God in Jerusalem (2 Sam. 7:2-3). Through Nathan, the prophet, God revealed that it would be Solomon, David’s son, and not David himself who would build the house of worship (2 Sam. 7:47, 12-13). Although God did not allow David to build the Temple, He did establish a significant covenant with him. Because God made this covenant with David, theologians have called it the Davidic Covenant. This covenant has special significance concerning the future Kingdom of God foretold in the Bible.

In the Davidic Covenant God made promises concerning the nation Israel (vv. 10-11), Solomon (vv.12-15) and David (v.16). The promises of most concern to this study are the ones concerning David. God made three major promises with regard to David.

First, God made this promise; “thine house . . . shall be established forever before thee.” The term “house” referred to David’s physical line of descent. Thus, God was promising that David’s line of descent would endure forever. In line with this divine pledge, God declared the following in Psalm 89: “I have made a covenant with my chosen, I have sworn unto David, my servant: Thy seed will I establish forever” (vv. 3-4). Again He said: “His seed also will I make to endure forever” (v. 29), and “His seed shall endure forever” (v. 36). Even when David’s descendant, Jehoram, did evil as the king of Judah, “the Lord would not destroy the house of David, because of the covenant that he had made with David” (2 Chr. 21:7).

Because of this guarantee of the Davidic Covenant, Jews who lived centuries after David’s kingdom had ceased to function clung to the hope of that kingdom’s restoration. Thus, when Jesus made His triumphal entry into Jerusalem on Palm Sunday, throngs of Jews cried out: “Blessed be the kingdom of our father, David, that cometh in the name of the Lord” (Mk. 11:10), and, when Jesus was ready to ascend to Heaven, His disciples asked if He would restore the kingdom again at that time (Acts 1:6).

The third Davidic Covenant promise concerning David was this: “thy throne shall be established forever.” Other statements concerning David’s throne (2 Sam. 3:10; 1 Ki. 1:37, 47) lead to the conclusion that this is a reference to the ruling authority which David exercised as king. Thus, God was pledging that the ruling authority which David exercised would never pass away permanently, even though it might not be exercised at all times. Once again it is a fact of history that David’s ruling authority has not been exercised at all times since God made this solemn promise, but this divine pledge was a guarantee that David’s ruling authority would always have the potential of being restored to full exercise. To put it another way, it was a guarantee that a royal descendant of David would always be available to exercise that authority when circumstances would so permit. That this is so is indicated by God’s statement to Solomon: “. . . I have covenanted with David, thy father, saying, There shall not fail thee a man to be ruler in Israel” (2 Chr. 7:18). God also declared that He had sworn to build up David’s throne “to all generations” (Ps. 89:3-4).

Because of this guarantee of the Davidic Covenant, several centuries after David’s ruling authority stopped being exercised, the angel, Gabriel, could declare the following concerning David’s descendant, Jesus: “. . . the Lord God shall give unto him the throne of his father, David. And he shall reign over the house of Jacob forever” (Lk. 1:32-33). The very fact that Gabriel could make such a promise clearly indicates that, even though David’s ruling authority had been inactive for several centuries, it had not passed away permanently.

It should be noted that God stated no conditions in the content of the Davidic Covenant when He established it with David. This indicates that the Davidic Covenant is unconditional in nature. It depends totally upon the faithfulness of God for the fulfillment of its promises.

The Major Issues Of The Davidic Covenant

The angel, Gabriel, announced that God would give Jesus the throne of His ancestor, David, that Jesus would reign over the house of Jacob forever and that Jesus’ kingdom would never end (Lk. 1:31-33).

Peter declared that God had sworn with an oath to David “that of the fruit of his loins, according to the flesh, he would raise up Christ to sit on his throne” (Acts 2:30).

Isaiah prophesied the following concerning Messiah: “Of the increase of his government and peace there shall be no end, upon the throne of David, and upon his kingdom, to order it, and to establish it with justice and with righteousness from henceforth even forever” (Isa. 9:7).

By contrast some Amillennialists believe that Christ fulfills these promises now (during this age before His second coming) in His present rule over the Church or human hearts as He sits at God’s right hand on the throne of God in Heaven. According to this view, then, the kingdom over which Christ rules in fulfillment of the Davidic Covenant is solely a spiritual kingdom. It is not a literal, earthly, political kingdom. In addition, in order to be consistent, this view must equate the throne of David with the throne of God in Heaven.

Other Amillennialists believe that Christ will fulfill these promises in eternity future after the present earth has been destroyed and history concluded in conjunction with His second coming. According to this view the future Kingdom of God which is foretold in the Bible and over which Christ is to rule will not be present at any time during the present earth’s existence.

The Distinctiveness Of The Throne Of David

Contrary to one of the Amillennial views, the throne of David cannot be equated with the throne of God in Heaven. Several biblical factors make such an equation incorrect. First, it is a fact of history that several descendants of David have sat upon his throne, but only one descendant of David ever sits on the right hand of God’s throne in Heaven. That descendant is Jesus (Ps. 110:1; Heb. 8:1; 12:2; 1 Pet 3:22).

Fourth, in Revelation 3:21 Jesus drew a clear distinction between His throne and the throne of God in Heaven where Jesus presently sits with His Father. Jesus said: “To him that overcometh will I grant to sit with me in my throne, even as I also overcame, and am set down with my Father in his throne.” Since it is the throne of David which God has promised to give to Jesus (Lk. 1:31-32), it would appear that David’s throne is Jesus’ throne. Since Jesus drew a distinction between His throne and God’s throne in Heaven, then David’s throne and God’s throne must not be the same.

Fifth, God’s declaration to His Son, “Thy throne, O God, is forever and ever” (Ps. 45:6-7; Heb. 1:8), seems to indicate that God also recognizes Jesus throne to be distinct from God’s throne in Heaven.

Sixth, it is a fact of history that David’s throne was on the earth, not in Heaven. David and his descendants who sat on his throne exercised an earthly ruling authority. Never did they exercise ruling authority in or from Heaven. By contrast the Bible indicates that God’s throne is in Heaven. In fact, it declares that Heaven is God’s throne. Isaiah 66:1 states, “Thus saith the Lord: The heaven is my throne, and the earth is my footstool” (cf. Ps. 103:19; Mt. 5:34; 23:22; Acts 7:49).

Further biblical factors concerning when and how these promises in the Davidic Covenant are to be fulfilled in Jesus Christ will be examined in the next article. 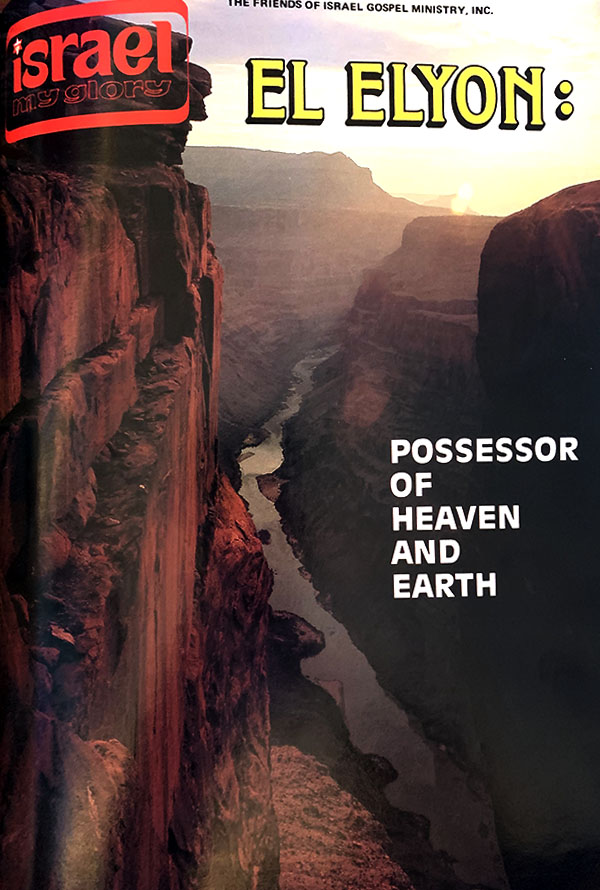