The Essentials of Dispensationalism

What makes a dispensationalist? Dr. Charles Ryrie, former president of Philadelphia Biblical University, professor emeritus at Dallas Theological Seminary, and author of more than 30 books, answers this question in a newly revised edition of his unparalleled classic, Dispensationalism, published by Moody Publishers, © 1995, 2007 by Charles C. Ryrie.

This outstanding work is available through The Friends of Israel. The following excerpt is used by permission.

What marks off a person as a dispensationalist? What is the sine qua non (the absolutely indispensable part) of the system? The answer is threefold.

Progressive dispensationalists seem to be blurring this distinction by saying that the concept is not in the same class as what is conveyed by the concepts of Gentiles, Israel, and Jews. What this means is not completely clear. However, it does seem to imply that the classic Israel/church distinction is less clear.

3. A third aspect of the sine qua non of Dispensationalism concerns the underlying purpose of God in the world. The covenant theologian, in practice, believes this purpose to be salvation (although covenant theologians strongly emphasize the glory of God in their theology), and the dispensationalist says the purpose is broader than that; namely, the glory of God. Progressives have a Christological center, apparently to undergird their emphasis on the Davidic covenant and on Christ as the already reigning Davidic ruler in heaven.

To the normative dispensationalist, the soteriological, or saving, program of God is not the only program but one of the means God is using in the total pro-gram of glorifying Himself. Scripture is not man-centered as though salvation were the main theme, but it is God-centered because His glory is the center. The Bible itself clearly teaches that salvation, important and wonderful as it is, is not an end in itself but is rather a means to the end of glorifying God (Eph. 1:6, 12, 14). John F. Walvoord, [Lewis Sperry] Chafer’s successor at Dallas Theological Seminary, puts it this way: “The larger purpose of God is the manifestation of His own glory. To this end each dispensation, each successive revelation of God’s plan for the ages, His dealing with the non-elect as with the elect…combine to manifest divine glory.”4 In another place he says:

All the events of the created world are designed to manifest the glory of God. The error of covenant theologians is that they combine all the many facets of divine purpose in the one objective of the fulfillment of the covenant of grace. From a logical standpoint, this is the reductive error—the use of one aspect of the whole as the determining element.5

The essence of Dispensationalism, then, is the distinction between Israel and the church. This grows out of the dispensationalist’s consistent employment of normal or plain or historical-grammatical interpretation, and it reflects an understanding of the basic purpose of God in all His dealings with mankind as that of glorifying Himself through salvation and other purposes as well. 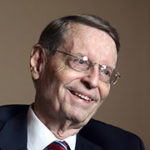 Forty years ago in June, Israel recaptured its city of cities in a six-day war that stunned the world. But things haven’t turned out as anticipated.

The Roots of Replacement Theology

What in the world happened to make Christians believe they are the “new Israel”? The answer does not flatter the early church.

A Look at the Big Picture

Satan is at war with God. And if you can understand this war, you’ll understand the entire drama of human history.

How Anti-Semitism Corrupted the Church

Anti-Semitism is one of Satan’s biggest tools. Unfortunately, the church has not been immune to his handiwork.

For the Glory of God

You don’t need to be a theologian to understand Dispensationalism. You only need to grasp some of the important points explained here.