The Holiness of God

The Meaning Of The Holiness Of God

The root term for the word “holy” means to divide.1  A holy person, then, is one who is divided from other persons and things — divided in the sense of being marked off, set apart or separated from others. One should not conclude, however, that in order to be holy, a person must divide from the presence of others by dropping out of society and becoming a recluse or hermit. Historically that wrong conclusion led to the development of the monastic movement. That conclusion is not the thrust of the biblical concept of holiness. The biblical concept is as follows: To be holy is to be divided from others in the sense of being different or distinct from them. Sometimes it can go so far as to carry the sense of being unique.

This distinction between “holy” and “profane” appears several times in the Bible. Three examples will be sufficient to demonstrate the distinction. First, in Ezekiel 22:26 God rebuked the priests of Israel for having profaned His holy things (the things which He wanted to be different or distinct they converted into common, ordinary things) and for making no difference between the holy and profane.

Second, while Israel was under the Mosaic Law God declared the Sabbath day to be holy (Ex. 31:14-15). This meant that God intended the seventh day of the week to be different, distinct or unique from the other six while that Law was in effect. On the other six days the people of Israel were to work. That was the common, the ordinary. But on the Sabbath day they were to rest. Thus, that day was to be different.

Third, the Bible calls itself “the holy scriptures” (literally, the holy writings) [Rom. 1:2; 2 Tim. 3:15].3  The idea behind this designation is as follows: The Bible is different, distinct or unique from all other writings produced during the course of history. All other writings were not inspired (breathed out) by God, but the Bible was (2 Tim. 3:16). Thus, the Bible is unique, in a class of its own.

Since to be holy is to be different, distinct or unique from the common or ordinary, whenever the Scriptures declare that God is holy, they mean that God is different, distinct or unique from everyone and everything else. Several examples from the Bible will demonstrate this to be so. When Moses and the people of Israel sang a great song of praise to God after He had delivered them safely across the Red Sea, they said: “Who is like unto thee, O Lord, among the gods? Who is like thee, glorious in holiness. . . ?” (Ex. 15:11). They associated God’s holiness with the fact that He is different, distinct or unique from all the other gods which man has worshipped. The word which is translated “glorious” literally means expanded.4  Thus, the Israelites were declaring that God’s uniqueness is far greater than that of anyone else. No one else is as distinctive or unique as He.

Hannah, Samuel’s mother, declared the following concerning God: “There is none holy like the Lord; for there is none beside thee, neither is there any rock like our God” (1 Sam. 2:2). Once again God’s holiness was equated with the idea of uniqueness. Hannah was asserting that God is one of a kind.

In the midst of an amazing passage (Isa. 40:12-31) which emphasizes the unparalleled greatness of God, God asked the following question: “To whom, then, will ye liken me, or shall I be equal? saith the Holy One” (v. 25). In this instance God himself indicated that His holiness is synonymous with His uniqueness. No one else matches Him.

In Hosea 11:9 God declared: “. . . I am God, and not man, the Holy One in the midst of thee. . . .” Through this statement God was emphasizing the fact that His holiness involves His being different or distinct from man.

In light of all that has been seen thus far, a conclusion can be drawn concerning the meaning of the holiness of God. The holiness of God is that which divides Him from everyone and everything else. It is the quality of God being different, distinct, unique — one of a kind.

The Basic Attribute Of God

Since the holiness of God is His uniqueness, that which makes Him distinctive from all others, it can be concluded that holiness is the basic, foundational attribute of God. Apart from His holiness, God would not be God.

At least two things indicate that holiness is the basic attribute of God. First, other attributes of God contribute to His holiness. For example, God is omnipresent (everywhere present), omniscient (knows everything), omnipotent (all powerful), infinite (no limitations), self-existent (not dependent on anyone or anything else for His existence) and eternal (no beginning or end). Only God possesses these attributes; no one else does; therefore, these attributes contribute to His uniqueness.

Second, the four angels which surround God’s throne in Heaven incessantly (day and night) cry out: “Holy, holy, holy, Lord God Almighty,. . .” (Rev. 4:8). It should be noted that these angels continuously assert the holiness of God. They do not incessantly emphasize His other attributes in the same manner. The fact that these angels continuously emphasize the uniqueness of God rather than His other attributes as they surround His special presence in Heaven seems to indicate that God’s uniqueness means more to Him than any other attribute which He possesses. His holiness is absolutely essential to His being who He is.

Graphic Manifestations Of The Holiness Of God

The Scriptures record several graphic displays of God’s holiness. For example, when Sennacherib, king of Assyria, sent his great army to Jerusalem during the reign of King Hezekiah, his spokesman, Rabshakeh, issued a warning from the king of Assyria to the people of Jerusalem. In that warning Sennacherib asserted that, just as the gods of other nations had not been able to deliver those nations from his strong hand, so Jehovah would not be able to rescue Jerusalem from his military might (2 Ki. 18:28-35; 19:10-13). This was Sennacherib’s way of saying that Jehovah, the God of Israel, was no different from the gods of other nations. In other words, his assertion was a slur upon the uniqueness or holiness of God.

When King Hezekiah received Sennacherib’s warning, he considered it to be a reproach against God (2 Ki. 19:3-4, 16). Hezekiah recognized that Sennacherib’s statement was an attack upon Gods uniqueness; therefore, he said: “. . . thou art the God, even thou alone, of all the kingdoms of the earth; . . .” (v. 15), and he asked God to save Jerusalem from Sennacherib so “. . . that all the kingdoms of the earth may know that thou art the Lord God, even thou only” (v. 19).

God responded to Sennacherib’s warning by declaring that He would deal with him in judgment and would defend and save Jerusalem from his hand (2 Ki. 19:6-7, 20-34). God addressed Sennacherib as follows: “Whom hast thou reproached and blasphemed? And against whom hast thou exalted thy voice, and lifted up thine eyes on high? Even against the Holy One of Israel” (v. 22). God thereby issued a return warning to Sennacherib. This Assyrian king was about to learn that his slur upon God’s uniqueness was wrong. Sennacherib had declared that Jehovah was no different from any other god, that He would be just as impotent against Assyria’s might as they had been. God, however, would demonstrate to this arrogant, loudmouthed Gentile that Israel’s God was different or unique.

As the Holy One of Israel, God demonstrated His difference from the gods of all the other nations by supernaturally killing 185,000 Assyrian soldiers in one night’s time (2 Ki. 19:35). This broke the back of Sennacherib’s mighty army. As a result, Sennacherib retreated home and afterward was assassinated (2 Ki. 19:36-37).

A second graphic manifestation of God’s holiness is recorded in Isaiah 6:1-4. Isaiah received a vision of God seated upon His throne. Seraphim (angels of high rank) stood above God’s throne. They cried out the following to each other: “Holy, holy, holy, is the Lord of hosts; the whole earth is full of his glory” (v. 3). Here again is a picture of exalted beings emphasizing the uniqueness of God.

It is significant to note the location of these seraphim as they declared God’s uniqueness. They were standing above God’s throne. Originally that position was occupied by another great angel, Lucifer (Isa.14:12), the anointed cherub who covered God’s throne (Ezek. 28:14, 16). However, through time Lucifer became overwhelmed with pride because of his exalted nature (Ezek. 28:15,17). He boasted that he would “be like the Most High” (Isa. 14:14). Lucifer thereby attacked the uniqueness of God, for in essence he was saying: God, You are not unique, one of a kind, I can become just like You.

God responded to this reproach against His holiness by casting Lucifer out of His Heaven (Isa. 14:12; Ezek. 28:16). Apparently God replaced him with the seraphim whom Isaiah saw above His throne. It is interesting to note that the term “seraphim” means burning ones. In contrast with Lucifer, who attacked God’s holiness, these angels burned with zeal for His holiness. Thus, as they stood above God’s throne, they emphasized His uniqueness.

As Isaiah observed this vision of God with its great emphasis upon His holiness, he was overwhelmed by a sense of sinfulness for himself and his people (Isa. 6:5). Apparently one particular aspect of God’s holiness impressed Isaiah on this occasion — that is, the difference between God and man in relationship to sin. Man is sinful, but God is absolutely sinless (1 Jn. 1:5-10).

The Scriptures foretell another great manifestation of the holiness of God for the future. Since the early part of the twentieth century the Marxist government of Russia has been blatantly atheistic. Its consistent, official position has been that God does not exist and that the capitalists invented the idea of God in order to hold the workers in subjection. This position is another assault upon the holiness of God, for in essence it is saying that there is no personal being so unique, so different, so distinct from the material universe as to be recognized as God.

Once again God will respond to this reproach against His holiness. Approximately 2,500 years ago He declared that in the latter years and days of the earth’s history (Ezek. 38:8,16) He will put hooks into the jaws of the leader of Russia (v. 4) to pull him, the Russian army and the armies of allied nations (vv. 4-6) into the land of Israel (38:16-17; 39:2). Russia and its allies will respond to this pulling by invading the tiny nation of Israel with a military force so large that it will be like a cloud covering the land (38:8-9, 14-16).

The Russian leader will have his own reason for invading Israel (38:10-13); however, God clearly indicated that He will be the ultimate instigator of this future invasion. He will prompt it for His own sovereign purpose — to glorify Himself both before Israel and the Gentiles by demonstrating the fact that Jehovah, the God of Israel, is the Holy One (Ezek. 39:7; cf. 38:16, 23; 39:6, 21-22).

The way in which God will demonstrate His holiness through this future invasion of Israel is as follows: He will destroy the large military force of Russia and its allies while it is in Israel (Ezek. 39:1-22). God will do it supernaturally (38:18-22) and thereby make it obvious that there is indeed a personal being so unique, so different, so distinct from the material universe that He should be recognized as God — that being is Jehovah, the God who has been associated with the nation of Israel historically (38:23; 39:7).

To be continued in the next issue. 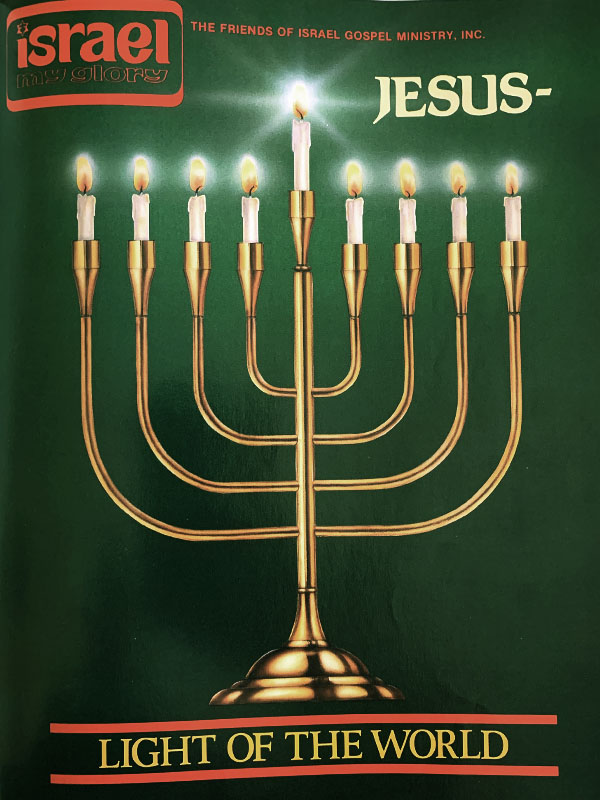