The Holiness Of Places Where God Is Uniquely Present

The idea behind these declarations is: Because God is present in a unique sense at each of these places, they are different, distinct or unique from other places. Other places are common or ordinary in contrast with them. For example, the land of Israel and the city of Jerusalem are holy because, out of all the lands and cities on earth, God specifically chose to dwell in them in a unique sense.

The Holiness Of Things Owned By God

The idea behind these declarations is: Because God owns these persons and things, they are different, distinct or unique from other persons and things. Other persons and things are common or ordinary in contrast with them. For example, God’s prophets and apostles were holy because, out of all the messengers in the world, God specifically set them apart to be his spokesmen to declare His unique message.

The Scriptures present at least three applications of the holiness of God to His people. First, they command God’s people to “worship the LORD in the beauty of holiness” (1 Chr. 16:29; Ps. 29:2; 96:9). The word which is translated “beauty” means ornament or adornment.1 Since holiness is the quality of being different, distinct or unique, then to worship the LORD in the beauty of holiness means to adorn or decorate God with the fact that He is different, distinct or unique. Thus, the way in which God’s people are to fulfill this command of the Bible is: In private devotions and in public worship, they are to declare how God is different, distinct or unique from everyone and everything else. Although the passages in which this command was given were addressed specifically to God’s people of Israel in Old Testament times, certainly the command is applicable to God’s people today, for the fact of God’s holiness has not changed.

When the Bible declares that believers are holy, it is referring to the fact that they have been given a different, distinct or unique position by God. The idea which is related to this holy position is: Since the time of man’s fall away from God, all human beings (except Jesus Christ) have been born into the world in a lost, sinful, unsaved condition with membership in Satan’s kingdom (Ps. 51:5; Rom. 3:9-23; Eph. 2:1-3; Jn. 8:44; 1 Jn. 3:10). Since this is true of all human beings, this is what is common or ordinary. However, when a person trusts Jesus Christ, the Son of God, to be his personal Savior from sin, God divides him spiritually from the realm of the unsaved and places him in the realm of the saved; God separates him from membership in Satan’s kingdom and gives him a position in His family and kingdom (Eph. 2; 5:8; Col. 1:13; 1 Pet. 2:9-10). In other words, God gives the believer a position which is different, distinct or unique from the common, ordinary position of the unsaved. This makes the believer part of a unique minority in the world (1 Pet. 2:11).

The basis for the believer’s holy position is twofold: He is indwelt by God and owned by God. Earlier it was noted that places where God is uniquely present are holy and everything which God owns is holy. When a person trusts Jesus Christ to be His Savior, the Holy Spirit takes up permanent residence within that person’s body. This means that deity is uniquely present inside the believer. Because this is so, the Apostle Paul wrote the following to believers: “What? Know ye not that your body is the temple of the Holy Spirit who is in you, whom ye have of God,. . .” (1 Cor. 6:19). In addition, Paul taught that believers are owned by God, for he said: “Know ye not that. . . ye are not your own? For ye are bought with a price. . .” (1 Cor. 6:19-20). God owns believers, for He purchased them with the price of His Son’s shed blood (Acts 20:28; 1 Pet. l:18-l9; Rev. 5:9). Since believers are indwelt by God and owned by God, they are holy.

The third application of the holiness of God to His people is: The Scriptures command believers to be holy. At first, this command may appear to be contradictory of the second application which has just been observed. If it be true that believers are holy, then why does the Bible command them to be holy? The answer is found in the following fact: The second and third applications are dealing with two different aspects of the relationship of believers to God’s holiness. The statement that believers are holy refers to the position which believers receive from God once for all at the moment they trust Christ as Savior. By contrast, the command for believers to be holy is directed to their value system, character, lifestyle and practice. In essence, this command is requiring believers to bring their value system, character, lifestyle and practice into conformity with their holy position (Eph. 4:1). In other words, since God has given believers a position which is different, distinct or unique from the common, ordinary position of the unsaved, then the believers’ value system, character, lifestyle and practice are to be different, distinct or unique from those of the unsaved. Believers are not to be conformed to the ungodly ways of the satanic world system in which they live (Rom. 12:2; Jas. 4:4; 1 Jn. 2:15-17; 5:19).

That this is the idea which is involved in the command for believers to be holy is evident from several passages. In 1 Peter 1:14-16 the Apostle Peter wrote the following to believers: “As obedient children, not fashioning yourselves according to the former lusts in your ignorance But, as he who hath called you is holy, so be ye holy in all manner of conversation [life]; Because it is written, Be ye holy; for I am holy.” The term “conversation” means way of life, conduct, behavior.3 Thus, Peter commanded believers to be different in their lifestyle, conduct or behavior from that which was characteristic of their unsaved days. The reason that Peter gave for their being different was this: The Father who had called them to a position in His family is holy.

Peter also reminded believers that Jesus Christ paid a terrible price (the shedding of His precious blood) in order to redeem them from the useless way of life which they inherited from their godless ancestors (vv. 18-19). The fact that Christ paid such a high price in order to effect such a redemption strongly implies He wants His redeemed ones to pursue a radically different way of life from that of the unsaved.

In light of this teaching concerning their holy position, Peter exhorted believers to abstain from fleshly lusts while having good conduct among the unsaved Gentiles (vv. 11-12; cf. Rom. 13:12-14). Once again Peter was indicating that the way of life or conduct of the believer should conform to his holy position.

In 2 Corinthians 7:1 the Apostle Paul exhorted believers in the following manner: “Having, therefore, these promises, dearly beloved, let us cleanse ourselves from all filthiness of the flesh and spirit, perfecting holiness in the fear of God.” Paul was beseeching believers to cleanse themselves outwardly from impure deeds of the body and inwardly from defiling attitudes and thoughts. In other words, he was exhorting them to have a holy way of life, holy values and holy conduct.

Paul based this exhortation upon promises which God has made to His people. God has promised to dwell and walk in the midst of believers, to be identified with believers as their God and to have them identified with Him as His people and to exist in a Father-child family relationship with them (2 Cor. 6:16-18). All of these promises imply that God has placed believers in a unique position or relationship with Himself.

Paul indicated that, while believers would be cleansing themselves from defiling deeds, attitudes and thoughts, they would thereby be perfecting holiness in their lives. The term “perfect” means complete.4 The idea which Paul was communicating was this: When God gives the believer his unique position in the family and Kingdom of God at the new birth, He intends that once-for-all gift to be the starting point of a process in the believer’s life.The goal of that process is the conforming of the believer’s value system, character, lifestyle and practice to his holy position. The more the believer cleanses himself from defiling deeds, attitudes and thoughts, the more the God-intended process of holiness is completed in his life. Thus, Paul was indicating that the believer’s way of life or conduct should conform to his holy position.

In light of the teaching of these passages and the meaning of the term “holy,” the following conclusion can be drawn: The biblical command for believers to be holy requires God’s people to be different, distinct or unique from the unsaved in their value system, character, lifestyle and practice. The believer is to be different from the unsaved in his philosophy of life. He is not to adopt the self-centered philosophy of the world which says that “I am number one. I exist for my own benefit. Everyone and everything else are here to serve me” (Jas. 3:13-16; 4:1-3). Instead, he is to follow the biblical philosophy which says; “God is number one; therefore I do not exist for my benefit. The whole purpose of my life is to glorify God and to serve others” (1 Cor. 10;31; Mt 20:20-21, 24-28; Jn, 13:4-5, 12-17; Phil. 2:3-9).

God is looking for believers who dare to be different, who purpose in their hearts not to defile themselves with the godless things of the unsaved world (Dan.1:8), who refuse to expose themselves to what is contrary to God’s holy nature and their holy position. 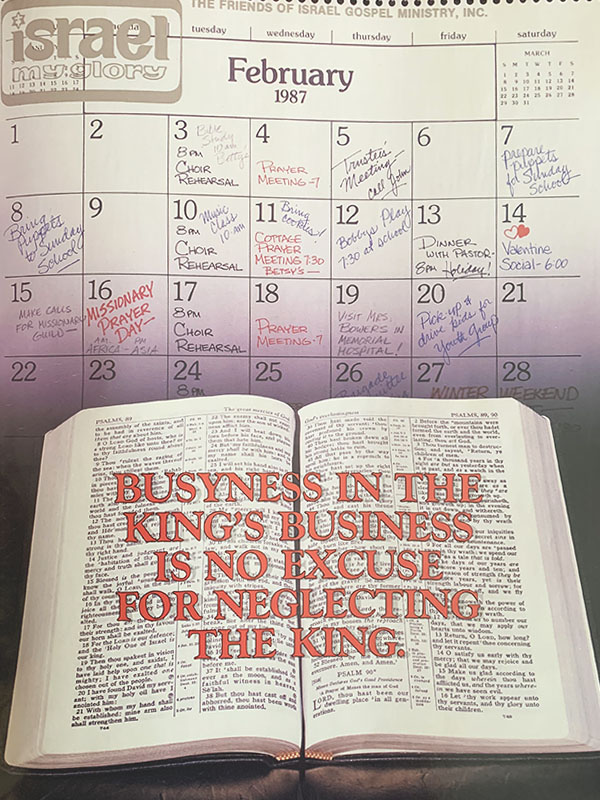