The Regathering of Israel

One of the most debated questions of our day is whether or not present-day Israel is the Israel of the Bible. Menachem Begin, when he was Prime Minister of Israel, ran his government on the premise that God has a special purpose for Israel in this day and time. Yet there are many who say that the Israel of today has nothing to do with the Israel prophesied to be on the scene when end-time events occur. Is present-day Israel the nation spoken of in the prophecies of end-time events? The answer to this question is fundamentally bound up in Israel’s history and God’s special dealings with her.

God gave to Abraham three unconditional promises in Genesis 12:1–3. In verse 1 there is the promise of a national blessing—a national land divinely deeded. In verse 2 individual blessing is promised. This, literally, is the promise of numerous descendants. It also points to a day when those descendants will be held in high esteem and be the source of great blessing. In verse 3 is the third promise of universal blessing—redemption, both for Israel and, through her, to all the world. But because of her great sin, the fulfillment of this covenant was postponed.

Moses, in prophesying Israel’s future rebellion, also spoke of her future reestablishment in the land in accordance with the Abrahamic Covenant (Dt. 30:56). This is precisely the same statement made by Jeremiah (Jer. 31:31–33) and known as the New Covenant. Note that the covenant to be replaced is not the Abrahamic Covenant but the Mosaic Covenant (v. 32). Thus, there is a day yet future when God will fulfill completely the covenant He made with Abraham.

The First Dispersion and Regathering

The Bible clearly teaches two distinct dispersions and two subsequent regatherings of the nation of Israel. The first dispersion was prophesied in Deuteronomy 28:36–37 and occurred in two phases. The first phase took place about 721 B.C., when the northern kingdom (Israel) was carried away into Assyria (cp. 2 Ki. 17:6). The second phase began around 608 B.C. when Judah, the southern kingdom, was carried captive into Babylon (cp. 2 Ki. 24:11–16; 25:8–11). Jeremiah-prophesied that the latter dispersion would last 70 years (Jer. 25:11). There was a partial return during the time of Ezra and Nehemiah, around 538 B.C.

The Second Dispersion and Regathering

The second dispersion was prophesied in Deuteronomy 28:25, 63–67. Note that this second dispersion was not into a single nation but “into all the kingdoms of the earth” (v. 25) and “among all people, from the one end of the earth even unto the other” (v. 64). Thus, this was to be a worldwide dispersion, and it was fulfilled in 70 A.D. when Israel rebelled against Rome. Under Titus, Jerusalem and the Temple were destroyed by the Roman army, and the Jews were driven from the land. This dispersion was completed in 135 A.D. under the Roman Emperor Hadrian, and the Jews were scattered worldwide.

The second regathering is prophesied in Deuteronomy 30:1–6 and Isaiah 41:8–20. Again, notice the phrases “among all the nations” (Dt. 30:1) and “Abraham … whom I have taken from the ends of the earth” (Isa. 41:8–9). This is clearly a worldwide regathering for ultimate millennial blessing! Therefore, the second regathering must immediately precede the Messiah’s Second Coming.

What, then, of present-day Israel? To answer that question, consider these facts. Scripture is clear that Israel’s final reestablishment in the land will occur in close connection with the Second Coming of the Messiah. It is further evident that the Messiah’s Second Coming is tied to the second regathering of Israel into her land (Isa. 11:10–12). Note the time of the Messiah’s Second Coming: when “the Lord shall set his hand again the second time to recover the remnant of his people” (v. 11). Note further from whence He shall gather them: “from the four corners of the earth” (v. 12).

It is further evident that, although in unbelief (Ezek. 37:8), Israel will be reestablished as a nation before the beginning of Daniel’s 70th week (Isa. 28:15–18, 22). Isaiah states that Israel will make “a covenant with death, and with sheol” (v. 15). Clearly this is the covenant made with the Antichrist at the beginning of the Tribulation period (cp. Dan. 9:27).

The next great event for Israel is the coming of “the time of Jacob’s trouble” (Jer. 30:7). The next great event for the Church is the Rapture. “Wherefore, beloved, seeing that ye look for such things, be diligent that ye may be found of him in peace, without spot, and blameless” (2 Pet. 3:14). “Pray for the peace of Jerusalem; they shall prosper who love thee” (Ps. 122:6). 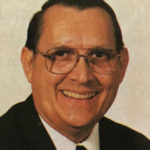 Kenneth Symes is the former Florida State Director for The Friends of Israel.

3 thoughts on “The Regathering of Israel”

The face of our world is changing at an incredible rate. Armies moved through the Middle East packing a military punch never before witnessed on the face of the planet.

Israel During the Messianic Kingdom Zephaniah 3:9–20

Just one short year ago, hope ran high that the decade of the 1990s would usher in world peace. The buzz words of the day were “Peace in our time.”...

The Regathering of Israel

One of the most debated questions of our day is whether or not present-day Israel is the Israel of the Bible. Menachem Begin, when he was Prime Minister of Israel, ran his government...

An Evaluation of Christian Reconstructionism

Christian Reconstructionism (the teaching of which has been examined in survey fashion in two previous articles) has some commendable features. For example, it has done excellent work in evaluating the devastating effects of secular humanism...

In Deuteronomy 20:1 it is written, “be not afraid ... for the Lᴏʀᴅ thy God is with thee.” Here in Israel, we are living in the light of this promise day by day...