The Restoration of Israel Part Two

A number of years ago the late David Ben-Gurion, first Prime Minister of Israel, received a letter from Dr. William Culbertson of Moody Bible Institute. After thanking Mr. Ben-Gurion for meeting with him during his stay in Israel, Dr. Culbertson wrote these words:

Our visit to Israel was very wonderful. I continue to marvel at the initiative, the industry and the utter devotion of the people to the work of rebuilding Israel. It is a source of inspiration indeed. Some of us, of course, believe that this could well be the prelude to what the Old Testament prophets predicted. You manifested such a complete grasp of the religious side of the matter that I am sure you know some of us do believe in a personal Messiah and that there are days of great glory awaiting your nation.*

David Ben-Gurion isn’t the only one in history who had to be told of the glorious future awaiting the Jewish people. The predominately Gentile church at Rome also lacked understanding of God’s plan to save and restore Israel to a place of privileged blessing. Their ignorance, however, led to an attitude of superiority over the unbelieving Jewish people. Therefore, after instructing the church on the principle of restoration (11:16–22) and the possibility of restoration (11:23–24), Paul informed them of the promise of Israel’s restoration.

The purpose of the apostle’s instruction was to correct the arrogant attitude of Gentiles who looked down on Israel’s spiritual blindness. Focusing on the Jewish people’s blindness, Paul’s teaching answered four key questions concerning Israel’s coming restoration:

Paul wrote, “For I would not, brethren, that ye should be ignorant of this mystery, lest ye should be wise in your own conceits: that blindness in part is happened to Israel, until the fullness of the Gentiles be come in” (v. 25). To deliver the predominately Gentile church at Rome from self-exaltation, Paul informed them that Israel’s blindness will come to an end. He called this a “mystery.” In the Bible, a mystery does not refer to something which is difficult to understand, uncanny, or mysterious. A biblical mystery is a, truth that previously has been hidden in the mind of God but now is revealed by Him for the first time (cf. Eph. 3:1–5). In essence, it is newly revealed information.

What was this new information God revealed in connection with Israel’s hardness toward Him? It certainly did not refer to the fact that Israel was partially hardened. It was a well-known biblical truth that only a remnant of Jewish people in each generation would believe in the Lord. The Hebrew Scriptures clearly reveal that the majority of Israel has historically been in rebellion toward God (cf. 1 Ki. 19:18 and Isa. 1). The point of Romans 9 was to establish the principle that God has always worked through an elect minority in His dealings with the Jewish nation.

While it was well-known that blindness in part had happened to Israel, it was not known how long that blindness would last. This was the mystery that had been hidden in the heart of God. He had chosen not to reveal the length of Israel’s condition of blindness until He made it known through Paul in Romans 11:25. Paul taught that the nation would remain blinded to the truth of the gospel “until the fullness of the Gentiles be come in.” In other words, Israel will be blind until the last Gentile in the Church age has been brought to Christ.

The “fullness of the Gentiles” describes this present age during which God is saving many Gentiles. In Acts 15:14 James said, “Symeon hath declared how God first did visit the nations [Gentiles], to take out of them a people for his name.” While individual Jews are being saved today (the remnant), this is primarily a time when God is visiting the Gentiles. The nation of Israel will remain hardened to the gospel until the Church is raptured at the close of this age. Then, during the seven-year Tribulation period, God will again focus His program on Israel in order to bring her to Himself and to restore her to a place of blessing.

Having established the fact that Israel’s blindness will end when the Church age ends, Paul then revealed that the Lord Jesus Christ, at His return, will put an end to Israel’s blindness. He wrote, “And so all Israel shall be saved; as it is written, There shall come out of Zion the Deliverer, and shall turn away ungodliness from Jacob” (vs. 26).

During the Tribulation period, Satan will attempt to destroy Israel (Rev. 12). Zechariah 13:8 announced that two-thirds of the Jewish population will die during this time. The horrors of the Tribulation will include Satanic persecution, natural catastrophes, and unprecedented demonic activity. Jeremiah referred to this day as “the time of Jacob’s trouble” (Jer. 30:7). Jesus declared that the Great Tribulation would be a time of unparalleled devastation. He said, “For then shall be great tribulation, such as was not since the beginning of the world to this time, no, nor ever shall be” (Mt. 24:21).

While the Jewish population during the Tribulation period will be dramatically reduced, God will protect and preserve a remnant. The Prophet Zechariah declared that the remaining one-third of the Jewish people will go through a period of intense suffering that will result in the nation turning to the Lord. He wrote, “And I will bring the third part through the fire, and will refine them as silver is refined, and will test them as gold is tested; they shall call on my name, and I will hear them. I will say, It is my people; and they shall say, The Lᴏʀᴅ is my God” (Zech. 13:9).

The surviving remnant of Jewish people alive at the end of the Tribulation will constitute the entire nation of Israel. Therefore, Paul referred to both the remnant and the nation when he wrote, “And so all Israel shall be saved.” This certainly doesn’t mean that every Jew who has ever lived will be saved, but all the Jews alive when Christ returns will be saved.

During the Tribulation period, the nation of Israel will acknowledge and accept Jesus as Messiah. After the unbelieving Jewish rebels have been purged out (Ezek. 20:33–38), Christ will remove the blindness of Israel, and the nation will finally recognize their Messiah. While the coming of the Messiah in great glory and power was a common Old Testament theme, it was Zechariah who described Israel’s future repentance when Messiah comes. He wrote, “And I will pour upon the house of David, and upon the inhabitants of Jerusalem, the Spirit of grace and of supplications; and they shall look upon me whom they have pierced, and they shall mourn for him, as one mourneth for his only son, and shall be in bitterness for him, as one that is in bitterness for his firstborn” (Zech. 12:10).

The arrogant Gentile church at Rome needed to understand that Israel’s blindness will someday be removed. But why will Christ “turn away ungodliness from Jacob”? Why will the Lord bring Israel to Himself? The answer is given in verse 27, “For this is my covenant unto them, when I shall take away their sins.” The apostle quoted from Isaiah 59:21 which associates the coming of Messiah with the New Covenant. The Prophet Jeremiah foretold that the New Covenant which God would make with Israel would provide the forgiveness of their sins (Jer. 31:31–34). The reason Christ will lift Israel’s blindness is to fulfill His Word to bring Israel under the New Covenant.

Paul went full circle with the argument that began in Romans 9:6. The concern over God’s integrity in keeping His promise of salvation to Israel had been dealt with. At the return of Christ, all Israel will be saved. God remains true to His Word to forgive the sins of repentant Israel. Paul vindicated God’s name. He brilliantly defended the righteousness of God in His dealings with Israel. But one more issue remained to be settled by the apostle. If God had planned all along to remove Israel’s blindness, what was the purpose of waiting until the return of Messiah to do it?

Having already explained God’s purposes in allowing Israel to stumble (Rom. 11:11–15), the apostle summed up his point in verse 28. He wrote, “As concerning the gospel they are enemies for your sakes; but as touching the election, they are beloved for the fathers’ sakes.” Let the proud Gentile church understand that God has withheld the gospel from Israel in order to offer it to Gentiles. However, Israel remains the elect nation, beloved by God because of His promises made to Abraham, Isaac, and Jacob. Today Israel is an enemy of the gospel, but in the future restoration God will treat them as friends.

When the Lord promised the Jewish patriarchs that He would make them a blessed nation, His promise was irrevocable. He who called Israel into existence, bestowed upon them numerous gifts, and promised the nation future glory will fulfill His Word. God’s purposes for Israel will be accomplished in spite of her present blindness. How can we be so certain of this? “For the gifts and calling of God are without repentance” (v. 29).

Jewish blindness to the gospel should never be a cause for self-exaltation by Gentiles. Israel’s unbelief has resulted in scores of Gentiles hearing the gospel. Instead of responding in pride, the Gentile church should be humbled by the mercy God has shown to them.

The next article will examine God’s mercy to both Jews and Gentiles. 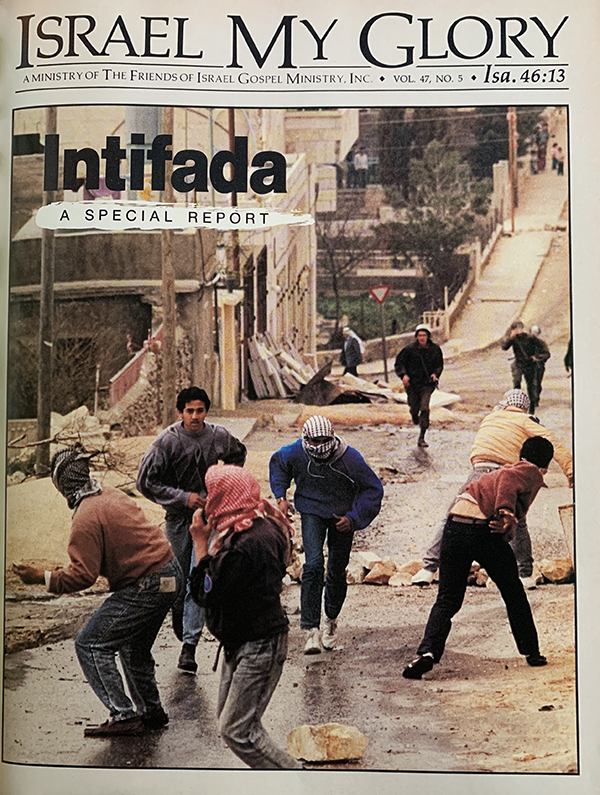