The Sons of Noah

The ark had been parked. The deluge was passed, and it was now time for Noah and his family to enter into the post­ diluvian brave new world that awaited them. Noah’s first act after debarkation was to build an altar and offer sacrifices to the Lord. This act elicited God’s promise that He would not smite every living thing again as He had done (Gen. 8:20-22).

The provisions of the Noahic Covenant regard­ing the spread of life, the sustenance of life, the source of life and the sanctity of life then follow in Genesis 9:1-7. God pledged His faithfulness to these promises by the token of a “bow in the cloud” (Gen. 9:12-17). As a warrior or hunter places his bow on the wall after its use, the Lord put His bow in the sky after He shot it on the earth with the flood. He now promised that He would not perform that same act again!

Noah’s three sons – Shem, Ham and Japheth  – become the progenitors of new life on the earth  that had been wrecked by the flood but also purified from its ungodly inhabitants (cf. Gen. 6:7). Genesis 9:18 also records a tiny piece of information that is important in understanding the rest  of the account: “and Ham is the father of Canaan.”

The following verses record a sad event in the life of Noah, the man of whom it was previously said, “Noah was a just man and perfect in his generations, and Noah walked with God” (Gen. 6:9). These verses describe the fall of a good man. “And Noah began to be a farmer; and he planted a vineyard. And he drank of the wine, and became drunk; and he was uncovered within his tent” (Gen. 9:20-21). Scripture records both the victories and the defeats of God’s people. That fact is an evidence of the Bible’s truthfulness, since human authors would tend to play down the faults of their “heroes.”

Only one who has been personally touched by the evil of drunkenness can fully appreciate the shame that results from overindulgence. “Wine is a mocker, strong drink is raging, and whosoever is deceived thereby is not wise” (Prov. 20:1). In this instance, the fairest flower that humanity had thus far yielded, suddenly wilted. However, Noah’s disgrace was only increased by his younger son’s subsequent action. “And Ham, the father of Canaan, saw the nakedness of his father, and told his two brethren outside” (Gen. 9:22). The exact nature of Ham’s deed has caused much discussion among commentators. An accidental glance at his father’s nakedness would not seem to merit the harsh judgment on a group of Ham’s descendants that later follows.

Leviticus 18 may provide help in this regard. That chapter warns the Israelites against some of the abominable sexual practices of the Canaanites. The particular sexual sin condemned is that of unlawful relations between near relatives (i.e., incest). The phrase that is used to describe the act is “to uncover one’s nakedness” (Lev. 18:6-18).

Therefore, there are many who see Ham’s sin as sexual abuse of Noah while his father was in a drunken stupor. Then Ham went out and declared (Hebrew word nagad) the fact to his brothers in a boastful and arrogant spirit.

Ham’s brothers, however, did not share his disgraceful glee. “And Shem and Japheth took a  garment, and laid it upon both their shoulders, and went backward, and covered the nakedness of their father; and their faces were backward, and they saw not their father’s nakedness” (Gen. 9:23). Shem and Japheth continued to honor their father (see Ex. 20:12), even when he was in a state of dishonor. Their approach was characterized by sensitivity and not sensuality.

“And Noah awoke from his wine, and knew what his younger son had done unto him” (Gen. 9:24). When his head cleared and Noah realized what had happened, he uttered what one writer has termed “the most far-reaching prophecy in all the Bible.”

Genesis 9:25-27 records a series of simple yet profound prophetic utterances consisting of one curse and two blessings. These prophecies extend far beyond Noah’s immediate offspring to the yet unborn generations that would issue from his sons. In effect, the future history of the human race is found in its broadest outlines in these amazing verses. Let us consider them separately.

By divine in­spiration, Noah uttered his first prophecy about Canaan and his descendants:

“And he said, Cursed be Canaan; a servant of servants shall he be unto his brethren”  (Gen.  9:25). The observant reader at this point will ask an obvious question: If Ham committed the act, why is his son Canaan cursed? This important question is not answered in the immediate context. No reason is stated why a son of Ham is cursed and not Ham himself. Perhaps the reason is that as Noah was dishonored by one of his sons, so Ham will be dishonored by one of his sons. Or, perhaps Noah prophetically saw that Canaan and his descendants would reproduce the sensuous character of their father Ham more than his other descendants. Biblical history and archaeology do inform us that the Canaanites proved to be an ungodly and sensuous group (see Gen.15:16; Lev.18). Or, perhaps, since Genesis 9:1 states that God had already blessed Noah and his sons (including Ham), it would be impossible for Ham himself to then be cursed (see Num 23:20). Whatever the reason God through Noah prophetically cursed Canaan, it is important to notice that not all of Ham’s descendants were placed under a curse of servitude and bondage (the phrase “servant of servants” describes the most severe slavery imaginable!). From Genesis 10:6 we learn that Ham had three other sons: Cush, Mizraim and Put. In Genesis 10:7-14 their sons are listed, and we do know where they settled. Cush refers to Ethiopia; Mizraim refers to Egypt; and Put refers to North Africa/Libya. Thus, three of Ham’s sons and their descendants settled Africa. Their brother Canaan’s descendants, however, did not settle in Africa, but in the land to which they gave their father’s name  –  the land of Canaan! It was this land that God later promised to Abraham, a descendant of Shem (Gen.12:5-7; 15:18-21). Later, Joshua conquered this land and placed Canaanites under forced slave labor (Josh. 9:23). Even later, Solomon followed the same practice by enslaving the surviving Canaanites in his day (1 Ki. 9:20-21). Thus, the prophetic curse of slavery was literally fulfilled on the Canaanites.The mistaken idea that Ham’s African descendants are cursed is a myth too often sadly perpetuated even to this day!

“And he said, Blessed be the LORD God of Shem; and Canaan shall be his servant” (Gen. 9:26). Leaving the prophetic curse, Noah began to issue two “blessings” – a spiritual blessing on Shem and a temporal blessing on Japheth. Actually, it was not Shem himself who was blessed, but He who would be the God of Shem (i.e., the LORD). Our English versions indicate by the four capital letters of LORD that the word used for God’s name is the sacred personal name sometimes translated “Jehovah,” but probably more accurately pronounced “Yahweh.” It is God’s covenant name, indicating His eternal existence and His personal relationship to His covenant people. It is this LORD (i.e., Yahweh) who would be the God of Shem and his descendants. The Shemites became the great Middle Eastern peoples, including those later called Arabs and Jews. What this prophecy indicates, therefore, is that God would establish a personal covenant relationship with the line of Shem. The family descendants of Shem are listed in the “Table of Nations” in Genesis 10:21-31. What is most important to notice, however, is that from Genesis 11:10 through The Revelation the biblical account deals exclusively with Shem’s descendants. Genesis 11:27 introduces us to Abraham, a “Shemite,” and it is with this man that God made a special covenant that formed the basis for all of His later dealings in salvation history.

“God shall enlarge Japheth, and he shall dwell in the tents of Shem; and Canaan shall be his servant” (Gen. 9:27). The last of Noah’s prophecies concerns Japheth and his descendants. According to Genesis 10:2-5 Japheth’s sons included Gomer, Magog, Javan and Meshech  –  names  familiar to biblical readers as describing those tribes which settled in areas that would later be called Europe and Russia. “By these were the borders of the nations divided in their lands; every one after his tongue, after their families, in their nations” (Gen. 10:5). Anthropologists would refer to Japheth’s descendants as the Indo-European  peoples. What was their prophetic blessing? According to Genesis 9:27, they would be “enlarged.” This must refer to territorial and temporal enlargement – exactly  what  took  place in the later history of the Indo-European peoples and their culture. Who can doubt that much of the world’s exploration as well as creative culture appeared among Japheth’s descendants?

But it is not the temporal blessing of territory and influence that exhausts the promise to Japheth. Note the second line of Noah’s prophecy, “and he shall dwell in the tents of Shem” (Gen. 9:27b). The phrase, “dwell in the tents, ” does not mean a military conquest, but must be understood in its Middle Eastern context. To dwell in someone’s tent means to share in the belongings of your host who owns the tent (cf. Ps. 84:10). This image was brought home to the author in a graphic way when I visited with a Palestinian Bedouin in his tent in the spring of 1980. His hospitality (for which the Bedouin are famous) knew no limits as he invited me to share what he owned. I settled only for a cup of Bedouin coffee, the strength of which practically grew new hair on a bald head! But I learned firsthand the meaning of this phrase as I “dwelt in his tent.”

According to Genesis 9:27, someday the Gentile peoples will dwell in the tents of the Shemites. In other words, they will partake of Shem’s unique privilege – a special relationship to the one true God.

For thousands of years, men wondered and speculated on how this prophecy would find its fulfillment. Not until the appearance of Shem’s greatest Son did the prophecy begin to take shape. Jesus indicated that His work would be extended beyond the realms of the Jewish people by His declaration in John 10:16, “And other sheep I have, that are not of this fold; them also I must bring, and they shall hear my voice; and there shall be one fold, and one shepherd.” It was not until after His resurrection, ascension and granting of the Holy Spirit to the young church that the tent door was finally opened to Japheth. Even then, those early Jewish believers were hesitant to go to the supposedly “unclean” Gentiles. Finally, God showed Peter that the Gentiles were to be granted the same truth as the Jews had received. And so, the Japhethite Cornelius came to dwell by faith in the tents of Shem (see the account in Acts 10).

How marvelous and wonderful is the plan of God for the redemption of mankind!
Whatever be their ethnic or racial ancestry, the peoples of this world can find their salvation in that descendant of Shem who brings life, peace and hope to all who trust Him as Savior.
He who is the Messiah of Israel is also the Savior of the world! 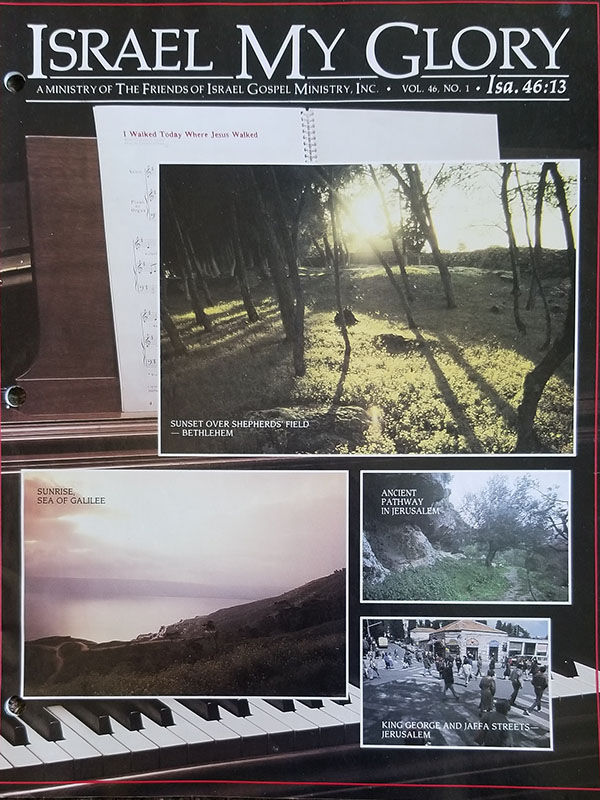