All we like sheep have gone astray; we have turned every one to his own way.  Isa. 53:6

One of the questions I am often asked is, “Why did the Jewish people of Christ’s day reject Him?” Many Christians are puzzled over the fact that, while Israel knew the Old Testament messianic prophecies, witnessed the miracles of Jesus, and heard the testimony of gospel witnesses, the nation still did not embrace Jesus as Messiah and King. Instead, they despised Him and refused to have Him reign over them. One of the saddest verses in the Bible states, “He came unto his own, and his own received him not” (Jn. 1:11).

The subject of Israel’s rejection of Christ forms the message of the closing section of Romans chapter 9 and all of chapter 10. After stating that God has fulfilled His Word to Israel through an elect remnant (Rom. 9:6-29), the Apostle Paul went on to explain why the majority of Israelites were lost. Their rejection of Christ had nothing to do with sovereign election, but rather with their own unbelief. The doctrine of election only explains why a remnant of Jewish people believe in Christ. It doesn’t answer the question, Why do most Jewish people not believe in Christ? Therefore as Paul brought Romans 9 to a close, he shifted his attention from divine election to human responsibility. The focus of Romans 9:30 to 10:1 is on Israel’s unbelief. In this section of Scripture, Paul gave three truths about his people’s unbelief:

The Reality of Israel’s Unbelief

The vast majority of Gentiles in Paul’s day were not interested in righteousness. Their lifestyles were often immoral. Their large cities were centers of idolatry, sexual perversion and superstition. In other letters, Paul said that Gentiles were characterized by lustful passions (1 Th. 4:5), futility of mind, ignorance, hardness of heart, callousness, sensuality and greediness (Eph. 4:17-19). These first-century pagans were certainly not in pursuit of righteousness, yet when they heard the gospel of Christ, many of them received it.

In city after city around the Roman Empire, Paul found many Gentiles open to Christ, while most of his Jewish kinsmen were closed. For instance, at Pisidian Antioch the Jewish community instigated a persecution against Paul and his companion Barnabas, yet a number of Gentiles rejoiced and believed the Word of God (Acts 13:44-52). At Thessalonica, after some Gentiles were persuaded to believe in Christ, many Jewish people were jealous and started a riot (Acts 17:1-9). Throughout Paul’s ministry the pattern remained the same: Gentiles who once were not interested in righteousness were open to the gospel’s offer of righteousness, and Jews who spent their lives trying to attain to a level of acceptable righteousness before God were closed to the gospel.

Jewish people, regardless of their religious zeal, are lost apart from faith in Christ. When I was a new believer in the Lord, I struggled over this very issue. My grandfather was an Orthodox Jewish man with a deep belief in the existence of God. All of his life was spent observing religious rituals and practices. Yet according to Romans chapter 9, while he pursued a law of righteousness, he did not arrive at that law. That is to say that even though he worked at being good enough to get into Heaven, he never made it.

It is important for Bible-believing people to understand that Jewish people, as well as Gentiles, are not saved unless they trust Jesus Christ as their Savior. It is a popular ploy of television talk show hosts to put evangelical guests on the spot by asking them, “Will Jews go to Hell because they don’t believe in Christ?” The answer is that both Jewish people and Gentile people will spend eternity in Hell unless they trust Christ as Savior. The Apostle Peter boldly declared to a group of first-century Jewish leaders, “Neither is there salvation in any other; for there is no other name under heaven given among men, whereby we must be saved” (Acts 4:12).

The Jewish people of Christ’s day had religious fervor. Many in Israel, like Nicodemus (Jn. 3), wanted to be righteous enough to enter into the Kingdom of God. However, when Jesus the Messiah presented Himself as God’s provision for their need of righteousness, they violently rejected Him. What was the reason for their hostility?

The Reason for Israel’s Unbelief

Paul declared, “Why? Because they sought it not by faith but, as it were, by the works of the law. For they stumbled at that stumbling stone” (Rom. 9:32). The typical Jewish person sought righteousness by doing good works, rather than by God’s way of faith. He insisted on trying to earn his way to Heaven by obeying the Mosaic Law, and it was this determination that caused him to trip over Christ and the simplicity of the gospel of grace. He did not think he needed a Savior from sin because he was too good for that.

This self-righteous attitude still prevails among most Jewish people (as well as most Gentiles) today. They see themselves as upright, responsible citizens whose good deeds will earn them favor with God. They are insulted when told that they are sinners. They fail to see that the essence of sin is a violation of God’s holiness. It begins with an attitude of independence towards God’s right to rule over their lives and manifests itself in actions of disobedience to God’s Word. This is why the Prophet Isaiah declared, “All we like sheep have gone astray; we have turned every one to his own way” (Isa. 53:6). Like the ancient Jewish sheep of Isaiah’s day, modem Jews continue to live independent of the Shepherd of Israel.

Instead of leaning on Christ and the righteousness He provides through His death, Israel stumbled over Him. Their pride caused them to insist on earning salvation, rather than receiving it by faith in the crucified Messiah. What makes this even more tragic is that their Hebrew Scriptures (Isa. 8:14; 28:16) foretold this stumbling stone. Paul wrote, “As it is written, Behold, I lay in Zion a stumbling stone and rock of offense; and whosoever believeth on him shall not be ashamed” (Rom. 9:33). In spite of all that Paul wrote about election, the reason Israel continues in their lost state is because they refuse to trust Christ for their salvation. Unlike repentant Gentiles who acknowledge their wickedness and humbly admit their need for righteousness, Israel’s pride blinds them to their spiritual need. With heads held high, they fail to notice the Rock God has placed in their path, and consequently they stumble over Him.

The Response to Israel’s Unbelief

If Jewish pride is responsible for Israel’s unbelief, then what should be our attitude towards them? Should we ignore and neglect them in our missionary endeavors? Should we write them off as having had their opportunity to believe? The only acceptable response to Jewish unbelief is revealed in Paul’s attitude towards Israel. He wrote, “Brethren, my heart’s desire and prayer to God for Israel is, that they might be saved” (Rom. 10:1). To Paul, the salvation of Israel was a burden. In spite of israel’s rebelliousness towards Christ, the apostle yearned for his people’s salvation. Paul’s interest in Israel’s salvation was more than a professional theologian’s concern but rather the heartfelt desire of a compassionate man.

This inner desire manifested itself in concrete praying for the salvation of Israel. Unlike some modern-day believers, Paul never allowed the truth of sovereign election to destroy his prayer life. He never reasoned, Why bother to pray? lf God saves whoever He chooses to save; then how can my prayers be of any consequence? Paul did not see the inconsistency between prayer and the doctrine of sovereign election. Rather than a deterrent to prayer, divine sovereignty is really an incentive to ask God to save people, for only a sovereign God is powerful enough to overcome the hardness of men’s hearts in bringing them to salvation.

Sovereign election does not exclude praying for Jewish people to be saved. We need to keep in mind that God not only chooses the elect remnant, but He also chooses the means by which they will come to faith in the Lord – through the Word of God and prayer. At the end of Paul’s life, while anticipating execution, he said to Timothy, “For which I suffer trouble, as an evildoer, even unto bonds; but the word of God is not bound. Therefore, I endure all things for the elect’s sake, that they may also obtain the salvation which is in Christ Jesus with eternal glory” (2 Tim. 2:9-10). To motivate Timothy to endure hardness, Paul used his own suffering for the cause of Christ as an example. The reason he continued preaching the gospel, even at the cost of his life, was because it is through an understanding of God’s Word that the elect come to faith in Christ. Paul declared the significance of the Word of God in bringing the elect to salvation when he said, “So, then, faith cometh by hearing, and hearing by the word of God” (Rom. 10:17).

The Word of God is not the only means by which God has chosen to save the elect. In conjunction with the use of His Word, He burdens people to pray for the salvation of the lost. A number of years ago, while my mother was dying of lung cancer, the Lord burdened many people at the church I pastor to pray for her salvation. I am convinced that God placed this burden on their hearts as His method of bringing one of His elect to salvation because five hours before she passed away she placed her trust in Jesus as her Messiah and Savior.

How should we respond to Israel’s unbelief? We should desire their salvation, pray for their salvation and lovingly tell them about the Messiah who offers them salvation through faith and not works. In the remainder of Romans 10, we will see how Paul expands on Israel’s pursuit of salvation by works and their responsibility in rejecting the gospel of grace based on faith. 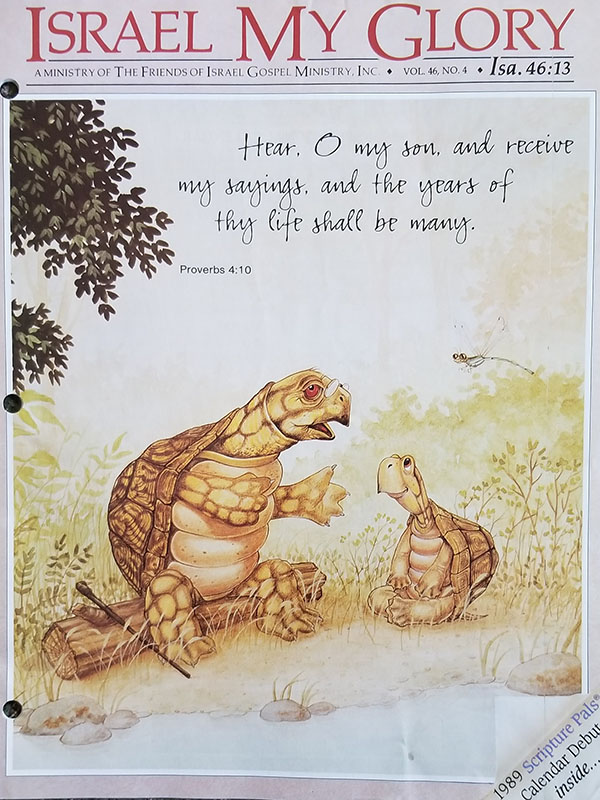