Where are Israel’s Friends Found?

“These simple Christian hearts are much better than our Jewish clerics who think of their wedding fees . . . .”

Many will be surprised to learn that the statement above was made by no less a luminary figure than Theodore Herzl, the father of Zionism and torchbearer for the establishment of the modern State of Israel. In referring fondly to “simple Christians”, Dr. Herzl was speaking of believers who firmly stood by the promises of the Scriptures, which flatly declared that Israel would one day live again as a national entity in the Middle East. For Herzl, 1901 was a year of personal crisis, when the majority of his own people were adamant in their refusal to accept his fervent commitment to a massive Jewish return to Palestine. Like the brethren of another era, their ‘Babylons’ offered too many comforts for them to follow this bearded ‘Ezra’ into the uncertainties of their ancestral home. Two world wars and a devastating Holocaust would shatter European Jewry’s delusions and prove Theodore Herzl’s wisdom.

This was a time when Herzl and his handful of sympathizers desperately needed the strength, comfort and example of Christians who believed the Book and were willing to stand and be counted as friends of Jewry – and stand they did. It was only a ‘Gideon’s band’, but as one studies the period, he becomes convinced that God was employing a number of hand-picked men and women of faith to join in the march toward the historic fulfillment of Jewry’s persistent dream, “Next year in Jerusalem!”

Dr. Herzl, a journalist by profession, would find his Christian emissary in the person of a man named William Hechler. Hechler was an Anglican clergyman, the son of missionaries and chaplain of the British embassy in Vienna, Austria. The chaplain held to a strong belief in the personal return of Christ, which, he believed, would be preceded by a physical return of the Jewish people to Palestine. He welcomed Herzl’s pamphlet, Der Judenstaat (The Jewish State), and enthusiastically sought out the man he felt might well be an instrument in the hand of God to guide Jews back to their homeland. Their meeting and subsequent relationship would span the remaining years of Herzl’s life. It was William Hechler who taught the father of Zionism the biblical prophecies of Jewry’s return to Zion. The preacher traveled tirelessly across the face of Europe arranging meetings with royalty, influential politicians and clergymen. When Herzl traveled to Palestine, Hechler was along on the journey talking of the land and the Messiah’s return to Jerusalem.

The full extent of the minister’s influence on Zionism’s premier figure has only recently come to light. He was, without question, a primary source of counsel, encouragement and aid during the conceptual stage of Israel’s rebirth. Herzl, himself, said of his Bible-believing friend, “He counsels me superbly, and with unmistakably good will. So far, with respect to myself, he has backed me up in quite a wonderful way . . . I would wish the Jews to show him a full measure of gratitude.” Hechler would be one of the last people to visit Theodore Herzl before his death.

As the impetus for the resurrection of the State of Israel gathered momentum, other Gentiles with confidence in the promises of God began to make themselves heard. England’s famous Balfour Declaration, the document expressing the British government’s official acceptance of the idea of a national homeland for the Jewish people in Palestine, is named for Arthur James Balfour, who served as prime minister and later, foreign secretary. According to his biographer, Blanche Dugdale, he was influenced in his opinions about Jewish statehood by his Scottish ancestry and consequent association with the Old Testament Scriptures.

The Balfour Declaration was approved under the leadership of Prime Minister David Lloyd George, who strongly supported the return on biblical grounds. “I was taught more about the history of the Jews than about the history of my own people,” he would affirm. As a result, the prime minister of England believed Jews and Israel had a divinely appointed destiny to fulfill.

Jan Christian Smuts was a member of Britain’s Imperial War Cabinet during World War I, prime minister of South Africa, and one who helped formulate the Balfour Declaration. Jan Smuts, according to Jewish commentators, “showed a deep understanding and love for the Bible.” He did indeed. As a matter of fact, Mr. Smuts was steeped in the Scriptures and believed they clearly set forth the concept and necessity of a Jewish national home.

At about the same time, William E. Blackstone was preaching the same message on the other side of the Atlantic. Blackstone, a Chicago businessman-turned-evangelist and missionary, is described in the Encyclopedia Judaica as a man whose “views sprang from his millennarian theology as expressed in his first book, Jesus is Coming (1878) . . . . He considered the Jewish restoration to Zion as the fulfillment of biblical prophecies signifying the approach of the second advent of Jesus.” Blackstone circulated petitions which demanded the intervention of America in favor of the return of Jews to the land of Israel. He was successful in securing the signatures of hundreds of prominent Americans. His petitions were believed to be a significant factor in President Woodrow Wilson’s positive attitude toward the Balfour Declaration.

When the statehood of Israel became a reality in 1948, the infant nation was forced to fight for her life. Many of the young Haganah and Palmach soldiers who participated in that struggle would owe a debt of gratitude to another righteous Gentile, Charles Orde Wingate. This British Army officer, like Hechler, was the son of missionary parents. He served in Palestine from 1936 until 1939. Wingate is remembered by Jews for his love of the Bible and the fact that it was his constant companion. During his tenure in Palestine, he played a leading role in opposing the Arab terror campaign and training the Haganah in night combat to counter and prevent Arab attacks. A Jewish writer singles him out as one who “. . . left a lasting impression on the country, and some of the young Jews whom he had befriended and trained were to become military leaders in the State of Israel.” The soldier-saint was so attached to the land and the People of the Book that, after forbidden by his own government to return to Israel, he lamented in a letter to a friend in Palestine, “If I forget thee, O Jerusalem . . . .” Wingate Square in Jerusalem and three other sites in Israel are named in honor of the Christian soldier.

These are only a few; there were others. I have come across their names and those of the organizations they served while doing research in the Zionist Archives in Jerusalem. England had her Restoration Movement with hundreds of evangelical Christians working on behalf of a Jewish return to Israel. Names of Puritans; Protestants; individuals, like John Nelson Darby; the Moody Bible Institute and numbers of others dot the records compiled by Jewish historians. It is not rare to find statements such as “Christian Zionism had a long prehistory, deeply rooted in theological thought and messianic expectations. Many Protestant, Fundamentalist churches adopted this outlook and continue to promote it to this day.”

Today Israel and the Jewish people are attempting to identify their true friends. These sought-for friends will be found just where they have always been, within the boundaries of the biblical haven that knows no political, prejudicial or religious barriers. Israel’s firmest friends are found among Christian believers who are bound, without apology, to a love and allegiance to the divine plan for God’s Chosen People. Theodore Herzl paid tribute to one of these “simple Christians” by saying, “The man is a Christian Zionist.” Here he stressed the oneness of those, Jew and Gentile, who believe in the inherent right of the Jewish people to live in peace in the land given to them by divine decree.

A few weeks ago, I spent the evening in the home of a gentleman who is one of Israel’s most prominent personalities and scholars. We were talking about Israel’s link with the Bible when he said, “Elwood, there is no explanation for modern Israel apart from the Bible. We cannot exist without this Book. Everything here is a result of what the prophecies say will become a reality.” In these words my host identified the bond that forges an inseparable union between Israel’s people and believing Christianity – the Bible and the integrity of God’s revealed Word.

There is little doubt in my mind that we now face the prospect of a time when those who believe the Word of God will be called upon to demonstrate in concrete ways where Israel’s friends are to be found. Bible believers can show the reality of their faith in Christ through their actions. This is the basic ingredient in an effective witness for our Messiah. We have seen the names of some Christians who were willing to prove their love for Israel and the Jewish people. Only eternity will reveal how many Jews embraced the Messiah because they were first embraced by the loyalty and love of those who really cared – for Christ’s sake.

“THE MEASURE OF GOD’S LOVE IS THAT HE LOVES WITHOUT MEASURE.” 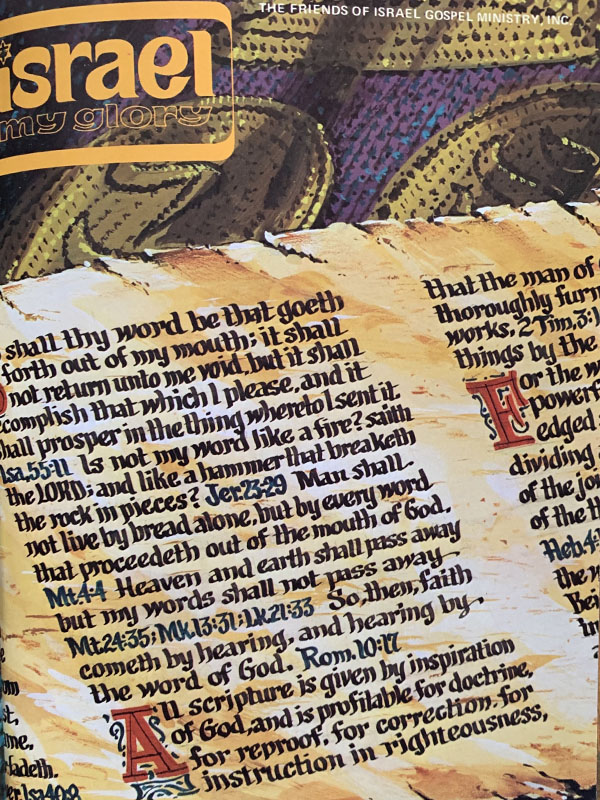