Occasionally a package leaves the shipping department of The Friends of Israel carrying this printed message: One of two. It is the Mission’s way of saying, You have not received everything yet — another package is still to come.

When the second package is sent out, these printed words are enclosed: Two of two. And that means, You’ve got it all — there is no more to come.

One day God sent a package to earth — a very special gift. It was deity wrapped in the package of humanity. Jesus was Immanuel — God with us. But His glory was veiled within His flesh, and in humility and lamb-like silence He came to taste death for every man. God’s package, how­ ever, contained this message: One of two. For as wondrous as Christ’s first advent was, God has promised a second advent — another package. When it arrives, it will carry this thought: Two of two. And by so doing, it will signify,  You’ve got it all — there’s no more to come —there is nothing that can be added. For Jesus will return again,  this time wrapped in glory to rule and reign with perfect wisdom and omnipotent power.

Although the second package has not yet arrived, its coming is certain. It’s a matter of divine timing. But God has been pleased to give some previews of coming attractions — that is, to reveal what it will be like when the second package arrives. But hear the inspired penman:

. . . the government shall be upon his shoulder; and his name shall be called Wonderful, Counselor, The Mighty God, The Everlasting Father, The Prince of Peace (Isa. 9:6).

FOR UNTO US A CHILD IS BORN
HERE IS PERFECT HUMANITY. God had promised a sign to identify the righteous One when He appeared on the stage of human history (Isa. 7:14). Biblical “signs” were normally mirac­ulous and supernatural. They were given to confirm or authenticate some crucial truth. The sign to identify the appearance of the Son of God among men was this, “. . . the virgin shall conceive,and bear a son.. ,” (Isa. 7:14). Since this individual experienced birth — since He came from the womb of a woman — it could truly be said a child was born. However, since no man was involved in the conception process,  the sin nature (which is passed to all of mankind through natural procreation of man and woman) was not passed to Jesus at birth. This was a holy conception — the result of an obedient Jewish maiden by the name of Miriam (her proper name) and the Holy Spirit who, in the words of Doctor Luke, would come upon her, and the power of the Highest which would overshadow her (Lk 1:35).

The result of that holy conception was a holy child. Here was perfect humanity — man as he had been and would have continued to be if sin, as an operating principle, had not entered the loins of man in the Garden.

But Jesus was infinitely more than perfect hu­manity.

UNTO US A SON IS GIVEN
HERE IS UNDIMINISHED DEITY — a child is born, because Jesus experienced physical birth; a son is given, because Jesus existed before His physical birth. He was the preexistent Son of God. Concerning this latter statement, the prophet wrote, “But thou, Bethlehem Ephrathah, though thou be little among the thousands of Judah, yet out of thee shall he [Jesus] come forth unto me that is to be ruler in Israel, whose goings forth have been from of old, from everlasting” (Mic. 5:2). And Jesus himself, in response to question­ing by the Jewish leadership, declared,”. .. Before Abraham was, I am” (Jn. 8:58), thereby acknowl­edging His preexistence.

Isaiah the prophet wrote of this union in these words: “.. . the virgin shall conceive, and bear a son [humanity], and shall call his name Imman­uel — God with us (deity) [Isa. 7:14].

Little Jesus, meek and mild, is also the One who spoke the universe into existence — fashioned man from the dust of the earth — and breathed into him the breath of life.

AND THE GOVERNMENT SHALL BE UPON HIS SHOULDER
HERE IS INHERENT ROYALTY. “The government shall be upon his shoulder” — that’s a quaint way of saying, He’s going to rule. The hymnwriter is right. “Jesus shall reign where’er the sun does his successive journeys run,His kingdom spread from shore to shore till moons shall wax and wane no more.” Longfellow put it this way in his beautiful Christmas poem, “Then pealed the bells more loud and deep: God is not dead: nor doth He sleep; the wrong shall fail, the right prevail, with peace on earth, goodwill to men. ” That will happen when world government rests upon the shoulder of Jesus during His thousand-year reign.

Now here is amazing truth to contemplate and place confidence in. Please don’t miss it. Within the framework of one verse of Scripture, and with only a comma between, the first and second comings of the Lord are clearly outlined. A child born, a son given occurred at His first coming more than nineteen hundred years ago in a little, obscure, insignificant village called Bethlehem. “And the government shall be upon his shoul­der.. “ awaits His second coming to the rebuilt Temple when He ascends the throne of David at Jerusalem.

AND HIS NAME SHALL BE CALLED….
HERE IS UNIQUE IDENTITY. Biblical names were given to underscore a major characteristic or achievement of the individual who bore the name. The Son of God came to be a Savior — that was to be the major achievement at His first coming. So the angelic messenger commanded Joseph to “. . . call his name Jesus [meaning Savior]; for he shall save his people from their sins” (Mt 1:21).

At the Lord’s second coming His major achieve­ment will be to reign and bring history to its divinely intended consummation. A series of names is given to the Son of God to reveal attributes which He possesses and the character of His reign during His second coming.

These names set Him apart from and infinitely higher than all other beings. Since He alone possesses these qualities to a perfect degree, none other can properly appropriate these names.

AND HIS NAME SHALL BE CALLED WONDERFUL, COUNSELOR
HERE IS FAULTLESS DISCERNIBILITY. It is generally thought that five names are given in Isaiah 9:6 to describe the Lord’s character and reign. These five names are “. . . Wonderful, Counselor. The Mighty God, The Everlasting Father, The Prince of Peace.”

Let it be suggested that there are four names, not five. “Wonderful is not a name. It is sumply modifying “Counselor.” And with this view, the ancient Septuagint (Greek translation of the Hebrew Scriptures) and the immediate context agree.

The name Wonderful Counselor should not suggest the imagery of a clergyman, lawyer, psychologist or other professional in an office conferring counsel on a searching inquirer. Rath­er, it is speaking of one of the Lord’s characteristics while governing during the Kingdom age.

The prophet wrote, “And the Spirit of the Lord shall rest upon him, and the spirit of wisdom and understanding, the spirit of counsel and might, the spirit of knowledge and of the fear of the Lord … and he shall not judge after the sight of his eyes, neither reprove after the hearing of his ears” (Isa. 11:2-3). Men judge empirically— they see, hear, evaluate and make decisions — many times they are wrong. But because the omniscient Spirit rests upon Jesus, He will intuitively know right from wrong. He will not judge by what He sees or hears. He will uniquely be the Wonderful Counselor. As a result, “. .. righteousness shall be the girdle of his loins, and faithfulness the girdle of his waist” (Isa. 11:5).

AND HIS NAME SHALL BE CALLED… THE MIGHTY GOD
HERE IS ABSOLUTE AUTHORITY. One of the problems with the Old Testament theocracy (God ruling through chosen men) was that they had limited strength, A man might ascend to the throne of Israel. He might be well-intentioned. He might desire to do good and eschew evil. But there was a problem — he did not possess omnipotence. His good intentions notwithstand­ing, he often did not have sufficient power to bring his plans to fruition. Rebellion within the nation and opposition from without often frus­trated the best of plans.

But when government rests upon the shoulder of Jesus, “. . . with righteousness shall he judge the poor, and reprove with equity for the meek of the earth; and he shall smite the earth with the rod of his mouth, and with the breath of his lips shall he slay the wicked” (Isa, 11:4).

He alone possesses absolute authority because He is El Gibbor — The Mighty God.

AND HIS NAME SHALL BE CALLED .. . THE EVERLASTING FATHER
HERE IS ENDLESS LONGEVITY. On occa­sion a good king ascended to the throne of Israel men like David, Solomon, Hezekiah and Josiah. And for a time they brought a degree of prosperity, blessing and peace. But invariably, the inevitable occurred. They died. They were succeeded by another king. Often he was not a good king, and his policies did not follow that of his predecessor. Government was subject to ebb and flow,, as governors came and went But when the government is upon the shoul­der of Jesus, “Of the increase of his government and peace there shall be no end, upon the throne of David, and upon his kingdom, to order it, and to establish it with justice and with righteousness from henceforth even forever . . .” (Isa. 9:7).

Jesus is The Everlasting Father, or better, The Father of Eternity. He will not die — there will be no ebb and flow — only continuity of perfect rule.

AND HIS NAME SHALL BE CALLED…THE PRINCE OF PEACE
HERE IS ENDURING TRANQUILITY. Peace comes in two dimensions. There is vertical peace between God and man, and horizontal peace between man and man. The latter is impossible until the former is first achieved.

Jesus alone can bring peace to this warring planet. And when He does, “The wolf also shall dwell with the lamb, and the leopard shall lie down with the kid; and the calf and the young lion and the fatling together, and a little child shall lead them. And the cow and the bear shall feed; their young ones shall lie down together. And the lion shall eat straw like the ox. And the nursing child shall play on the hole of the asp, and the weaned child shall put his hand on the adder’s den. They shall not hurt nor destroy in all my holy mountain; for the earth shall be full of the knowledge of the Lord, as the waters cover the sea” (Isa. 11:6-9).

Because Jesus is the Wonderful Counselor, The Mighty God, The Everlasting Father, He is also SarShalom — The Prince of Peace. Men talk of peace — Jesus, at His second coming, will make it a reality.

This advent season, look back to Calvary and the first package sent by God and reflect on what was accomplished because a child was born and a son was given; but also look ahead toward the second package and what Jesus is still one day to accomplish because,”… the government shall be upon his shoulder …. “ 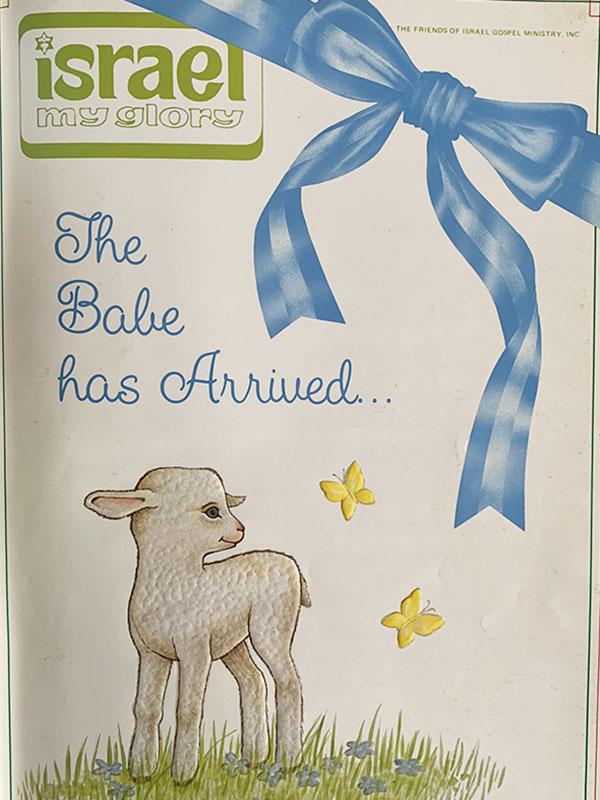