Recently a new book was shown to me which has as its theme the fact that Jewish-Zionists are the secret force bringing ruination to the Christian world. The author claims to be a born-again Christian, and the impression is given that this is the proper position to be held by alert, in-the-know believers. This book is entitled For Fear of the Jews (Vienna, VA: The Exhorters, 1982), and its final page styles it as, “The First Modern-Day Book Against Zionism from a Fundamentalist Perspective.”

The arguments presented are the familiar ones, echoed in anti-Jewish publications for years, and they are targeted at those members of the public searching for the secret as to why the world is going wrong. These arguments feature the claims that:

1. Zionist type Jews were and are behind the secret world society of the Illuminati which causes world revolutions – including the French Revolution (p. 12).

The term Zionist type Jews is used to avoid accusations of anti-Semitism. The implied reply is that they are not against Jews as such; only against conspirator-Zionists. (Zionism is the movement to establish a national Jewish homeland in Israel.)

The Illuminati  was “a short-lived movement of republican free thought founded as a secret society in 1776 in Bavaria by Adam Weishaupt, professor of canon law at the University of Ingolstadt and a former Jesuit” (Encyclopedia Britannica, 1980, V, p. 304). It is unproved: (a) that the society was ever controlled by Jewish people; (b) that it ever had great influence; (c) that it had any real force in the French Revolution, which Louis XVI to a good measure helped to cause; (d) that it has any influence upon communist governments today, or that it ever had; (e) that Israelis have ever had anything to do with such a society; or (f) that it is either honest or ethical to blame Jewish people of today for any plotting of a handful of insane conspirators, especially when such a “short-lived” group never even claimed to act under or for Jewish or Zionistic ideals.

Before 1917 Jewish people were persecuted in Russia under the Tzars. When the early communist propaganda came forth promising a new social order wherein all workers would be equal, many Jewish persons, along with those of a multitude of other groups, hoped that communism might become the savior of Russia. How many peoples have experienced this in our century! Marx was born Jewish, but denounced his faith; Lenin, the true father of Russian communism, was not Jewish, nor was Stalin, the dictator. Trotsky, of Brooklyn Jewish origins, was soon murdered at Stalin’s orders. Certainly today, with the Soviet Union pressing hard against its Jews and being the leading arms supplier to those who wish to exterminate the nation of Israel, it should be clear that Israel and the Zionist movement are totally anti-communist. Communism was never really Jewish, for even Karl Marx was not advancing Old Testament or Judaistic principles, but rather those of atheism. Today communism is anti-Jewish, anti-Zionist, and anti-Israel; it is neither honest nor sound to blame Jewish people today for creating or fueling communism. Would a racial-ethnic census of leading communists today shed light as to whom we should hate? Is this Christ’s will for His people today? Of course not.

Defined as a “fraudulent document that served as a pretext and rationale for anti-Semitism . . . purports a series of meetings held at Basel, Switzerland, in 1897 . . . Jews and freemasons . . . plans to disrupt Christian civilization” (Encyclopedia Britannica, 1980, VIII, p. 253). Were these genuine, it would still be unethical to blame all of Jewry. With the evidence that these are open forgeries – and certainly of questionable and suspect origin to even the most rabid anti-Jewish searcher – it is prima facie unethical to cite these to prove that Israel and Zionists are the plotters behind the world troubles of this century. When an Australian Christian a few years ago attempted to bomb the Dome of the Rock, the Moslem shrine mosque, in order to hasten the second coming of Christ, could all believing Christians be blamed and implicated – even if we could prove a plot by a handful? Of course not. In the same way, it is neither fair, truthful, nor right to blame all Jewish people for the Protocols . . . and since they are suspected (or rather, proven) forgeries, how could it be God’s will for the Christian public to be alerted against the Jewish people on such a basis?

With this conclusion the words are added, “The Lord will then use the world’s anger against Israel to accomplish His will – and the will of God is the destruction of the Harlot!” (p. 191). With such words crusades are begun. The harlot of Revelation 17 is taken by almost all believing interpreters to represent the end-time false church who rivals the bride, the true Church (Walvoord, Pentecost, Hoyt, etc.). It is the woman of Revelation 12 who is the end-time Israel (so marked by the sun, moon, and twelve stars which she wears which correspond with Genesis 37:9-10, Joseph’s dream of future Israel, with a star for each tribe). In Revelation 12 it is Satan, the dragon, who pursues Israel with a flood of wrath and persecution, while it is God himself (Rev. 12:6) who shields and rescues her!

This claim that it is God’s will that the nation of Israel be destroyed (p. 191) must be seen to be totally opposite to God’s Word. Zechariah 12:9-10 states, “. . . I [God] will seek to destroy all the nations that come against Jerusalem . . . and they [Israel] shall look [in faith] upon me whom they have pierced. . . .” Indeed the message of Romans, chapters 9-11, is that God is not done with Israel, but that at the end of the age “. . . all Israel shall be saved. . .” (Rom. 11:26). A book, such as the one being reviewed, which falsely paints God’s will as the destruction of Israel, must be seen as an anti-God message.

5. Israel (and hence Zionism) is anti-Christian because it does not freely permit Christian missionaries to evangelize (pp. 106-113).

While we would love to see the nation of Israel open its doors to evangelistic crusades, we must admit that by virtue of the continuous flood of tour groups which enter that country from America’s and other countries’ Christian churches, Israel probably receives today more personal gospel witnessing than any other nation. The accusation that Israel is anti-Christian begs the real question and, along with the tone of this entire book, the concern seems to be more to vilify Israel than to win Jewish souls to Christ. Israel’s conversion should be the object of our prayers (Rom. 9:1-3), and such books as this one will only make it even more difficult to have Christian workers admitted. Israel is still to an extent attempting to be an Old Testament theocracy, and not until they are converted will they see the desirability of permitting missions to have a free reign and to begin to convert their children and people. Few believers permit members of groups which they feel to be cults to solicit among their families or schools. Israel is a nation with a claimed Old Testament national faith, and it should not surprise us that they do not therefore welcome missionaries. On the other hand, unlike so many other nations, they are not imprisoning or murdering missionaries. Israel today is literally filled with Christian tourist-missionaries, and we must undergird them with prayer; not with anti-Jewish, anti-Zionist literature such as the present book under review.

6. The Jewish Babylonian Talmud is the secret evil book behind Israel’s plans (p. 191).

The Talmud, issued from Babylon because of the Jewish dispersion, is the sayings of the rabbis in written form. It was written from 70-600 A.D. and is as long as a set of encyclopedias. Reading like a rabbinical book of Leviticus, it typically gives rabbinical opinions as to whether one can pray while climbing a tree, or whether a lamb’s bone from last year can be used at Passover this year. Most modern Israelis and/or American Jewish people are almost totally unfamiliar with the Talmud. I have taught Talmud in Jewish backgrounds courses to Christian students, and within twenty minutes of free examination of the Talmud, any student will know that here is not a Jewish plot to take over the world. The author’s suggestion that when “the Gentile world at this time sees the close relationship between Israel and the Babylonian Talmud . . . the jig will be up for Israel” (p. 191) must be entirely rejected as any type of justification for nations to line up to destroy Israel.

7. “. . . and the Goyim (a derogatory term meaning cattle used by the Jewish people to describe the Gentiles).”

As a teacher of biblical Hebrew, and as any teacher of Hebrew will affirm, let me make clear that the noun goyim is a plural word appearing many times in the Old Testament. It means nations, like the New Testament Greek ethnoi. The King James Version translates it as nations over and over, and occasionally it is interpreted in a condemnatory context, as heathen – those who are estranged from the one true God. Not once in the years before my conversion did I ever hear a Jewish person define it as cattle, etc.

Does such a book, which makes the claims above, and which sounds much like Hitler’s Mein Kampf (and this is not written as a slur, but as a valid comparison by one who has read both) represent the historic Christian faith? No. The thesis of Romans 9-11, three chapters, is that God will yet save the Jewish people for the sake of His sacred promises made long ago to the patriarchs (Rom. 11:26-29).

The problem of this world is sin. Satan’s end-time forces are lining up a multi-nation communist force with worldwide revolutionary appeals and a growing secular humanism that denies God in every aspect of life. With these we can expect voices to rise, echoing the dream of Satan as portrayed in Revelation 12, to destroy Israel and the Jews. True Christians must stand against such. Some people do not see the Bible’s portrait that the human race itself has fallen into sin, and only Christ can save. They instead are searching for some hidden secret that will suddenly and simply explain all the evils of our day, with its revolutions and economic troubles. This mystery is the mystery of iniquity, sin. If the Jewish people did not exist, or had never lived, this world would still be lost in sin. Any book or leader that has as its or his thesis the fact that the prime cause of this world’s troubles is Israel and the Jewish people or any other race or ethnic group, is not of Christ. Christians must not be deceived by such.

Paul gives us the true apostolic example, and every true Christian should indeed follow it; “Brethren, my heart’s desire and prayer to God for Israel is, that they might be saved” (Rom. 10:1). How different is Paul’s holy passion here expressed from the spirit found in the book reviewed. Fortunately, the vast majority of born again Christians witness to the love of Christ by their lives and words, and fortunately the viewpoint of the book reviewed does not represent that of God’s people.

It is with considerable reluctance that we publish this book review. Such books do well not to enjoy the privilege of being promoted (even negatively) to God’s people. However repugnant such a book is to the spiritually discerning, first because it purports to be “Christian” and second because the ideology it presents wilI increase as we move toward the end of the age – I have felt constrained to print it that those redeemed by the blood of the Lamb will be forewarned and therefore forearmed to eschew such an evil, non-biblical philosophy. 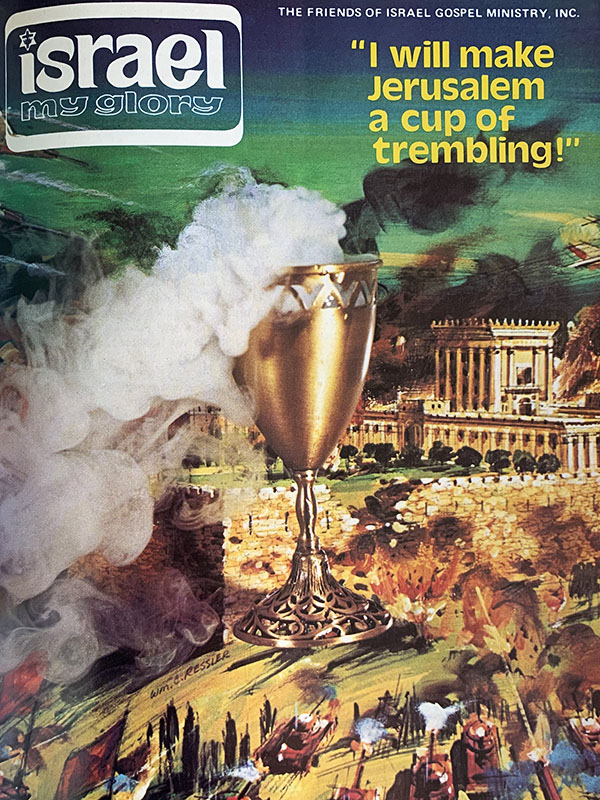