I was raised in a Christian home with parents who were committed believers in Jesus. Being a pastor’s family, we weren’t simply at church every time the doors were open; we unlocked the doors. I memorized hundreds of Bible verses and could easily recite the stories of the New and Old Testaments.

To a casual observer, it appeared I was a Christian. I was born into a Christian home, and Christianity and my local church were all I knew. But no one is born a Christian. Not even a pastor’s daughter. Christianity requires a conversion initiated and completed by God.

The Wrong Answer
Sure, my identity was wrapped up in Christianity and the things of God, but my heart was in need of a Savior. I just didn’t realize it. If asked, I would have said I was a Christian; but as I grew into my teen years, I could see something different in many of my friends. I just couldn’t put my finger on what it was.

When I was 17, a youth leader asked us at an event, “Why should God let you into heaven?” I looked around the room at my classmates. Knowing many of their flaws, I whispered proudly to my friend, “Because we’re better than most of the people in this room.”

I’ll never forget what that leader said: “Any answer other than ‘because of what Jesus did for me on the cross’ is the wrong answer.”

Though I dismissed his reply, that night became a major turning point in my life. I decided I would stop trying to be good. I would stop trying to be someone I was not. I decided being a believer was too difficult, and I started to walk away from the teachings of my childhood. For the next four years, I lived the way I wanted, concluding Christianity was for my parents, not for me.

By the time I was 21, I had hit bottom. After years of living for momentary pleasures, I was exhausted. I remember thinking, Is this all there is? That was when I decided to return to church. I started attending Sunday school and teaching children’s church and became involved with our college group. The people in the college group accepted me with open arms; but again, there was something different about many of them that I couldn’t put my finger on. I decided I wasn’t like them because of the years I had walked away from Christianity.

‘He Wanted Me’
My parents bought me a study Bible, and I started reading the familiar words of my childhood. I was diligent in reading because I wanted to be able to participate in conversations with my new church friends. Someone suggested we all sign up for a new class being offered on the basics of Christianity. It was in that class that God started showing me what I was missing.

We learned that God is a pursuer of men. He made a way to have a relationship with us:

Now all things are of God, who has reconciled us to Himself through Jesus Christ, and has given us the ministry of reconciliation, that is, that God was in Christ reconciling the world to Himself, not imputing their trespasses to them, and has committed to us the word of reconciliation (2 Cor. 5:18–19).

I thought, Could I have missed it all these years? God didn’t want my list of church accomplishments. He wanted me.

As I sat in this class week after week with a lump in my throat, a spiritual battle was taking place. I was fully aware of the sin in my life that separated me from God, and I was having a hard time with the reality that God had humbled Himself to make a way for me to have a relationship with Him by sending His Son, Jesus, to die for my sins. I was also struggling with the fact that I was the pastor’s daughter, but I was not a Christian. I wondered, What will people think? I’m teaching their children in children’s church. They will call me a fraud!

One night in class, a friend shared she had been struggling with doubt about her salvation. She thought she was a Christian, but God had shown her she lacked a true relationship with Him. She said she struggled for months and finally surrendered her life to Christ in her room one night and was being baptized that evening in the service. I looked around, expecting to see shocked faces. After all, she was a youth leader! Instead, everyone burst into applause, cheering and hugging her. I sat there in shock and cried. My fears of being found out were fading away.

That night in the Sunday evening service, my dad taught on the fruit of the Spirit from Galatians 5:22–23. As he explained each fruit, I made a checklist, thinking I had mastered many of them: love, joy, kindness, gentleness, goodness. The ones I didn’t feel I had mastered I figured I could work on. Then he made the statement God used to pierce my heart: “The fruit of the Spirit are not pieces you pick and choose. They’re a package deal that you receive at salvation.” That was all the confirmation I needed. I gave my life to God that night.

I have heard it said, “God does not have grandchildren, only children.” Each person is accountable for his or her own actions before the Lord. My parents’ faith did not automatically give me the same faith. The biggest benefit I had growing up was all those years of Bible lessons and Scripture memorization. They were the kindle on a fire that burned fast and bright after a spark from the Holy Spirit.

After I became a Christian, I grew quickly in my faith. The Bible came to life for me, and the Bible stories I learned as a child pointed to the bigger story of God’s love and plan of redemption for mankind.

So, I told the older gentleman, “Yes, I am a pastor’s daughter. But I was not a Christian until I was 21,” even though I was reared by faithful, godly parents and loved by a faithful church family. And today, as the apostle Paul wrote, I am an “ambassador for Christ.” And “[I] implore you on Christ’s behalf, be reconciled to God. For He made Him who knew no sin to be sin for us, that we might become the righteousness of God in Him” (2 Cor. 5:20–21). 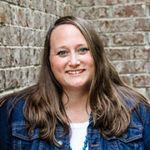 Sarah Fern is the Executive Director of Choices Resource Center in Oak Ridge, Tennessee. She lives in the Knoxville, TN area with her husband, Martin, and their son.

1 thought on “Getting the ‘Package Deal’”