How God brought a straying child back to the fold
My story begins with my father, who was enjoying recognition as a successful research chemist despite two big problems: He was a functioning alcoholic and an atheist. Through a Christ-follower at his lab, my father became a Christian and soon left for seminary. There he met and married my mom and became a church planter, pastoring 13 churches all over the southeastern United States. This is the home into which I was born.

At age 7, I understood the gospel under my daddy’s preaching. I trusted Jesus as my Savior, was changed even at that young age, and grew spiritually. When I was 9, my mom let me help teach the neighborhood children in a Good News Club.

When I was 11, everything changed. My father accepted a new pastorate, and our family moved to Delaware. Suddenly, I felt lost and alone. I began to resent my father, who by any standards was unreasonably strict. I no longer wanted to be a preacher’s daughter and started walking away from God, even though I knew I belonged to Him.

I sought acceptance and happiness from ungodly activities, sneaking out at night to be with boys my father had preached to in the local detention center. Soon I was shoplifting. Once I stole an expensive sweater from a department store and eluded the security guards chasing me by running outside and hiding.

At school I didn’t want to be identified as the local pastor’s daughter, so I tried to change my appearance. When I dyed my hair jet black to look Goth, I was severely punished. My parents knew I was going rogue and prayed desperately that God would rescue me before I went too far. Little did they know how far I had already gone. And little did I know that God never let go of me and that His steadfast love would bring me back to Him.

Like a Chameleon
Throughout my rebellion, I never once doubted my salvation. Though we forsake Him, He never forsakes us. “The Lord knows those who are His” (2 Tim. 2:19); and He has a way of reaching us. I often hid in my room, locking my door and listening to music. But when I went to bed, I sensed God’s voice in the stark silence of the night.

Even in my rebellion, I felt burdened to share the gospel with my unbelieving grandma; and she trusted Christ as her Savior. Though my bitter lifestyle held me firmly in its grip, I continued to sense God pulling me toward Himself, assuring me I was His.

They discussed how I had shamed God’s name and hurt my father’s ministry.

It wasn’t long before the church elders showed up at our home to confront us. They discussed how I had shamed God’s name and hurt my father’s ministry. They sorrowfully prayed over me, then asked Daddy to resign. Three months later, we were in Chattanooga, Tennessee, where my father had accepted a professorship at a Christian university.

Now I could breathe. No more pastor’s-daughter stigma. I resolved to turn over a new leaf. I made better grades, got involved in extracurricular activities, and attended church. But I already had picked out the girls who were living the chameleonic lifestyle, and they accepted me.

I became involved in vocal groups, sports, drama, writing, and many other activities that brought self-esteem and popularity. Interestingly, God was developing these talents for His use later. However, through all this self-discovery, I still kept Him at arm’s length.

One day, after turning down several invitations to attend a local Word of Life teen club, I decided to go. This group of fun-loving teenagers and young leaders accepted me warmly. After refreshments and a game, the teens began sharing what God was doing in their lives through “quiet time” (personal devotions) and answered prayer. I had attended church all my life, but I had never known kids like these who manifested a vibrant, active relationship with God.

Again, I felt drawn to the Savior who had been trying to get my attention for so long. I returned each week and watched these students live out their faith. But I was not about to jump on board.

Returning to the Fold
In my sophomore year of high school, I attended a winter youth retreat in Florida with several school friends. We were determined to guard ourselves from anything that smacked of Bible. We played along until the last night, when the big dedication-campfire service began.

Sitting in the back, we smugly tuned out the speaker. But Paul Bubar had such a charismatic personality and straightforward message that I found myself sitting at attention. Paul, who was then director of Bible Clubs Ministry for Word of Life, was sharing the story of the prodigal son from Luke 15. Suddenly, I realized I was that person. I was the one who had walked away from a Savior who loved me. I was the one who had bought into a self-centered lifestyle.

Sometimes Christians can fall so deeply into sin that we forsake the one to whom we belong. We live for ourselves instead of for God, and we look exactly like unbelievers. We fracture our relationship with God. But like the prodigal son’s loving father, God is still there—waiting for us to come home.

On the 12-hour return bus ride, a youth volunteer who was exuberant about her newfound relationship with Christ shared her conversion story with everyone on the bus. By the time she finished, I was weeping. I knew I didn’t know Jesus in the deep, personal, and satisfying way Nancy described. I had turned my back on His love.

I felt cleansed, forgiven, and completely new. I already sensed God’s transformational work in my life.

As Nancy put an arm around me, I confessed my sins for two hours. I felt cleansed, forgiven, and completely new. I already sensed God’s transformational work in my life.

When my father got up the next morning, he cracked open my bedroom door and was shocked to find me reading the Bible. I was reading from Psalm 32: “Blessed is he whose transgression is forgiven, whose sin is covered” (v. 1).

Living for Christ
After that, my life changed dramatically. Feeling convicted by God’s Spirit, I wrote a letter to the owner of the store where I had shoplifted the sweater, confessing my dishonesty and sending him four times the price of my theft. Amazingly, he wrote back. He had shared my letter with his church youth group and told me a number of students related to my testimony and made decisions to trust Christ.

As I continued to grow spiritually, I decided to become a missionary in my large, public high school. With other Christian teens, I started a daily Bible study that grew exponentially. Over the next two years, God gave me the amazing privilege of leading more than 100 students to Christ.

I went to college and also to the Word of Life Bible Institute, where I met my husband, Mike. We both felt called to work with youth for the rest of our lives. We ministered for 43 years in a plethora of positions and places with Word of Life, seeing thousands of young people come to Christ. Today Mike leads The Summit Church ministerial training ministry in Durham, North Carolina. His website is mikecalhoun.org.

Over the years, life has thrown us major curveballs, but we continue to rest in the God who redeemed me when I was 7 years old, brought me back to Himself when I strayed, and saved me from what could have been a disastrous life. He continues to transform me day by day, as He does all His children, by His grace and for His glory. 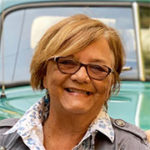 2 thoughts on “He Never Let Go”