The English word holocaust comes to us through Latin and is derived from a Hebrew word meaning a sacrifice taken to the altar to be burnt before God. The Old Testament Jews were familiar with this concept of total burning or holocaust because of their sacrificial system. The lamb was slain as an innocent victim on the altar of burnt sacrifice as a type of our Savior’s death (cp. Lev. 1 and Jn.1:29).

However, the above usage is not what we think of when we use the term holocaust today.

The word holocaust, as referred to today, has to do with that recent period of Jewish history (the most tragic in modern times) from January 30, 1933 to May 8, 1945. These twelve years of Nazi power in Europe under Hitler constituted an ever increasing progression of barbarity which led to an attempt to totally exterminate all the Jewish people — in a word, genocide — the annihilation of a race. Walter Lacqueur in a recent book. The Terrible Secret – Suppression of the Truth About Hitler’s Final Solution, objects to the term holocaust since Israel was not being sacrificed in any sense. He realizes however that the term is too rooted now to ever be changed. The Encyclopedia Judaica says: “The nature of the Holocaust is unique. Millions of Jews ~ some for periods of 12 years — lived under the all-pervading Nazi power, enduring its threats and its Aktionen. The Jews lived in agony. Tortured by anxiety, insecure in the present, unable to anticipate the future, torn between hope and despair, they were helpless in the face of a tremendous machine always ready to crush them. The psychological effects on those who had to live through this period of total persecution are beyond even superficial description. This survey is an attempt to trace at least the external events, the extraordinary human suffering of a specially selected ‘race,’ pursued over the length and breadth of a continent and beyond, condemned to mass murder. Integrated or segregated, educated or ignorant, rich or poor, young or old, every Jew was condemned. East European Jewry, however, was especially singled out, in the belief that by destroying this reservoir of Jewish population and culture, the Nazis would have the ultimate ‘solution’ to the ‘Jewish question.’”

For all of the background and historical details of this period one can consult standard works like The War Against the Jews, 1933 – 1945 by Lucy Davidowicz, My Country by Abba Eban, The Book of Jewish Knowledge, Nathan Ausubel, pp. 313-321 and the Encyclopedia Judaica under “Anti- Semitism.”

The holocaust is probably the most thoroughly documented event in human history, but in spite of that some allege that it never occurred! Some say it is a “myth” or an invention of the Zionist imperialists to gain sympathy and further their expansionist lots. Such book titles as The Myth of the Six Million and Debunking the Genocide Myth are seen.

Every thinking believer ought to know the facts of the holocaust. If possible, one should visit Yad Vashem in West Jerusalem. The Yad Vashem compound is on the Mount of Remembrance, and in its lower story it displays a photographic re-creation of the history of Nazi anti-Semitism. Throughout the museum (containing models of some of the death camps) one can trace the movements and statistics of the holocaust period through maps, documents, diaries and artifacts! The Ringlebloom diaries were sealed in milk cans in Poland and exhumed after the war. They contained copies and records of every order posted by the Nazis in the Warsaw Ghetto. In 1954 veteran historians in Israel began to gather all the material they could find regarding European Jewry during the Nazi regime. It was a gruesome but necessary task, and information continues to be gathered. Yad Vashem is the fruit of that labor. The massive archives contain the names of those slaughtered (sometimes whole families), descriptions of the death camps, details of “medical” experiments and the records of the war crimes trials after 1945.

In spite of all this massive evidence (including testimony of the survivors of the death camps), there are so-called “revisionist” historians saying Zionism contrived the statistics of the holocaust. One wonders if they should not join the flat earth society, as facts no longer seem to matter, Newsweek Magazine (October 19, 1981) reported a story called “Footnote to the Holocaust.” It reported that a businessman in Los Angeles who is a survivor of a death camp, owning a small museum containing human hair, ashes from crematoriums, poison gas pellets and other horrible mementos, has gone to court against a group of “revisionist” historians (euphemism for Zionists always lie) who claim that Jews were not put to death in gas chambers. These revisionists state that the holocaust is a myth — a lie. They circulate writings to that effect. They claim that the bulging archives in Jerusalem and Washington, D.C. (America filled seven boxcars with German records in 1945), showing a pre-war population in Europe of almost nine million Jews (reduced by more than 67% by Nazi extermination), are somehow not to be trusted. Oh, they admit, perhaps a few hundred thousand Jews died from all causes during that period, but so did others of other religions. One wonders at this point why German Chancellor Adenhauer consented to pay Israel $1.5 billion restitution in 1951 for something that never happened. Subsequently, Israel accepted $822 million over a twelve-year period, but only after stormy parliamentary debates with Ben Gurion for the payments, and Menachem Begin vehemently and violently opposed. (See Ben Gurion by Michael Bar Zohar, p. 195- 198.) The Los Angeles superior court ruled in the above case that the holocaust was a fact “not reasonably subject to dispute,”

The thing we come back to is how we know what we know about the holocaust, is it only Israel? Is it only Yad Vashem? Is it only the Allied forces and their reports? Is it only the survivors themselves? Any one of these would be enough, but it is all of these and more! The above evidence is massive, overwhelming, incontrovertible. However, the most extensive, complete, detailed information comes from the Germans themselves! We must keep remembering they themselves provided the firsthand facts. The Korherr Report (Korherr was the official statistician commissioned by Himmler) records almost 3 million Jews killed by March 1943.

Huge amounts of files, photographs and records were confiscated in Germany after World War II. (See About the Holocaust – What We Know and How We Know It by Dorothy Rabinowitz.) Large archives exist in Russia, the Vatican, Israel, Germany, England and Sweden. The contents of all of them attest to the same thing.

Adolph Eichmann was given complete responsibility for the “final solution” (Hitler’s code word for the annihilation of all Jews), and he insisted on detailed records. When he came to tria! in Israel in 1961 there were 1,600 documents from German archives to face him. Along with this there were 100 eyewitnesses from death camps. Tape recordings of Eichmann’s statements along with his printed addresses show him talking of at least five million Jewish deaths before the end of the war. The book House on Garibaldi Street, by Isser Harel tells of Eichmann’s capture and subsequent trial in Beit Ha’am center in West Jerusalem.

As General Eisenhower toured the death camps in April of 1945, he said: “I have never been able to describe my emotional reactions when I first came face to face with indisputable evidence of Nazi brutality and ruthless disregard of every shred of decency. I am certain, however, that I have never at any other time experienced an equal sense of shock.”

The plain fact is that all the evidence for the holocaust was set down by both Nazis and Jews and neither of them disagree. The Nuremberg trials from 1945 on produced forty-seven volumes of evidence. The killing squads, the death factories, the ovens, the mass burials were all recorded by the pens and cameras of the Germans themselves!

How can anyone with any logic or sanity deny the facts, for none of this can be gain-said.

Ninety percent of Polish Jewry was wiped out, as well as ninety percent of the Baltic countries. In white Russia sixty-five percent were massacred — and on and on. Winston Churchill, in correspondence with Anthony Eden in July 1944, said, “There is no doubt this is probably the worst single crime ever committed in the whole history of of the world” (Auschwitz and the Allies, Martin Gilbert).

We must know because we need to see the effects of rejecting Christ by men and nations (Rom. 1).

We must know because God holds out special blessings and terrible warnings regarding relationship to Abraham’s physical seed: “And I will bless them that bless thee, and curse him that curseth thee, . .”(Gen. 12:3}.

We must know because we need to look forward to the coming of the only One who can end all wars and bring lasting peace, even our Lord Jesus Christ: “I consider that our present sufferings are not worth comparing with the glory that will be revealed in us. The creation waits in eager expectation for the sons of God to be revealed. For the creation was subjected to frustration, not by its own choice, but by the will of the one who subjected it, in hope that the creation itself will be liberated from its bondage to decay and brought into the glorious freedom of the children of God. We know that the whole creation has been groaning as in the pains of childbirth right up to the present time. Not only so, but we ourselves, who have the firstfruits of the Spirit, groan inwardly as we wait eagerly for our adoption as sons, the redemption of our bodies” (Rom. 8:18-23, NIV). 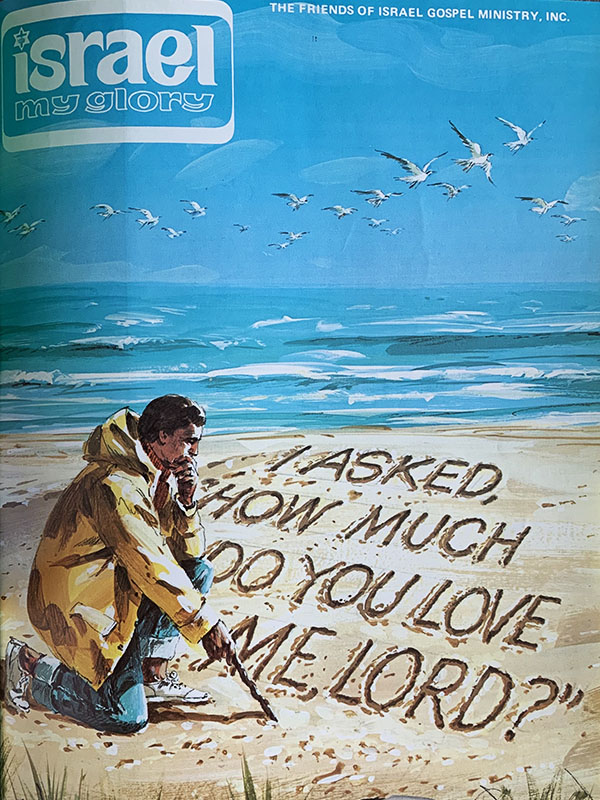