Jewish people are filled full with a zest for life. Candid and outgoing, they are often more recognizable by expression and gesture than by facial appearance. Rarely satisfied with being spectators, Jews prefer to roll up their sleeves and climb down into the arena, there to actively participate in the ‘game’ of life. Their outgoing nature has prompted the cliche, “When you have twelve Jews, you have thirteen opinions.” It is an undeniable fact of history that proportionately, no people has made a greater contribution to humanity than has the Jew. Medicine, science, technology, mathematics, law, literature, art, government and education — these are representative of but a few of the disciplines to which the Jew has put his hand to ennoble and enrich human experience.

During the first half of this century, sixty Nobel Prizes were won by Jewish scholars. Since 1908, twenty-five percent of the Nobel Prize winners in medicine were Jews. This would be an astounding achievement for any great nation with hundreds of millions of citizens, but the Jewish population of the entire world amounts to less than fifteen million people.

These contributions, considerable as they are, fade into insignificance when compared to the religious legacy given the world by descendants of Abraham, Isaac and Jacob. To this very hour, Christians throughout the world acknowledge that Abraham is the supreme example and spiritual father of all those who have, by faith, accepted Christ as Savior. The law given by Moses and the writings of the Jewish prophets were a considerable part of the foundation upon which the Western World was erected. Their positive contribution to human history is incalculable. But towering infinitely above all other Jews in their contribution to humanity is this One called Jesus the Christ (Messiah). So significant was His life that time itself is measured from His birth. He is the focal point of all human history. Through His life and preaching He taught men how to live, but more than that, He taught them how to die. He claimed, “I am the resurrection, and the life; he that believeth in me, though he were dead, yet shall he live” (Jn. 11:25).

Since the beginning of time, death has been mankind’s greatest fear and immortality its brightest hope.

On a tombstone in a small cemetery in the Midwest were etched these thought-provoking words:

Stop my friend, as you pass by.
As you are now, so once was I.
As I am now, you will surely be,
So prepare yourself to follow me.

Rabbi Jochanan Ben Zaccai, a rabbinic Jew of the second century A.D., was lying on his deathbed. His disciples came to visit him, and on seeing them tears filled his eyes as he cried bitterly. “Rabbi,” exclaimed the astonished disciples, “dost thou cry, thou the light of Israel, the right hand pillar of the temple, the mighty analyzer of the law?”

“Ah, my children,” sobbed the dying sage, “I would not weep if I were at this moment brought before an earthly king who may be in his grave tomorrow, whose anger and punishment could not last forever, and might be moved to pity by words of entreaty, or might be pacified with a gift. You ask me why I weep when I am about to be led into the presence of the King of kings who lives forever, who will not be moved by pity or by words of entreaty, or will not be pacified by an offer of a gift. There are two ways before me, one leading to paradise and the other to Gehenna (Hell), and I know not whither I am going” (Perachoth 28B).

Rabbi Ben Zaccai realized that one day soon he must stand before an eternal, all powerful and infinitely righteous Judge. He knew that eternity was open before him, but whether of bliss or torment — that he did not know. He was a religious teacher, trained to teach others, but he did not have the answer for his own life.

A reformed Jew of the nineteenth century A.D., Emanuel Deutsch wrote a book entitled What Is The Talmud? In it he tried to show that Jesus was a plagiarist and that He copied the rabbis. When Deutsch was at the height of his popularity, his health gave way, and he was advised by his physician to go to Egypt, there to try to regain his lost vitality. Soon after reaching Egypt, he realized that he was fighting a losing battle, and he wrote this pathetic confession in his diary: “I cannot take comfort in death. I want to live. There is so much life, full life within that it shrinks from darkness and deadness. I envy those who can fly on the mind’s wings to this (death’s) harbor of refuge; I cannot follow, but keep tossing outside in my broken craft through foam and rock and mist” (From library remains of Emanuel Deutsch, page 12).

For Deutsch, at life’s end there was only fear and uncertainty. How tragic that as death was about to overtake this distinguished Jewish scholar, the ship in which he found himself was but a broken craft in the middle of a storm of foam and rock and mist. Fear and despair were his only traveling companions.

Saul of Tarsus was a zealous Jew of the first century A.D. He trained under the distinguished Rabbi Gamaliel in preparation for service on the Sanhedrin, the highest court in Israel. But one day he saw in Jesus Christ of Nazareth the precise fulfillment of all the messianic hopes and longings as revealed in Israel’s Holy Scriptures. He realized that here was the One in whom the Old Testament offices of Prophet, Priest and King merged — here was the promised Messiah. He had the courage to break with human tradition and follow divine revelation. After a dedicated life of service to his Lord, Paul found himself in a Roman prison soon to be executed because of his faith. Death was near and he wrote,

For I am now ready to be offered, and the time of my departure is at hand. I have fought a good fight, I have finished my course, I have kept the faith; Henceforth there is laid up for me a crown of righteousness, which the Lord, the righteous judge, shall give me at that day; and not to me only, but unto all them also that love his appearing (2 Tim. 4:6-8).

Paul’s confidence in life on the other side of death was so strong that more than ten years earlier he had written,

For we know that if our earthly house of this tabernacle were dissolved (the body), we have a building of God, an house not made with hands, eternal in the heavens (2 Cor. 5:1).

Hear this great Jew once again as he writes to the believers in Messiah Jesus at Philippi,

The contrast between the rabbinic and reformed Jews on the one hand, and the believing Jew on the other, is as marked as the difference between hope and despair, day and night, life and death. At a Jewish funeral, the rabbi will elegantly eulogize the deceased person. In glowing terms, the rabbi will tell of the deceased’s contribution to family, friends and society — of his meaningful life. But there will be no assurance of hope beyond the grave — no meaningful comfort to bereaving loved ones will be uttered. How final the obituary page of a Jewish newspaper I recently read while in Israel. It listed the deceased person’s name, and then said, “He is no more.” But why such a marked difference? Hear the words of the Apostle Paul once more,

. . . I know whom I have believed and am persuaded that he is able to keep that which I have committed unto him against that day (2 Tim. 1:12).

The greatest contribution Israel made to the world was not physical but spiritual, not temporal but eternal. Her greatest theologian was Saul of Tarsus, later to be called Paul the apostle. By divine revelation, he saw clearly that there is HOPE, MEANING and PURPOSE to living because there is LIFE beyond the grave.

Man was created in the image of God. It is this fact that sets him apart from and infinitely higher than the animal world. It is in this likeness to God that the worth, morality and dignity of man is to be found.

God breathed into man the breath of life, and man became a living soul. Man was created to live forever. There is no such thing as soul sleep or cessation of existence or total annihilation. Every man will live forever. It is the quality of life that is at stake. For some it will be an endless life of bliss in the presence of God. For others it will be an endless life of torment in the presence of the wicked one.

Jesus put it this way,

When a human being passes from this life, loved ones and friends left behind are often heard to say, “HE’S GONE.” At such a moment, the supreme question is, “GONE WHERE?” How would loved ones answer that question if your life were suddenly to end? If you’re not CERTAIN, you’re CERTAINLY not prepared for that CERTAINTY. God’s Word says, “. . . it is appointed unto men once to die, but after this the judgment” (Heb. 9:27). For the one who realizes that through his sin he is separated from a Holy God, who sees in Jesus the true Passover Lamb, who accepts the substitutionary provision of Christ’s death on Calvary, the answer would be, “GONE TO HEAVEN” — with eternal life abundant and free.

On the ‘wings of death’ the soul takes flight,
Into the land where there is no night.
For those who believe what the Savior said,
Will rise in glory though they be dead . . . ,
So death comes to us just to ‘open the door’
To the Kingdom of God and life evermore.

Death, for the one who comes to God on His terms, is not a hopeless night, but a glorious sunrise of light and life in unending fellowship with the everlasting God.

EDITOR’S NOTE: I was awakened out of a sound sleep and felt strangely moved to rewrite and republish this article which had appeared in the Aug./Sept. 1977 issue of ISRAEL MY GLORY. I can only conclude that a loving God wants this message conveyed to a needy soul. 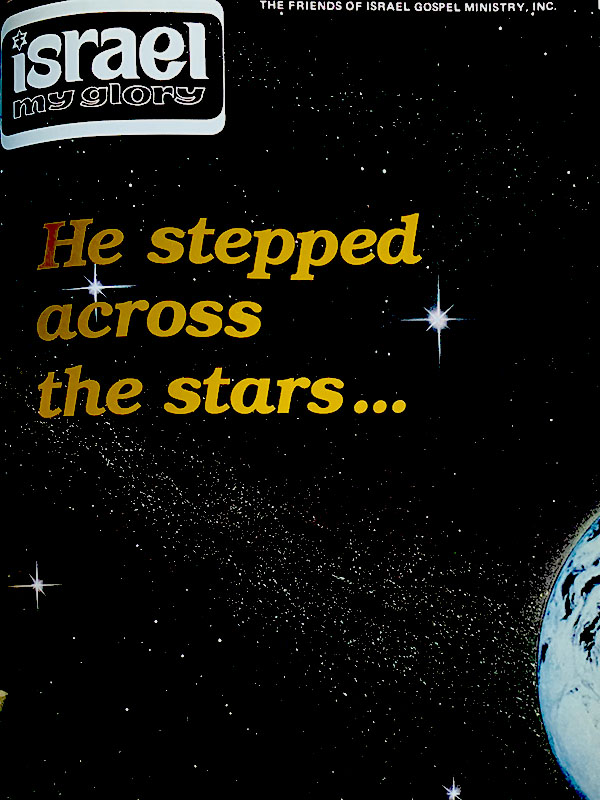