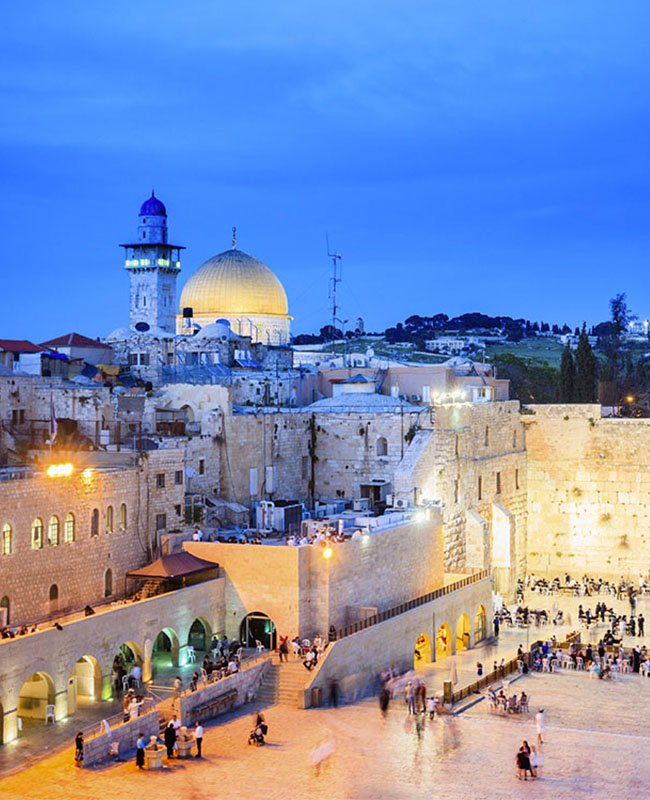 UP TO JERUSALEM TOURS
Experience the Holy Land for yourself by joining us on one of our Up to Jerusalem Tours.

As a frequent traveler to Israel, I know enough to go to a specially designated area for taxis located outside the terminal at Ben Gurion Airport in Tel Aviv. A ride from there ensures a safe trip at a fair price. Yet, on my recent visit to Israel, I did something foolish: I used a taxi from an undesignated area. To make matters worse, I wasn’t alone. I was with my wife, my sister-in-law, and her husband the day before we were to meet our Canadian Up to Jerusalem tour group.

I can’t tell you why I did it. I’ve never done it before. The decision easily could have resulted in disaster. But by God’s grace, He took my mistake and turned it into something wonderful. Here’s the story.

The Fiasco
Knowing I’m an experienced traveler, my wife and her family followed my lead as we set out for Israel. Our journey began well. Traffic was light, and we breezed through security and relaxed comfortably while waiting for our flight to Tel Aviv. We arrived ahead of schedule, retrieved our luggage, and went through Israeli security in record time. All that remained was getting a taxi to our hotel and enjoying our first Israeli dinner.

As we left the airport, we stopped to take a picture with Israel’s first prime minister—well, with the bust of David Ben-Gurion, for whom the airport is named. As we posed, a man approached me and offered to take the photo so we all could be in it together. Then he asked if we needed a taxi. Without hesitation, I responded, “Do you have room for four people and eight pieces of luggage?” He did! That’s when I was foolish and followed him.

The first red flag went up when he led us to the parking lot—in the opposite direction of the designated taxi area. As we schlepped our eight pieces of luggage, the next red flag appeared: He couldn’t find his taxi. Five minutes later, he waved to us, pointing to his car with the sign “Taxi” affixed to the roof. My relief was short-lived as I saw fear creep over the faces of my fellow travelers.

Red flag number three went up as he took off. He tried to get out of the parking lot without paying. He tailgated the car in front of him, hoping he could slip through the lane before the bar came down. Each time he failed, he changed lanes and tried again. Finally, he shot through on the tailgate of another car. If my wife’s looks could kill, I would be dead.

As soon as Ossi, as he identified himself, pulled his pay-avoidance move, lights began to flash. Some of Israel’s finest were signaling us to pull over. Ossi turned to me and said, “Tell them you called me to be your driver.”

He pulled over and got out of the car. That’s when the shouting and hand gestures began. A policewoman came to our car and told us, “You are not in a taxi.” We didn’t understand.

“No,” she said. “This is not a taxi. Wait here. We are calling a real taxi.” As we exited the fake taxi, it began to rain. There we stood, rain falling, eight pieces of luggage out on the road, and the four of us looking like lost immigrants in a strange country.

We followed the police to an area where a real taxi picked us up. The Israeli police could not have been nicer or more helpful, even helping us with our luggage. I apologized for my mistake. One replied, “No, we are sorry. It’s not your fault. Unfortunately, this happens all too often. It is deceitful and dangerous. Tourists are getting ripped off, which reflects poorly on our country. Worse yet, some people who refuse to pay an exorbitant fare are attacked, and their lives are put in danger.”

God’s Amazing Grace
Soon our new cab arrived. That was when God stepped in. The driver loaded our luggage into his legitimate taxi, and the police quoted me the exact price to go to the hotel. As we drove off, I introduced myself and began a conversation with the driver. His name was Jonathan, and he truly was God’s gift to us.

Jonathan emigrated from the Czech Republic in 2000 to build a better life in Israel. I asked him many questions, and he was more than willing to provide answers. He was the son of Holocaust survivors. His parents did not talk much about their experience, a common thing among survivors. Jonathan worked hard, usually 16 hours a day. He said the first eight hours were to pay for his taxi and the next eight were for his living expenses. He has three children, his youngest being 14 years old. In light of the geopolitical situation, he was wondering if his decision to move to Israel was right.

Israel was facing an election in April, and when I asked him for a prediction concerning the outcome, he said he was certain whoever won would not be successful. He believed Judaism and Islam were on a collision course with each other and that things had never been this way before. I quoted King Solomon, “There is nothing new under the sun” (Eccl. 1:9), and the prophet Jeremiah: “The heart is deceitful above all things, and desperately wicked; who can know it?” (Jer. 17:9).

“You made a great decision in coming here,” I told him and explained my understanding of Israel’s situation: enemies all around, Hamas to the southwest in Gaza, Lebanon and Syria to the northeast and northwest, the Sinai border controlled by Egypt but dominated by the Muslim Brotherhood in the southwest.

“You must be Jewish,” he said. “You talk like a Jew.” I told him I was and that I was leading a tour of mostly Canadian Christians who, like me, love Israel and believe God gave the Jewish people this land. He responded, “No one seems to have the answer to this situation.”

“But there is someone who has the answer,” I told him. And then I took him on a cruise through the Jewish Scriptures. Beginning with the beginning, I talked about Adam and Eve’s sin (Gen. 3); Abraham’s faith (15:6); God’s promise of Messiah (Isa. 9:6); and a future time when God brings Gentiles and Jews to worship in Jerusalem together (Zech. 8:23).

By the time I finished, our 40-minute trip from the airport to our hotel was over. As I thanked Jonathan for a wonderful ride and gave him a hug, he whispered in my ear, “I purposely took the long way here because this was a great conversation.” Though I tipped him well, I saw my brother-in-law give him an additional $20, no doubt grateful for a safe ride.

The apostle Paul said it well: “And we know that all things work together for good to those who love God, to those who are the called according to His purpose” (Rom. 8:28). Only God could have orchestrated these events. I made a foolish mistake, but God turned it into a fantastic experience.

Steve Herzig is the Vice President of North American Ministries and a Bible teacher for The Friends of Israel.

6 thoughts on “How God Turned the Foolish Into Fantastic”