It’s so important to teach the younger generation. Elijah mentored Elisha for almost eight years. Then Elisha made an unusual request.
One of the most difficult aspects of growing older is being able to let go. It seems so easy to hold onto a job or position too long. Instead of holding on, we should diligently seek someone younger to mentor. So when the time comes for us to step down, the work won’t suffer loss.

The apostle Paul instructed his protégé Timothy, “And the things that you have heard from me among many witnesses, commit these to faithful men who will be able to teach others also” (2 Tim. 2:2). This concept of the older teaching the younger runs throughout God’s Word.

In 1955, Dawson Trotman, founder of The Navigators, preached a sermon titled “Born to Reproduce,” where he declared, “Men, where is your man? Women, where is your woman? Where is the one whom you led to Christ and who is now going on with Him?”1

He was teaching the truth of discipleship—the art of mentoring a new believer until he or she is mature in the Lord. That’s exactly what the prophet Elijah was commanded to do. God told him to anoint Hazael as king of Syria, Jehu as king of Israel, “and Elisha the son of Shaphat of Abel Meholah you shall anoint as prophet in your place” (1 Ki. 19:16).

The older prophet found Elisha plowing. “Elijah passed by him and threw his mantle on him,” apparently a sign that Elijah was calling Elisha into the ministry (vv. 19–21). Elijah would disciple, or teach, Elisha exactly what following the God of Israel was all about.

While Elijah’s ministry was fiery as he publicly called out sin and evil, Elisha seems to have had a quieter, more reserved manner, showing us God can use all types of personalities.

The men traveled and ministered together for almost eight years before it became known the Lord would “take up Elijah into heaven by a whirlwind” (2 Ki. 2:1). Elisha was probably distressed by the realization he soon would be separated from his mentor. He no doubt had grown close to Elijah, enjoyed sweet fellowship with him, and learned a great deal about serving the living God.

‘I Will Not Leave You’
On Elijah’s last day on Earth, the prophet told Elisha to remain in Gilgal while he went to Bethel. But Elisha refused: “As the LORD lives, and as your soul lives, I will not leave you!” (v. 2). Why Elijah made the suggestion is not known. Perhaps he was testing Elisha’s faithfulness. Elisha was as good as his word. He remained steadfast and never left the prophet’s side. At Bethel “the sons of the prophets” asked Elisha, “Do you know that the LORD will take away your master from over you today?” Elisha curtly replied, “Yes, I know; keep silent!” (v. 3).

Scripture doesn’t say how they obtained that information, but God obviously had conveyed it to them. After all, He is the One who declares the end from the beginning and “from ancient times things that are not yet done” (Isa. 46:10). This is why we must study Bible prophecy; God is telling us ahead of time what He plans to do in the future. Had He not wanted us to know, He would not have told us.

Then Elijah said again, “Elisha, stay here, please, for the LORD has sent me on to Jericho” (2 Ki. 2:4). Again, Elisha replied, “As the LORD lives, and as your soul lives, I will not leave you!” (v. 4). From Jericho, God dispatched Elijah to the Jordan; and for the third time, Elijah suggested Elisha remain behind. Again, Elisha declined (v. 6).

As they approached the Jordan River, with the prophets in training watching, Elijah “took his mantle [cape], rolled it up, and struck the water; and it was divided this way and that, so that the two of them crossed over on dry ground” (v. 8).

Perhaps the water stood in a heap, as the Red Sea had when Moses held up his staff during the Exodus from Egypt (Ex. 14:13–22), or as the Jordan River had when the Ark of the Covenant entered the midst of the river, carried by the priests under Joshua’s leadership (Josh. 3:14–17). Whatever method God used, the prophets in training were there to witness it because the Lord had given them some type of advance notice—and they believed it.

On the other side of the Jordan, Elijah told his friend, “Ask! What may I do for you, before I am taken away from you?” (2 Ki. 2:9). Elijah knew the time of his departure was near. Clearly, Elisha wanted something from his teacher because he had remained steadfastly at Elijah’s side.

Then Elisha made his request: “Please let a double portion of your spirit be upon me” (v. 9).

The Double Blessing
On the surface, this may seem like an audacious request, but it actually was quite normal. As Elijah’s trainee, Elisha was, in a spiritual sense, his son. Timothy enjoyed a similar relationship with Paul, which is why Paul addressed him as “a true son in the faith” (1 Tim. 1:2) and “a beloved son” (2 Tim. 1:2).

Elisha was Elijah’s spiritual son; and as such, he was requesting the double blessing that would naturally fall to the firstborn male heir of a family.

Elisha was Elijah’s spiritual son; and as such, he was requesting the double blessing that would naturally fall to the firstborn male heir of a family. Moses gave instruction regarding this blessing in Deuteronomy 21:17. Since Elisha had been discipled, trained, and tutored by his spiritual father, Elijah, he was requesting the double portion of the firstborn that would have identified him clearly as Elijah’s heir and separated him from all the other prophets in training.

Knowing such a request could only be fulfilled by God Himself, Elijah told his protégé he had no power or authority to bestow such a blessing. “Nevertheless,” he said, “if you see me when I am taken from you, it shall be for you; but if not, it shall not be so” (2 Ki. 2:10).

Elisha had to stay with Elijah every minute or he could miss the moment of Elijah’s departure. He couldn’t leave to grab a burger and fries, so to speak. He had to be faithful to the bitter end. Isn’t that what God asks of all of us—to be faithful to the end? He doesn’t want us to become sidetracked. He wants us by His side until He calls us home. 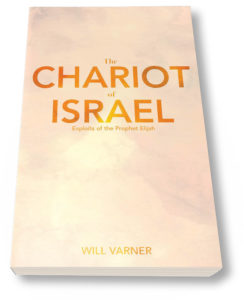 THE CHARIOT OF ISRAEL
For more about the life and legacy of this dynamic messenger of God, check out The Chariot of Israel by Will Varner.

Elisha remained faithful. “Suddenly a chariot of fire appeared with horses of fire, and separated the two of them; and Elijah went up by a whirlwind into heaven” (v. 11). He departed in a moment, miraculously carried into God’s presence by a chariot of fire.

Only one other person ever left this earth without dying: a righteous man named Enoch. The Bible simply states, “And Enoch walked with God; and he was not, for God took him” (Gen. 5:24). These two supernatural departures from Earth to heaven without experiencing physical death beautifully depict what the church is awaiting in the imminent return of Jesus at the Rapture. In the blink of an eye, the dead in Christ will rise; and the living will be caught up with them in the air (Jn. 14:1–3; 1 Th. 4:13–18).

Was Elisha’s request granted? Scripture says the man took his master’s mantle and “struck the water, [and] it was divided this way and that” (v. 14). The Lord divided the Jordan for Elisha exactly as He had for Elijah. With that miracle, a new prophet arose in Israel in Elijah’s place to continue the work of the Lord.

During the eight years these two men were together, the older poured himself into the younger, preparing Elisha for the day when it would become his responsibility to carry on the ministry of the Most High God.

As Dawson Trotman asked, “Men, where is your man? Women, where is your woman?” Today it seems more important than ever that we diligently teach the next generation what it means to be a true follower of the Most High God.

Tom Simcox is the Church Ministries training coordinator and a Bible teacher for The Friends of Israel Gospel Ministry and Word of Life Bible Institute.

7 thoughts on “Passing the Mantle”