Recently I was in Hebron where I met many tourists. They were looking at the graves of our forefathers, but their guide was not giving them the right information about the place. He gave them facts which were not very sympathetic to Israel, and many of the tourists believed him. This was the first time they had been in Israel, and of course they did not doubt what their guide told them about the land. They were in darkness, even with their eyes open. There are many people in the world like this — they have poor guides and they follow after them.

Two of the tourists came up to me and asked if I was from Israel. “Yes, I am,”’ I replied. They then asked if I knew anyone who could speak Swedish. I told them that I could speak Swedish, and they said, “Good, would you please tell us about this place, because we feel that something is not right in what we have heard.”’ I told them, “Not only something, but everything that I heard was not right.” “How do you know this?” they questioned. I answered, “Because it was in this place that God said to Abraham ‘ … Lift up now thine eyes, and look from the place where thou art northward, and southward, and eastward, and westward. For all the land which thou seest, to thee will I. give it, and to thy seed forever. And I will make thy seed as the dust of the earth . . . ‘ [Gen. 13: 14-16]. All of this was spoken right here in Hebron. The Lord promised to us this country.” One of them then asked, “Do you believe in God? “Yes,” I replied. “We do also,” she said, “but we are Christians, not Jews.” I said, “There is one Father, one God, one Holy Spirit.” “You speak like a Christian,” she exclaimed, and she quickly called her friend over saying, “Did you hear what he said? He spoke about the Lord and he is a Jew.” “Why are you so surprised?” I asked. “Don’t you remember that the first apostles were Jews and came from this same nation?” By this time their guide came over to me and said, “What are you doing, trying to take my livelihood away from me?” “Oh, no,” I answered,  “I only want to make things clear to these tourists. You, as a guide, must be fair with God and with these people. You must not tell them stories which are far from the truth. You should know the Bible if you want to be a good guide here in Israel, because this land is a land of the Bible.” “But not Hebron or Shechem,”’ he replied.

I then asked the group of tourists if anyone knew about the Bible, and many of them said they did. I had a Bible with me and read to them Genesis 13:14-17. I then asked who Abraham was. The guide answered, “He was Islamic.” The tourists were not blind and knew that he was wrong. The guide then said, “Let’s go now,” but the Swedish tourists did not leave. They wanted to stay and hear more. The guide was unhappy about this, but he finally agreed, and we all went to a corner where I had a chance to speak to the Swedish tourists, as well as to many Arabs and Jewish people who were passing by and were interested in hearing what I had to say, even though they knew I was speaking about the Lord. I spoke first in Swedish to the tourists, then in Arabic to the Arabs and in Hebrew to the Jews.

Some of them said that only the Jews are the Chosen People. I told them, “This is true, because it is written in Exodus 4:22, ‘. . . Thus saith the Lord, Israel is my son, even my first-born.’ However, God gave His Son to the whole world. Because Romans 3:23 tells us that all people are sinners, we are told that Jesus Christ ‘… gave himself for us that he might redeem us from all iniquity, and purify unto himself a people of his own .. . ‘ [Ti. 2:14]. John 3:16 tells us that God loved the whole world.”

Some of the Jewish people then said, ” Now you are going too far. Before you spoke from the Holy Bible and this was nice, but now you are talking about another subject.” “This is the same subject,” I told them. “The New Testament is a continuation of the Old Testament Scriptures.

This may seem impossible for you, but it is written in Jeremiah 31:31-34.” I then read this passage, beginning where God said, “… I will make a new covenant with the house of Israel … .” At all times I spoke first in Swedish, then in Arabic,  then in Hebrew, giving each group a chance to comment or question.

One of the Jewish people said, “You can speak nice like this because you never had to fight for your country.” He was very surprised when I showed him my Army book and all the distinguished service awards I had earned. I told him, “Even to the present time I go to the army, and my children also. You can see that I believe on the Lord and I also serve my country. It is not as you think, that all who believe on Jesus betray their country. This is your greatest mistake. We who are believers are the only ones who can say we are really Jews, the only ones who can say we are a ‘.’. . holy people unto the Lord thy God; the Lord thy God hath chosen

thee to be a special people unto himself, above all people who are upon the face of the earth’ [Dt. 7:6]. This is because we have turned to Him and have received Him as our Savior, for only in Him can we be saved.”

Some of the people then asked, “How can you speak about Christ in such a holy place as this?” I answered, “I can speak about Him in the most holy of places, because He is holy. Any place where the Lord is not found is not a holy place, even though it may be a fine temple or synagogue. It is the same with our bodies. Without Him we are dead, empty and without value. The Lord has given each of you a choice, to accept or reject His great gift of His Son. Many of you didn’t know about this great gift before, but now you do and the choice is in your hands. What can you do? Ask Him, through prayer, to come into your heart. Even though you never believed on Him before. He will not turn you away. He is the One who loved the world so much that He gave His Son for us all, so that we should not perish but have everlasting life. It makes no difference if you are Swedish, Arab, Jew or any other nationality.”

Some of them asked, “Are you afraid to speak such words?” “Why should I be afraid? I have put my trust in God and He has said, ‘Fear not; for I am with thee. . . ‘ [Isa. 43:5] . I don’t need any more than this. He is with me, and He will also be with you if you will give your hearts to Him. Then your name will be written in the Book of Life.” The Swedish tourists were very happy to hear all of this. The Arabs and Jewish people, though they were not happy, were changed in their attitude. I was surprised that they did not attack me because of my stand for the Lord.

After this, the guide asked me, “Where shall I take the group now?” I replied, “Follow what is written in Psalm 48:12-14, ‘Walk about Zion, and go round about her; number the towers thereof.Mark ye well her bulwarks, consider her palaces, that ye may tell it to the generation following. For this God is our God forever and ever; he will be our guide even unto death.’” He was so happy to hear this that he invited me to his home. It is good to know that visitors and citizens of Israel alike can have the opportunity to hear the Gospel of the Lord Jesus Christ. 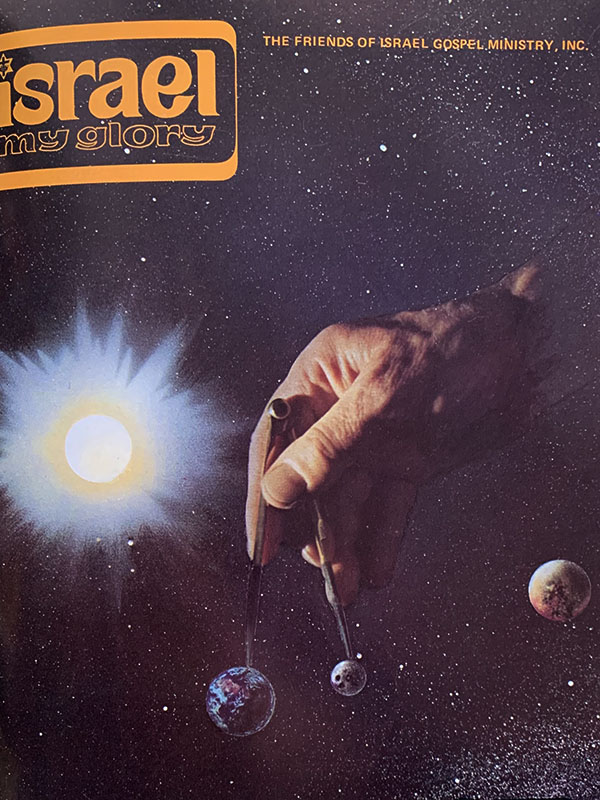