Here in Israel we have a special situation. There is much pressure from the north, south, east, and west. The wind is blowing from every direction, and we are in the center of the storm. As we know, there are many countries on the face of the earth, but there are also many nations that are now lost. These nations were much bigger than Israel, but where are they now? They are forgotten just as if they had never existed, and why is this? It is because they fought against this nation which was chosen by God himself, and this always marks the end for such nations.

Why do the people of the world want to fight against Israel? A tiny country with such a small population does not fight because she wants to. No, she fights because she is constantly being attacked by millions of blood-thirsty people whose only aim is to be finished with the “Israel problem.” But is there any power on earth which can stand against God? No! There never was and there never will be. The Lord, our Savior, knows the hatred of the nations of the world against Israel, and so He watches over us as He has promised.  It is only because of His love for us that we are strong. And what does He want from us? Nothing! He only wants us to open our hearts to Him and say, “Oh Lord, come in.”

I was recently in the army for a few days and was stationed in Samaria. One day as we were passing through the town of Shechem we went into a small restaurant, and inside were several of our “cousins” (Arabs). Of course, they are always happy when they meet Israelis because they have an opportunity to say things against us. None of the other soldiers could speak Arabic, and so I spoke with these men and said, “As long as you continue to follow after the things of darkness, you will remain blind. Even though you have a big power like Russia on your side, this will not help you. You are not strong enough to fight this battle.” “Oh yes, we are very strong,” they said.

Soon more Arabs came in, and they were all so sure of themselves. I said, “You can see how many people you have and how many we have. This should be enough to show you how weak you are. And why is this? It is only because your faith is groundless.” One of them said, “That does not make sense. We have so many people and you have so few.” I answered, “Of course we are small in quantity, but we are great in quality. Your past experiences in the wars we have fought against each other should prove that to you.”

They were all quiet for awhile, and then one of the Arabs asked, “What is your secret?” I replied, “As a soldier I cannot disclose military secrets, but as a believer I can tell you that the secret is to fear God and follow only Him. If you do this, you will no longer think of Israel only with hatred.” Then one of them said, “But we pray five times a day. Is this not enough?” “No,” I answered. “If you pray only once a day but your prayer is sincere from your heart toward God and you pray for love and forgiveness of your sins, then you will change your minds about Israel.” “We pray to Allah and to his prophet, Muhammad. Is this not enough?” they asked. I told them, “There is only one living God, and it is to Him you must pray. We do not pray to our prophets, not even to Moses, because they are no longer alive and they cannot do anything to help us. There is only one God and we must open our hearts to Him. He is merciful and is ready to hear and help us when we pray to Him.”

Every time I go to the army I take my Bible along, because it alone contains the true facts. And so, in this small restaurant I had an opportunity to open the Bible and read, first in Hebrew to the Israeli soldiers, and then translating it into Arabic for our “cousins” to understand also. When the Arabs saw this, they were at first very surprised, but they finally realized that I believe in the Lord Jesus as my Savior. When they understood this, our whole conversation changed, and even the soldiers wanted to know how I had come to believe in the Lord. I began by saying, “You must realize that I was not born a soldier. I was born as all of us were, as a human being, a creature of God. Today I am a soldier, tomorrow I will be a private citizen again. But even as soldiers, we are not made of iron. We need His help, because without Him we can do nothing. It is for this reason that I lift up my eyes to the Lord in Heaven. He has taken my sins to the grave, He has cleansed me through His blood, and in Heaven He has written my name in the Book of Life. It is because I have received Him as my Savior that I can speak to you as friends, even though you hate me. The Lord has taught us to love our enemies and to pray for them.”

Most of these Arabs were Islamic, but two of them were Greek Orthodox, and they asked me a question I have been asked hundreds of times: “If you believe in Jesus, why are you in the army?” I replied, “I assume that in your faith you believe in Jesus Christ and the New Testament.” “Certainly,” they said. I continued, “Then you know what is written in Matthew 22:21 where the Lord said, ‘. . . Render, therefore, unto Caesar the things which are Caesar’s; and unto God the things that are God’s.’ I serve in the army because I am an Israeli citizen, and I serve the Lord because I belong to Him.”

After this we had to leave the restaurant, but I am glad there were so many people there, both Arabs and Israelis, to hear this witness about the Lord, and I can truly say that they were sorry to see me leave. I am happy that I had the opportunity to tell them what the Lord can do for us and how He can make us true friends with no more hatred through Him. 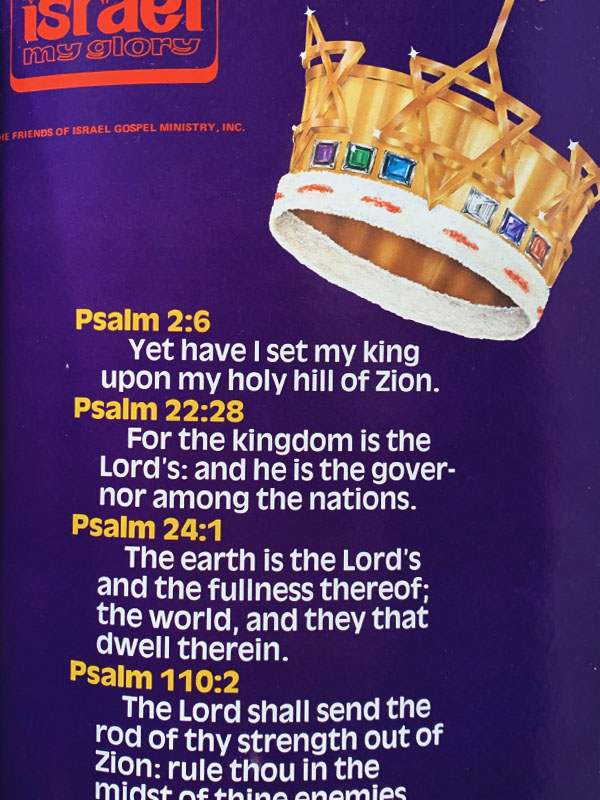