EDITOR’S NOTE: On February 27, Joel of Jerusalem had a heart attack while walking the streets of the Jerusalem he so dearly loves. For days his physical life hung in the balance. God was very gracious. As of this writing, Joel is up and around and on the way to full recovery, God has yet more work for His servant to accomplish.

What a wonderful feeling it is to be one of the Chosen People of God and to live in the Promised Land which He has given to us as His people. But there are many times when I experience a feeling of great and bitter disappointment as I come in contact with people who are so sure that they can teach others how to worship the Lord when they are really false teachers. As one who knows the truth, I never can give up. I must fight to make the truth known among my Jewish brethren so the nations will know that we are truly the Chosen People of God because we proclaim to the world His Word and not our own.

I recently met some ultra-orthodox young men who were preaching their “Oral Law” among a group of new immigrants to the land of Israel – people who knew nothing of the word of God and now the first thing they were hearing was the “Oral Law.” This is very sad, especially among immigrants from Russia, which these people were. I thank the Lord that He has blessed me with a knowledge of the Russian language, so that when I passed among the group and realized what they were discussing, I did not wait for an invitation to participate in the conversation – I just joined right in! The orthodox men (speaking to me in the Russian language) were surprised at my boldness and asked what group I represented.

I told them, “I have been listening to the fictitious stories you have been telling these people who are new to the Promised Land of Israel. All their lives they dreamed of coming here and becoming members of the family of our Father in Heaven. They want to learn from the Bible, which was written by the Holy Spirit of God, not from the writings of those people who, through the centuries, have called themselves holy but who are, in reality, false teachers. I am very disappointed to hear you teaching a false doctrine and a false faith to these innocent people who have not even learned the Hebrew language yet.”

My comments made the orthodox men very angry and, of course, the first question they asked was, “Are you a Jew?” I replied, “You should ask yourselves the same question. You should also search your hearts and ask what you really want these people to believe – the truth or a lie.”

At this point some of the Russian people began to realize that I did not agree with what they were being taught by the orthodox men, and they asked what I believed. I showed them my Bible and said, “This is the book which I believe and in which I have put my faith and trust, and you must do the same thing. You must read it, study it and worship God according to the way He has instructed us in this book, which is His holy Word. You must not believe or follow the fictitious stories which these men have told you.”

Of course, the orthodox men were very unhappy to hear this and asked, “Are you saying that our rabbis are not holy?” “That is exactly what I am saying,” I replied. “For your rabbis to be holy, they would have to do the will of God and not just go through the outward motions of showing themselves to be righteous. Yes, my friends, I know you – I know who you are and what you represent – and because I know you, I will fight against you and against all the other false teachers. If you are so holy, why do you speak with these people about the foolish dreams of mere men, dreams which have been passed down from generation to generation? If you were really holy and were doing the will of God, you would be teaching them from the holy Scriptures which were inspired by the Holy Spirit of God and not by men. The Lord has spoken about people just like you in Jeremiah 23:25-27.”

When I mentioned a specific passage of Scripture, the Russian immigrants became excited and asked what the passage said. I was pleased to see them show some interest and gladly read the passage to them: “I have heard what the prophets said, who prophesy lies in my name, saying, I have dreamed, I have dreamed. How long shall this be in the heart of the prophets that prophesy lies? Yea, they are prophets of the deceit of their own heart, Who think to cause my people to forget my name by their dreams which they tell every man to his neighbor, as their fathers have forgotten my name for Baal.” I also read Matthew 7:15 where the Lord said, “Beware of false prophets, who come to you in sheep’s clothing, but inwardly they are ravening wolves.”

This was no longer a trivial conversation. The Russian immigrants began to act more friendly toward me and started asking some very pointed questions about God and the Scriptures. This was not a welcome development for the orthodox men, and they began to harass me, using some of the diversionary tactics with which they think they can blot out the truth. But this time their tactics did not work. The Russian people, who had come very close to being their scapegoats, realized that these fanatics only wanted to catch them in their nets – they wanted to bring them around to their erroneous way of thinking and gain more support for their false teachers and false doctrines. The Russians clearly understood what I was telling them from the Word of God, and they knew that I was being sincere, not trying to pass on my own ideas or any false teachings. The Lord had softened their hearts, and they seemed to realize that I was telling them what everyone who is created in the image of God must hear – that is, we must all know the truth of the Lord. It is written in Deuteronomy 16:20, “That which is altogether just shalt thou follow, that thou mayest live and inherit the land which the LORD thy God giveth thee.”

I invited the Russian people to my home, and they gladly accepted my invitation, forgetting all about the orthodox men who had been so sure of themselves and of their power over these new immigrants. I also invited the orthodox men to my home, but they refused saying, “We will see you some other time, and then you will not be so happy!” I told them, “Things will be no different then. You will not gain the victory over me because my power is much stronger than you think, although it is not my own power. I am ‘strong in the Lord, and in the power of his might,’ and I have ‘Put on the whole armor of God, that [I] may be able to stand against the wiles of the devil’ [Eph. 6:10-11].”

I praise the Lord that these new Russian immigrants to the Promised Land had the opportunity to hear about the Lord from the Bible, His holy Word. We shared a meal together in my home, and when they left they felt very good about our discussion and what they had learned. Please pray with me that the Lord will continue to work in their lives – that the seed which was planted will be watered and nurtured and that the Lord will give the increase of a rich harvest of souls for His glory among them and their families. 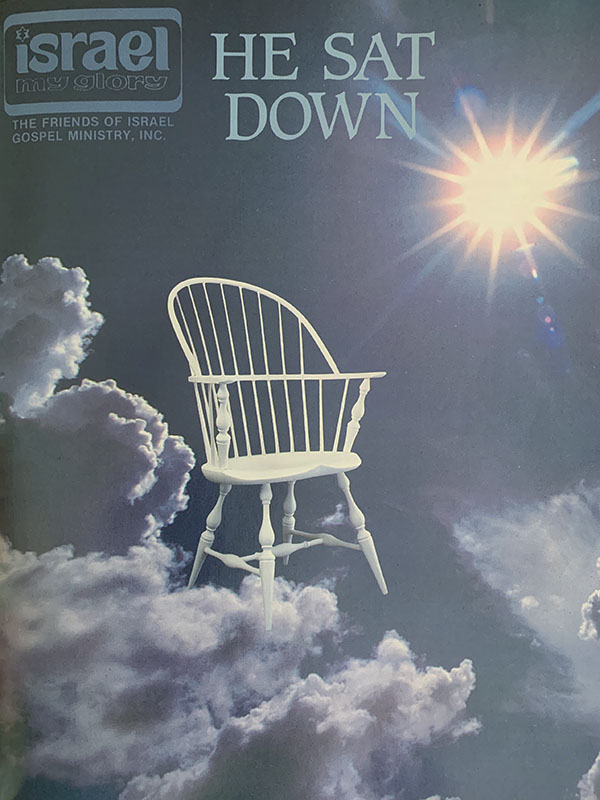