Since my recent heart attack, I have been advised by my doctors to give up my employment as a carpenter and go on permanent disability. Of course, no one wants to become inactive, but I pray this will not be the case with me. I view this as an opportunity for greater service and ministry for the Lord and trust that I will have many more open doors to preach His Word to my fellow Israelis, who are so steeped in religious practices and traditions but do not have the Lord in their hearts.

Since I now have more free time, my wife and I recently went to visit her family, and, like most people in Israel, our method of transportation was a public bus. On the buses of Israel, you can hear almost all the languages which exist in the world, and, of course, everyone has his or her own story to tell. I was sitting quietly, half listening to some of the conversations taking place around me, when I eventually realized that an orthodox Jewish man was staring at me. The look in his eyes told me that he wanted to speak with me, but I could tell he did not have the courage to say what was on his mind, so I began the conversation. I looked directly at him and greeted him with a traditional Yiddish greeting, since I had heard him speaking Yiddish. This made him very happy, and he said, “I wanted to make contact with you, but I did not have the courage, so I am glad you made the first move.” He then went on to say, “I feel a special sense of sympathy for you, and I would like to give you some good advice. Be a good Jew!” “How do you know that I am not a good Jew?” I asked. “Oh, that fact is not hard to tell. You do not have your head covered.” “Why are you saying this to me only?” I asked. “Most of the men in this bus have their heads uncovered. Why don’t you tell them to cover their heads also?”

As I looked around the bus, I recognized some other believers, but they all remained quiet, and I was saddened by their silence. This was a good opportunity to be strong in the Lord and say what He would have a believer say. He has called us, the Jewish people, to preach His gospel to all the nations of the world; however, there are only a handful of people in Israel who even know that gospel, and, of the ones who do, very few are willing to speak to their own countrymen, let alone the rest of the world.

The orthodox man was becoming rather irritated with me, and he started to speak in a loud voice so those around us could hear. I then asked, “If you are such a good Jew, why are you not in the army? Why do you let others go in your place and give their blood for you?” Even though I spoke in a soft voice, some of the people near us heard my remark and agreed with me. Then he countered, “Do you go to the synagogue every day, as a good Jew should?” I replied, “If you prove yourself faithful to God and your country, then you can ask me these questions.”

Now he was beginning to feel very much alone, and he said to the people around us, “Look at me and look at him, then tell me who is a better Jew.” Much to his dismay, most of the people responded that they thought I was the better Jew. I told these listeners, “To be considered a faithful man in the eyes of the Lord, you must do more than pray so that only the people around you can hear. After all, when we are judged, we will stand before God alone to give an account of ourselves, and God will not be impressed if we say, ‘You can ask the people who saw me go to the synagogue every day – they will tell You I was a good Jew.’ No, that is not enough. The Lord gave Himself for us, and He wants us to turn to the right way.”

He then asked, “Why did you say that God gave Himself for us? Where is that written?” The bus was now full, and I prayed silently in my heart, “O Lord, give me the power to stand against all of these wolves.” Then, in a clear, sure voice and speaking in Hebrew, I read Isaiah 53:6, “All we like sheep have gone astray; we have turned every one to his own way, and the LORD hath laid on him the iniquity of us all.” I then said, “There is your answer.” All those who were listening were very quiet because they realized I had answered him from the Bible.

Since we were being delayed due to very heavy traffic, my adversary continued the debate. He said, as many other people have said in the past, “I know that l have not made a mistake. You are not a good Jew.” “If you really believe that,” I responded, “please tell me how you can be so sure.” He replied, “Because you quoted from the 53rd chapter of Isaiah.” “Aha,” I said, “you have just lost your own argument.” I then asked the others on the bus, “Was not the Prophet Isaiah a Jew? Was he not a good prophet and a good Jew?” Many of them answered, “Yes, he was.”

The orthodox man was very downcast and said, almost to himself, “How can this be?” He looked around the bus, trying to decide what to say next. And the answer came to him very quickly. “Only a Christian can speak like you! And so, you see, I was right. You are not a good Jew!”  I responded, “I know that it is often said here in Israel, ‘The best defense is an attack,’ but I say, ‘The best defense is the truth,’ and you will find the truth only when you – all of you – receive the Lord our Savior according to the way He has instructed in the Bible. You must all put your faith in Him and trust Him to save you from your sins. When you all arrive at your homes, please read your own Bibles. I know that if you do this with an open mind and heart, waiting upon the Lord for direction and enlightenment, He will show you the truth. Then you can make your own conclusions. Believe me, you will never find the truth of God by following false teachers. You will only know His truth by following what He has written for us in His Word.”

When we finally arrived at our destination and my wife and I got up to leave the bus, many people thanked me for the very interesting discussion. The orthodox man, however, was not happy and did not even say good-bye. Please pray with me for all of these dear people. I feel that many of them may have accepted my challenge and are searching the Scriptures for themselves. I trust that the Lord will remove the scales from their eyes and show them the truth, thereby leading them to faith in Himself. Pray also for the orthodox man, that the Lord will soften his hardened heart and plant within him a desire to truly know the God of his forefathers, rather than continuing to follow the vain traditions of men and the false trappings of a religion without reality.

Finally, I ask you to pray with me for the others on that bus who were believers but were unwilling to take a stand for the Savior. May they realize that the time is short, and it is our duty to take the message of the gospel to our fellow countrymen who, as Paul said, “have a zeal for God, but not according to knowledge” (Rom. 10:2). May they be willing to say with that great apostle, “’my heart’s desire and prayer to God for Israel is, that they might be saved” (Rom. 10:1). 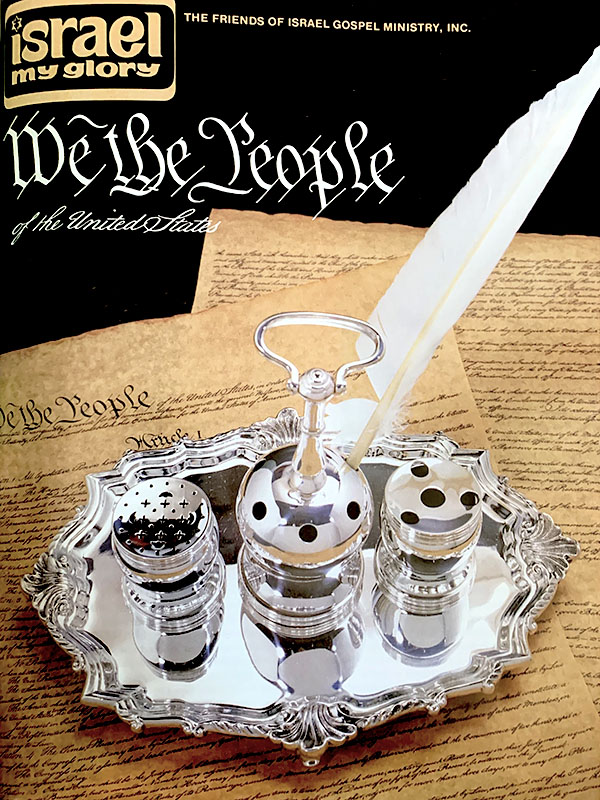