I would like to tell you about our Passover celebration last year. As in every other year, my home was completely full on the Passover evening. Ii was expecting about ten people, but many more than that came. We were thankful that we had room to accommodate all of them and no one had to be sent home.

On this occasion we had more unbelievers, and this was a true blessing from God. Those unbelievers knew where they were, and they were anxious to see the difference between their own celebration and how we, as be­lievers, celebrate the Passover feast. Every­one was seated and before the readings, I gave a short testimony about the meaning of Passover. My children played music through­out the evening, and everyone took part in the singing. The feast lasted until 1:00 a.m., and many of my neighbors, after hearing the music and singing, stood outside listening also.

After the dinner itself came the interesting part. The unbelievers thought they were going to see and hear things completely dif­ferent from their own celebration, but they were surprised to learn that we believe in the same God and, what’s more, we follow the real Passover Lamb, Jesus. And who is He? The Lord himself! Even the blind can know that the blood of animals cannot save. But we have a clear picture of real atonement in LevIticus 17:11: “For the life of the flesh is in the blood; and I have given it to you upon the altar to make an atonement for your souls . . . .”

These people thought that when they came to my house they would see a special Passover with special books — and maybe even swine! But, they were only empty thoughts. What they saw at my home was the Passover feast in its original form. The only difference between their feast and mine was that I put meaning into it, not about the matzo we ate, but about the Pesach Lamb, which is the real atonement. I read from the Bible, so that they could see the more im­portant meaning of the Passover, the resur­rection of Christ as well as His death. I told them that this is what our celebration is all about — the Pesach Lamb and His resur­rection. This was very hard for them to un­derstand. To them it seemed impossible, but we know that with God it is possible even for people such as these to understand and believe.

I read to them only from the Old Testa­ment and only facts about the resurrection, such as Job 19:25: “For I know that my re­deemer liveth, and that he shall stand at the latter day upon the earth.” This was the first time that these dear people had heard about the resurrection. Many of them had heard about the body returning to dust and ashes, but they had never been told how their souls could be kept and how their bodies could rise from the dust and ashes to life everlast­ing — from darkness to light.

Then someone asked the age-old question, “How can we know this when no one has ever come back from the grave?” I replied, “We know that the body is only a cover for the soul, and you can see from the Bible that the Lord rose from the grave.” “No,” the questioner said, “we do not want to hear that example. We want to hear from the Bible, but not from the New Testament.” So I quoted from the prophet Daniel who wrote, “And many of those who sleep in the dust of the earth shall awake, some to ever­lasting life, and some to shame and everlast­ing contempt” (12:2), and King David him­self spoke of resurrection when he said, “For thou wilt not leave my soul in sheol, neither wilt thou permit thine Holy One to see cor­ruption” (Ps. 16:10). “God does not want men to heap vengeance upon others as you have done to me, because of my faith in Messiah Jesus.The Bible says,’. . . thou shalt love thy neighbor as thyself . . ‘ (Lev. 19:18).” “Yes, we believe this,” he said, “be­cause it is from the real Bible. There is nothing like this in the New Testament.”

This gave me a good opportunity to get into the New Testament and show them the same words in Matthew 19:19 and again in Matthew 22:39. Then I directed them to more important passages about this love, such as Galatians 5:14: “For all the law is ful­filled in one word. even in this: Thou shalt love thy neighbor as thyself.” I told them that the main theme of the New Testament is love and what God has done for us be­cause of His love for us, which is best shown in John 3:16. I also pointed out Romans 12: 17-21, which tells us we are to love even our enemies.

This was a great privilege for me, after such a long time of being avoided and criti­cized by these people, to be able to read to them for several hours from the Bible. I then took them back to the Old Testament and showed them again that those who do what the Lord says will have a part in Heaven, even though they may die, as it is written in the book of Daniel: “And many of those who sleep in the dust of the earth shall awake, some to everlasting life, and some to shame and everlasting contempt” (Dan. 12:2).

I then told them, “The choice is ours to make. The Lord has given us a free choice, and I am sure that no one wants to die but that all people want to live. The problem is that they do not know what to do to save their souls. It is clearly written in the Bible how to have life, as I read to you before from Ezekiel 18:32, ‘. . . saith the Lord God . . . turn yourselves, and live.’  Do not be blind to this truth anymore. You can have the Lord’s mercy. You can have real atonement through His death and His resurrection.”

This was difficult for them to understand. How can it be that God was born, that He died and is coming again? But, I told them that these things are all written in the Bible. His birth is foretold in Micah 5:2 and Isaiah 9:6; His suffering is mentioned in Isaiah 53; His death is told of in Zechariah 12:10; His resurrection is prophesied by King David in Psalm 16:10; and His second coming is predicted in Daniel 7:13. I was able to show them all of these things without once open­ing the New Testament, because God has given us a very clear picture of the Lord, our Savior and our Passover, in the Old Testa­ment.

I then told my visitors, “You can see that the way we have celebrated the Passover to­day is not taken from our imaginations, but from the Holy Bible, the same Bible you read. The Lord has promised that He will come again, and He has told us to watch and pray so that we will be ready for that com­ing. And His promises are not like our prom­ises. In Him we can be sure.”

By the end of the evening, I could see that some of my guests had changed their minds about me, and we all sang together the popular song of the Passover taken from Psalm 118:21-29. It was truly a blessed Passover feast. 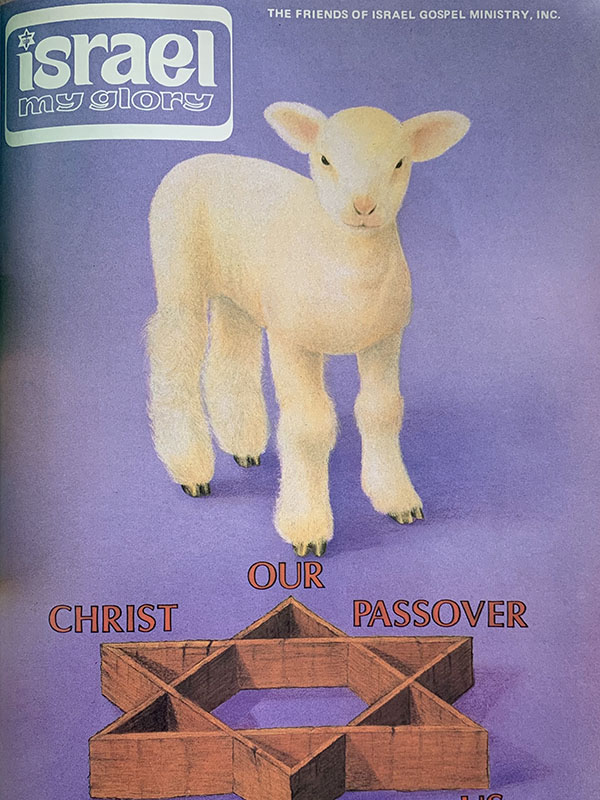