It seems that there is always something new coming upon the scene, and in Israel our something new is a new holy one. He is a rabbi whose father, a very famous rabbi him­self died about a year ago. Now the son has taken his place, and the father’s followers have declared the son to be holy. Near the grave of the father they have built a $400,000 home for the son because he is so holy, and he recently told a group of 200,000 people gathered at his father’s grave, “My father is not dead, but he went away because of the will of his people, to bring back the Messiah whom they now need.” On that occasion there was great rejoicing and much eating and drinking. It was very similar to the festival held each year at the grave of a famous rabbi in Safad.

And what do I think about all of this? I think how blind these people are to obey such fanaticism. We can see the folly of it right here in our own part of the world. The people in Iran were not satisfied with their old leader­ ship. They wanted a new leader, and so they brought in Khomeini and revered him as their holy one. But look at what he has done to that country and to their  relations with other countries of the world. It is just as it was in the days of Solomon’s son Rehoboam who said, “…whereas my father did burden you with a heavy yoke, I will add to your yoke; my father hath  chastised  you with  whips,  but  I will chastise you with scorpions” (1 Ki. 12:11).

The people in Israel are facing a similar choice today, and it appears that they are choosing to follow this new rabbi. However, they do not like to think about the fact that two of his cousins have spent time in prison, and even the rabbi himself is not so clean. Therefore, I, as a be­liever in the truth, have a responsibility to warn the people of the dan­ger in what they are doing. These are not the things which they should tell in the ears of their sons and their sons’ sons. There are other things which they must be told, and they must know to whom they should listen. Of course, hearing is not to be compared with seeing, and people do not think clearly when they are looking upon such a great fantasy as this rabbi displayed before their eyes. Such a picture they cannot see every day. And with all of this, they continue to insist that they are the chosen people, but I must ask myself if we really are the chosen people of God. lf we are, then in whom should we believe? Should we put our trust in holy ones such as this new rabbi and in others who will inevitably follow him? Can we count on such ones to commend our spirits to God when we die?

I asked these questions of some people who returned from the big festival, and one man replied, “Oh yes, we should believe in him and put our trust in him, because he has very great power from God. Many people who were sick are now healthy after receiving blessings from him.” “Where are these people?” I asked. “I would like to speak with them.” He said, “I don’t know where they are, but many people at the festival told us about these healings.” “And you have believed them?” I asked, to which he responded, “Why not? When so many others believe, why should I not also accept this rabbi’s miracles?”

I felt deep sorrow in the presence of these people who had returned home from the festival with such joy. They do not realize how far they have fallen, and all because of this man’s “miracles and wonders.”  It is easy to see the truth of the Lord’s words, “Hear, O heavens, and give ear, O earth; for the Lord hath spoken: I have nourished and brought up children, and they have rebelled against me” (Isa.1:2) This is a living picture of what we are now seeing. What the Lord said while hanging on the cross can be applied to so many areas of our lives, “…they know not what they do…” (Lk. 23:24). Someone must put a stop to these false beliefs, and the way to do this is not by having great feasts with much drinking. The only way to make these people see their error and turn to the right was is through the Spirit of the Lord, through His love, and much patience. And we must do it now! We cannot wait because, as we often say, it is too late to lock the stable door after the horse has been stolen.

Where I am now working there are many people who believe the stories being told by those returning from the great festival, and this presented a perfect occasion for me to tell them the truth, although it came as quite a surprise to them. I told them that they should stay away from false teachings, and I read for them a good example of this in Jeremiah 5:30-31, “An appalling and horrible thing is committed in the land: The prophets prophesy falsely, and the priests bear rule by their means, and my people love to have it so; and what will ye do in the end of it all?” This is the most important question facing such people, and it is because there is no fear of God, but instead they fear these false teachers, these ones whom they think are holy.

After a long discussion at work, someone finally said, “Why do you hate the rabbis?” I replied, “I do not hate anyone, even those who hate me. But we must know who created us and to whom we belong. We must know who is capable of saving us. Please think about this.” Then they began to ask many questions, but one particular question kept coming up over and over, “Why do you not believe that the rabbis can perform miracles?” I answered, “Because I believe in the living God and not in these ones who call themselves holy.” Then one of my co-workers asked, “Do you think your Jesus was holy? Was He greater than our rabbis?” I said, “Now that you have brought up that point, let me make it clear to you who Jesus was and why He is holy. You can read the Bible for the rest of your life, and you will not find even the smallest word about your rabbis. But if you want to know about Jesus, you can open to almost any place in the Bible, and you will find living facts about who He is and what He has done for you, for me and for all the people of the world. Reading about the Lord Jesus makes me very happy, and because I am happy I must come to those who do not know Him. As it is written, and as your great rabbi said, “…tell in the ears of they son, and of thy son’s son…,” but it is the truth of God’s Word which must be told, and this is what I want to share with you. Even though this new rabbi and many others like him say they are holy, we must not believe them.”

One of the men then said, “Jesus also said that he was holy.” I told them, “Jesus could say that because He was holy and because His coming was in accordance with the prophecies about the Messiah written in the Old Testament. We can read about Him in Isaiah 7:14; Micah 5:2; Zechariah 9:9; Isaiah 53 and many other places. These prophecies all relate to the Lord Jesus. Believe me, your new rabbi cannot save anyone, but he can cause you to be lost. Now is the time to open your eyes and see the truth which is in our Lord Jesus Christ alone. The prophets wrote about Him, through the power of the Holy Spirit, and you can read this in the Bible. The only place where you can read about your holy rabbi is in the newspaper. And in a few years, you will read about him no more, but what is written about the Lord Jesus in the Bible has been with us for thousands of years, and it will continue to be with us until the end of this age. That is the difference between the holiness of your rabbis and the holiness of Jesus Christ.”

Please pray with me that these people will truly open their eyes to the truth about this false teacher, and that they will see for themselves the wonderful truth about the Lord Jesus, as it is written, “…ye shall know the truth, and the truth shall make you free” (Jn. 8:32). 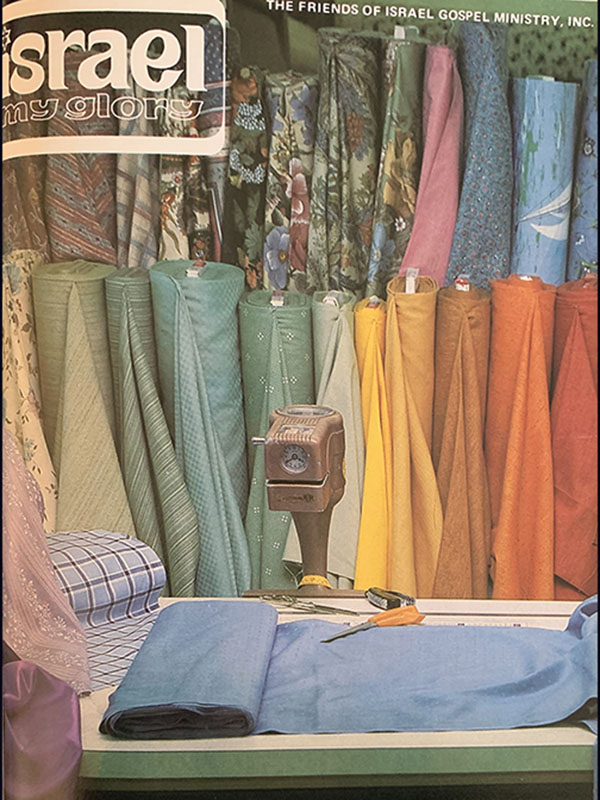