I was recently asked to visit an elderly man whose son is my friend. When I arrived at his home, I could immediately tell that he was very sick and that I had arrived in the last hours of his life. He had refused to talk to anyone, even his children, but when I arrived he seemed happy, even though I am sure he knew that this would be his last day on this earth.

He told me that he had been a drunk all of his life and now the end had come for him. He said, “Now that I have reached the end of my life, I realize that I have never known satisfaction – not from things, not from people, not even from my children. And now I will be lost forever, and it will be just as if I had never been alive on this earth.” He then went on to say, “I know with whom I am speaking. I know that you do not believe as I do, but it is written in the Talmud, ‘A man does not lie on his deathbed.’ I know that it is my own fault that I will be forever lost, because I have been very bad and drank far too much. I never thought about my family – the bottle was the most important thing in my life. And now I am sure that even God himself will not hear my voice if I call upon Him.”

I told him, “No, my dear friend, that is not so. As we always say, every cloud has a silver lining, and you can truly have a silver lining because even now, in the last moments of your life, you can be saved.” “What did you say?” he asked. “Can I be saved after everything I have done in my life?” “Yes,” I answered. “The Lord, our Savior, is so good that He came and gave Himself for us all, so that we never have to die but can live forever. We can have everlasting  life.”

He closed his eyes and became so quiet that I thought perhaps he had died; but no, he was just thinking. When he opened his eyes he told me that he was very interested in what I had said. He asked who had told me these things and if it were really true. “If it is true,” he said, “then there is hope for me to be saved, even after the terrible life I have led.’ I told him that everything I had said was indeed true, and just to reassure him I read Isaiah 53:6, “All we like sheep have gone astray; we have turned every one to his own way, and the Lord hath laid on him the iniquity of us all.” I then said, “This passage, from our own Scriptures, is meant for each one who comes to the Lord, even if that happens at the very end of a person’s life. God is good, and anyone who comes to Him in the name of our Savior, Yeshua Hamashiah, can be sure that he will not be lost. All you need to do is put your trust in Him. This is also written in John 3:16, ‘For God so loved the world, that he gave his only begotten Son, that whosoever believeth in him should not perish, but have everlasting life.’ ”

I was so surprised to see this man, who was lying on his deathbed, become so peaceful and quiet. When his son came into the room, he could not believe what he saw and he asked, “What have you done to my father that he is so quiet and says he is happy?” I said, You must ask your father.” When he did so, his father related to him everything he had heard and said he believed it. The son was not pleased by this and asked, “How could you do this to my father at such a time as this?” I told him, “It is my duty, and the duty of everyone who believes in the Lord as his Savior, to come to other people in their time of need and help them see the truth. Otherwise, they will be lost, as your father was. We are responsible for each other.”

“How can you be responsible for my father?” he asked. “You are not a member of this family.” I replied, “We have one Father in Heaven, and we are one family in Him. And as members of His family, we have a responsibility to one another. This is made very clear in Ezekiel 33:7-8, where it is written, ‘So thou, O son of man, I have set thee a watch man unto the house of Israel; therefore, thou shalt hear the word at my mouth, and warn them from me. When I say unto the wicked, O wicked man, thou shalt surely die; if thou dost not speak to warn the wicked from his way, that wicked man shall die i n his iniquity, but his blood will I require at thine hand.’ Do you think it is against the law for me to speak as I did to your father? Why, just look at him now. There is no fear in his face, even though he knows this may very well be his last day in this life.  He has received very great courage to do that which the Lord requires of us, and I think you can tell by looking at his face that the Lord has given him peace by receiving him through His providence. Are you against your father having such peace in his last hours?”

“No,” the son replied, “but I am against you because you spoke with my father about a faith which he never heard about all through his life.” “That is just the point,” I said. “Even though he had not heard before how to have true faith in the Lord, the Lord is still willing to receive him, and your father is happy because he knows that he is no longer lost. He is now saved and, therefore, you can see that he is happy and peaceful in the last moments of his life. This can be a great example for your family. You will all have to stand before the Lord one day, just as your father will do very soon. He was very embittered and melancholy because of the problems alcohol had caused in his life. He told me that he has never been happy in his entire life. But now, at the very end of his life, he has found happiness and has peace in his heart because, for the first time, he has heard the truth about the Lord Jesus Christ and has gladly received what he heard. He is not drunk now, his mind is very clear, and he is happy in the Lord. Now you and the rest of your family can come into his room and share his last moments with him in happiness.”

This was for me a very thrilling day, but it was also a very sad day. It was thrilling because this man accepted the Lord as his Savior, and he will spend eternity with Him in Heaven. It was a sad day because I know that even though his family was happy that their father had found peace in the last hours of his life, they have not accepted for themselves the Savior who gave such peace to their father. Please pray with me that they will think about what happened to their father and that they will accept Him soon, before they reach their deathbeds in a lost and hopeless condition.

Joel is a faithful witness for his God in the land of Israel. A survivor of the Holocaust, he found Jesus Christ as his Savior following Israel’s 1948 War of Independence. He served in the Israeli army with distinction through all of her modern conflicts. Of far greater importance, he serves in the lord’s army. Joel’s amazing life can be read in his biography entitled “ZVI” which is available at $3.95 through The Friends of Israel. 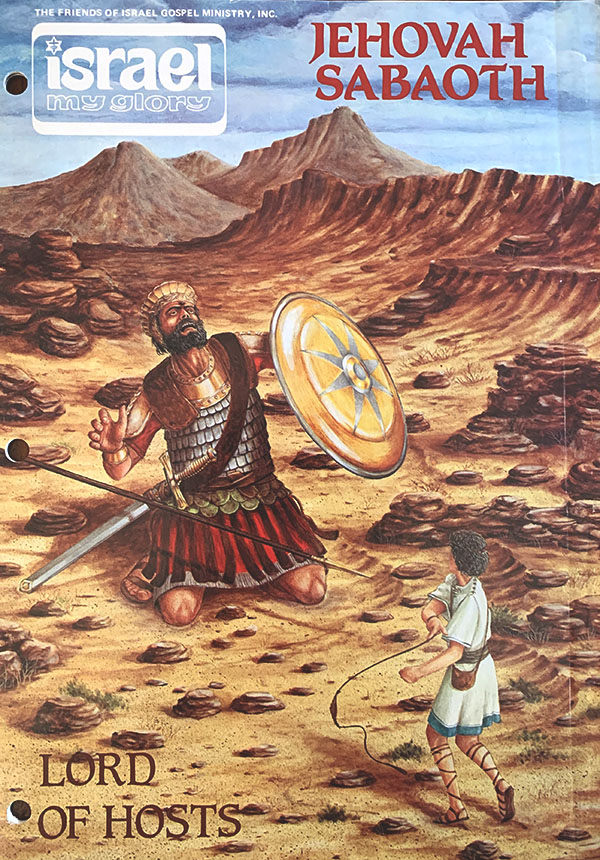