I have many friends here in Jerusalem. Some of them are believers, while others are far away from the Lord, but since I have established contact with them, I feel it is important to maintain that contact. Most of these people I know from the army, but some I met at the many places where I have worked, because I change places of employment so often. This is not because I will it to be so, but because I believe in the Lord. Of course, I realize that I, as a believer, must give thanks for all things, good or bad, because the Lord always knows what He is doing and what He wants. I must admit, though, that sometimes I ask myself, Why have they sent me away from this place, after all, I am a hard worker. But I always receive the answer from the Lord, even though I sometimes forget.

I had worked at one place for a rather long time, and the other workers treated me badly because I believe in the Lord Jesus. Of course, I could not be quiet, and I told them what the Lord had done for me and what He could do for everyone who will receive Him as Savior and Lord. When I gave my testimony to these men, they seemed as if they were ready to kill me.

I was very surprised, therefore, when one of them who had hated me so much called at my home recently and gave my wife an invitation (since I was not at home at the time). On the invitation it was written, You will see something you have never seen before, and you will never forget what you saw.” When I arrived at home, my wife gave me the invitation, and I was very curious to see this thing which I would never forget.

That evening my wife and I went to the appointed place. There were many people there, and I asked myself, What can be happening here? Ninety-five percent of the people were from Mea She’arim, the ultra-Orthodox section of Jerusalem. Everything was so strange that it wasn’t long before I asked someone what was going on. He said, “What? Don’t you know?”  “No,” I replied. He then said, “Come with me, I want to speak to you. Here is an empty room where we can talk.” He then called some of his friends from Mea She’arim to come into the room with us. My wife warned me to be careful and to trust in the Lord.

I then went into the room, and the man said to me, “My friend, we are having a celebration, a very special evening. One who was lost has been brought back to the faith again. We were working on him for a long time, and when he comes here to the hall, you will see for yourself the great hero of today, and perhaps even of tomorrow! Just then, the great hero entered the hall. He came into the hall with great confidence, and everyone began clapping their hands. When I asked why everyone was applauding this young man, the man who had been speaking to me asked, “Couldn’t you see for yourself?” “No,” I replied. He then said, “We are going to make you the way he is. He used to be as you are — he had left Judaism — but just look at him now! He has a beard and curls. What more could you want?”  I told him, “You can see this every year at the annual Purim carnival when people disguise themselves as someone else, but it is a surprise for me to see such a thing after the time of the carnival.” “What? Are you not ashamed to say this?” the man asked. “Why should I be?” I responded.

Then he said, “Be quiet! The guest of honor wants to say something. Shh! Shh!” The guest of honor spoke only a few words. “Do you see me?” he asked. “Yes! Yes!” everyone answered. “Are you happy?” he asked. “Yes!” they all replied. “I am also,” he told them, “because I have changed. You can see my beard and curls. I am like you again.” This was all he said, and everyone clapped enthusiastically. Then the great hero began to eat and drink, and all the people came up to him one by one and congratulated and praised him.

Finally it was my turn to greet him, and when he saw me he said, “Do you recognize me? We worked together for awhile. And now you can see that I have changed from when you knew me.

Now I can truly say that I am a Jew.” I told him, “I can see your beard and your curls, but they do not cover your sin. Your heart is as hard as stone, You think that it is important to wear a mask on the outside”. “Don’t say that!” he warned in a whisper. “You are not at work now, where you can feel free to speak as you always do. This is a special occasion, and I have invited you here so that you can see what has happened to me, and hopefully the same thing will happen to you.” I said, “You may see me dressed like that during Purim. But if you really want to turn to God, a beard and curls will not help. Nor will a big celebration like this one tonight make you right before God. The only thing that will help you come close to God is to do as the Lord said, ‘… come, take up the cross, and follow me’ [Mk. 10:21]. “

At this, the young man became very agitated and said, “Please don’t say things like that, because these people can kill you right here!” Some of the guests were looking at us and realized that something was happening, and so they asked the “great hero,” “What is he speaking about to you that has made you so afraid?” “I don’t know, you ask him,” he responded. Then one of the men asked me, “Do you have something to say?”

“Yes,” I replied, “I want to ask if changing a man’s clothes and growing a beard and curls means that his sins are forgiven.” “No,” the man admitted, “but there is something good to it.” “In what way?” I asked. “Because it shows that we are different from other people,” he replied. “You can see this by our clothes, by our modest way of living, and by the fact that we make no special requests of anyone and follow closely after what is written in our Talmud.” “Do you know what I think about all of this?” I asked. “I think that you are like wolves in sheep’s clothing.” “How can you say that?” he asked, and I replied, “Because what you look like on the outside cannot change what you are on the inside. You cannot be right before a holy God simply by changing your clothes and growing a beard and curls. You can only be changed by the Lord, who alone can change the heart.” “ Are you crazy? How can you change a heart?” they wanted to know. I told them, “Your trouble is that you have accepted the Talmud as a holy book. I challenge you to read the Holy Scriptures, Look at Ezekiel 36:24-27 and 18;31-32. In these Scriptures we are not told to change our clothes, but rather, ‘Cast away from you all your transgressions, by which ye have transgressed, and make yourselves a new heart and a new spirit; for why will ye die, O house of Israel?’ [Ezek. 18:31].”

After this they were all quiet for awhile, and then one of them said, “You are right, but what can we do now? How can you stop the flywheel in the middle of the run?” “ You can do it in the same way as many others have done.” Then one of the men said, “Oh that someone would remove the dust from my eyes!” I said to him, “God has said, ‘Come now, and let us reason together, saith the Lord: though your sins be as scarlet, they shall be as white as snow; though they be red like crimson, they shall be as wool’ [Isa. 1:18]. God has revealed Himself in the Bible, and in His Word we can find how to have forgiveness of sin and life everlasting.”

I had been invited to this occasion by treacherous men who wanted to trap me, but in the end the Spirit of God began to work in their lives. Perhaps the seed that was planted wilt one day grow into life everlasting. 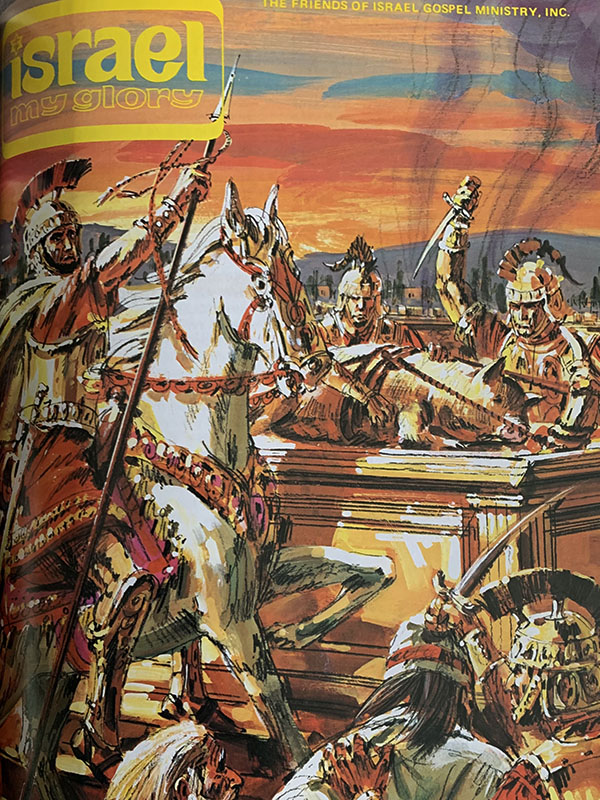