Many of you I do not know personally, but we are all one family in the Lord, and I experienced this family-type closeness and concern very recently. As many of you may already know, I suffered a very serious heart attack on February 27th as I was walking along the street in Jerusalem. I was rushed unconscious to the hospital, where I remained unconscious for over 24 hours. The doctors told my family that I was clinically dead and that there was no hope for my recovery. Further, they said that if I did survive (which they doubted), I would be helpless and useless and my memory would be gone.

Of course, my wife and children were very worried, but they did not lose hope. They put their trust in the Lord and began to pray. They also notified many of our brothers and sisters in the Lord, and believers in Israel, the United States and many other countries of the world began to pray for me. They were all one family united in believing prayer before our Lord and Savior, and He was pleased to honor their faith. After three days, I was so greatly improved that all life-support equipment was disconnected, and in another week I was discharged from the hospital.

I realize that I was very close to my everlasting home, but I can truly say that I was at peace because I knew where I would be if my earthly life ended. This was not the first time I had faced death, having been in many dangerous and life-threatening situations during the Holocaust in Europe and in the wars here in Israel. They say that a cat has nine lives, but I am sure that if I were in competition with a cat, he would lose! But I am happy that I am always ready to say, along with our Lord Jesus, “Father, into thy hands I commend my spirit” (Lk. 23:46). I am always ready to meet my God. The Lord has said, “be thou faithful unto death, and I will give thee a crown of life” (Rev. 2:10b). We also read in Amos 4:12, “prepare to meet thy God.” I truly thank the Lord that at a time when I was very close to death, I was prepared to meet Him. I had someone to whom I could open my heart, someone I knew would welcome me to my eternal home.

I was surprised and gratified by the many people, some of whom I had never met, who came to the hospital and said to my family and me, “Do not worry; everything will be fine. We are praying for you, and we are sure the Lord will answer our prayers.” I know that everything which was accomplished on my behalf was through the faith of my dear family and my many, many brothers and sisters in the Lord, both in Israel and around the world. I am so grateful to Him and to all of you for your love and concern for me. It is written, “without faith it is impossible to please him” (Heb. 11:6). I praise the Lord for the faith of my family and friends and for His power which worked a miracle in my life.

While I was in the hospital, I shared a room with a man who was 80 years of age, and he too had many visitors. Most of them spoke German, but one man asked me in Hebrew, “What is your position?” “Why do you ask that?” I inquired. “Surely you must know that when we get to our everlasting home, no one will ask what position we held on earth. We will not be judged according to our standing in society.” He then asked, “What type of work do you do?” “I am a carpenter,” I replied. When he heard this, he made a very sour face and asked the other visitors in German, “Do you think it is possible to change rooms?”

Of course, I understood what he said, and I responded in German, “You are free to do whatever you like, but you should realize that it is not possible to make a contract with God assuring that you will always be in high society. God is no respecter of persons. He does not care if you are rich or poor. Everyone will have to stand before Him in judgment, and we will each stand alone.”

The old gentleman in the bed next to me seemed very happy to hear what I was saying, but his family was not quite so happy. One of them asked if I had graduated from a university or other secondary school and many other similar questions. I told him, “It is written in Psalm 111:10, ‘The fear of the LORD is the beginning of wisdom,’ but this wisdom is very far from you.” They did not know how to respond to this, and this was difficult for them to accept since they were all university graduates and I was a mere carpenter. They then began to question me in another direction. “Do you read books or special literature, such as Shakespeare?” I replied,”I know that Shakespeare wrote, ‘To be, or not to be, that is the question.’ But the only true question is, ‘To be,’ and you will not find the answer in Shakespeare. For the answers to the questions of life and death, you must look in the book which will impart to you the wisdom of God. The nation of Israel was divinely intended to be an example to the other nations of the world; but, sadly, we read many times in the book to which I referred that we are not fulfilling our divine obligation. For instance, it is written, ‘Wherefore should the nations say, Where is now their [Israel’s] God?’ [Ps. 115:2]. And again, ‘Why should they say among the people, Where is their God?’ [Joel 2:17]. We are the chosen people of God, and yet, as a nation, we spend most of our time pursuing emptiness. You have been trying to show me your great honor and position in society, but this book also has something to say about people like yourselves: ‘For when he dieth he shall carry nothing away; his glory shall not descend after him’ [Ps.49:17].”

They had become very interested in what I was saying, and after a very long time in conversation they asked, “Can you show us this book so that we will know from where you have read all of this?” I now faced a very hard decision. The hospital was a very religious, orthodox institution, and I knew it would be upsetting for these people to see the New Testament here, of all places. I silently prayed, “Oh Lord, open their blind eyes so that they can see the truth.” It was now 1:00 a.m., and we still had not finished our discussion. They were so very interested to know more, but they never expected that in this hospital, this veritable holy of holies, they would see the New Testament. As soon as I showed it to them, they all said, “You are a Christian!” “I am a better Jew than any of you,” I replied. “But you have brought a Christian book into this religious place,” they protested. “When the rabbi comes tomorrow, we will tell him that you want to make us Christians.”

I responded, “You are free to tell the rabbi whatever you like, but you should remind him that he spends most of his time reading the Bible, and the New Testament is a very important part of the Bible. You can see the close relationship between the Old and New Testaments by comparing just a few passages. For example, we read in Isaiah 40:3, ‘The voice of him that crieth in the wilderness, Prepare ye the way of the LORD, make straight in the desert a highway for our God.’ And now listen to what the New Testament says in Mark 1:2-3: ‘Behold, I send my messenger before thy face, who shall prepare thy way before thee. The voice of one crying in the wilderness, Prepare ye the way of the Lord, make his paths straight.’ This is in perfect accord with the Old Testament, and I pray you will ask your rabbi about it when he comes tomorrow.

“Your rabbi teaches you the old stories which were written through the centuries by other rabbis telling of the great things which they did in their lives, but you have seen the truth from God’s Word. Now you must choose between the truth of God and the traditions the rabbis tell you. The Word of God exhorts us to be examples to the other nations of the world, and, as you know, many people from all around the world come to Israel to see for themselves the chosen people of God. And what do they see? They see the same ‘stiff-necked people’ which Israel has always been. Tell this to your rabbi when he comes in for a visit tomorrow.”

I believe strongly in Paul’s words to the believers in Rome: “And we know that all things work together for good to them that love God, to them who are the called according to his purpose” (Rom. 8:28). As a result of my heart attack, I was given opportunity to witness to doctors, nurses, patients, yes, and even the rabbi in the midst of the orthodox Jewish hospital. Some were disinterested; others said, “We will discuss these things with you again.” The seed of the Word was planted in hearts, and now I pray that it will take root, grow and bear eternal fruit. 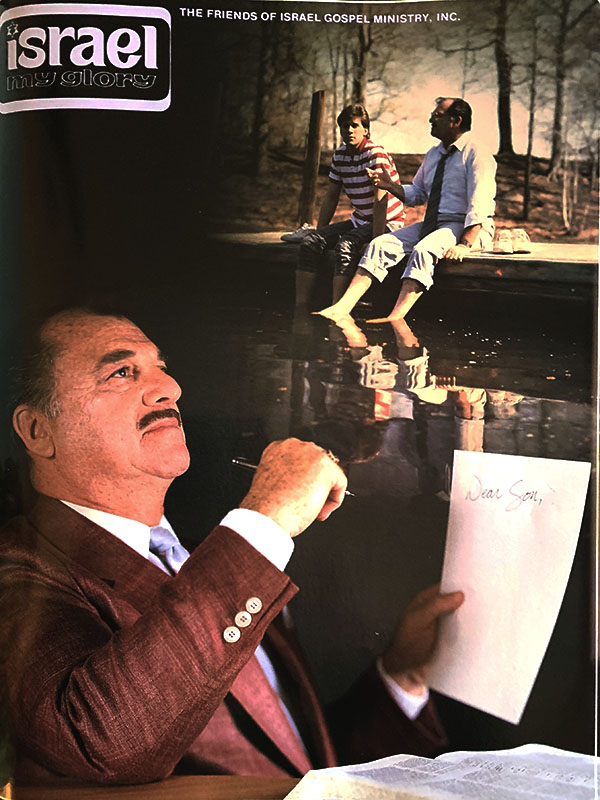