As we all know, we are living in very in­teresting times, and here in Israel people are beginning to be interested in things which before they never thought about. The Jewish people have always followed after the faith of their fathers. They never questioned whether it was the true faith or a false faith. They blindly followed all the old traditions just like sheep being led astray. They believed all that the rabbis taught and considered those teachings to be holy. The fathers taught these things to their sons, and the sons to their sons. And because of this, multitudes of people were living in darkness. But, as it is written, “The people that walked in darkness have seen a great light. . .” (Isa. 9:2). Now I can begin to see some changes taking place. Many people have received the courage to go to their fathers and say, “We want to know the truth. We are no  longer small children. Where is it written that we must spend most of our lives studying the old stories which the rabbis wrote? Where is it written that if we read all those stories, the heavens will be open before us? Is this the true faith? Is our faith so poor that we must trust in the writings of all those false teachers and only through their stories can we be saved?”

Also, the fathers have always been proud to relate to their sons the wisdom of Mordecai and Esther when the Jews were in peril in the land of Persia. They say that it was only through their wisdom and strength that the people were saved, and because the name of God is not mentioned in the Book of Esther, the people do not believe that He had anything to do with saving the people. For those of us who know the Lord, it is our duty to go to these people and tell them who really saved the Jewish people from destruction. I recently told some people, “We know the miracle the Lord performed in Persia. We also know that Haman, the Agagite, was from that nation which was most hated by the Lord, the Amalekites, as it is written in Exodus 17:14, ‘And the Lord said unto Moses, Write this for a memorial in a book, and rehearse it in the ears of Joshua; for I will utterly put out the remembrance of Amalek from under heaven.’ We can see very clearly that judgment was pronounced against this race of people long before the time of Esther and Mordecai, and so Haman was under condemnation of death before he was born [see Num. 24:7; 1 Sam. 15:8]. It was not the wisdom of Esther and Mordecai that saved the Jewish people, but the Lord, who used them to accomplish His will. Moses, that great servant of the Lord, did not do anything through his own wisdom or strength, but through the leading and direction of the Holy Spirit. The same is true of Isaiah, Ezekiel, Jeremiah, Jonah and all the other prophets.

They did not have a university education. They could only accomplish the things they did through the Lord’s enablement.”

I then told these people, “You have believed a very great mistake, and you should tell this to your fathers. I have not had a university education. Why, I did not even finish elementary school. When I preach the Word of God to you, it is not by my own wisdom but through the leading of the Holy Spirit, by faith in the Lord Jesus Christ. I know that you have all completed many more years of schooling than I have, but without the Holy Spirit you are useless, empty.”

When I hear people relate these old stories, and tell of the many times the Jewish people have been delivered and yet not even one word of praise is given to the Lord, I can have no rest until I make the truth clear to them. Then they can go to their lathers and say, “Enough with all those fictitious stories! We have to know the truth, and that we cannot learn from your many books but from one book, the Bible.” Alter all, we are not living hundreds of years ago when the fathers ruled their children with absolute power, and what they believed the children were forced to believe also, whether it was good or bad. They were following the teachings of false teachers and not what is written in the Bible. The Lord has given us the freedom of knowing Him, and not because He forces us to but because of His great love for us. Through the Lord Jesus we can be saved and not lost. This is a new generation. They have seen so many stumble and fall because they followed the traditions of their fathers. From these lessons they must learn, and many of them are beginning to do so. They are going to their lathers and telling them they have had enough. They have heard all the old stories, but now they want to know the truth. They ask how long they must be like Jeremiah and “weep in secret” (J er. 13:17).

There are, of course, many people who do not have the courage to go openly to their families and tell them they want to know the truth which has been hidden from them for so long. Such action would cause very big fights within the families, and they fear losing their families and friends and having their names written on a blacklist. I told them,  “My friends, as much as you love your parents, they cannot give you what you can receive from the Everlasting Father.” They were interested to know what this was, and I said, “Only God our Father can give us eternal life. Then there will be no more weeping in secret but victorious joy.”

Some of these people know that I believe in the Lord Jesus as my Savior, and so they said, “Now you speak like a Christian. Next you will read to us from Christian books and then you will want us to become Christians, just like you.” I said,” I am not asking you to read from any Christian book. I did not receive the Lord Jesus by reading Christian books but by read­ing our own holy Bible. I then prayed to the almighty God and asked Him to help me, which He did, and by His mercy He saved me. Now I am free from the fears which still grip you, and my children are also saved. You, too, can be free and happy in the Lord if you will only put your trust in Him.” They replied, “Yes, we could become as you are, but we would have to pay a very great price.” I said, “That is true, and rny family and I also had to pay. We lost many friends, but you must realize that friends and family cannot give you salvation from your sins. And when you find yourself in deep trouble, then you will not find even one friend who is ready to help, but the Lord loves us with an everlasting love, as it is written in John 3:16, ‘For God so loved the world, that he gave his only begotten Son, that whosoever believeth in him should not perish, but have everlasting life.’ ”

Please pray with me that more and more of my brothers according to the flesh will forsake the traditions of their lathers and seek the truth which is found in God’s Word. Then they, too, will know freedom from sin and fear, and they will have the victorious joy which comes from trusting in Jesus as their Savior and Lord.

Joel is a faithful witness for his God in the land of Israel. A survivor of the Holocaust, he found Jesus Christ as his Savior following Israel’s 1948 War of Independence. He served in the Israeli army with distinction through all of her modern conflicts. Of far greater importance, he serves in the Lord’s army. 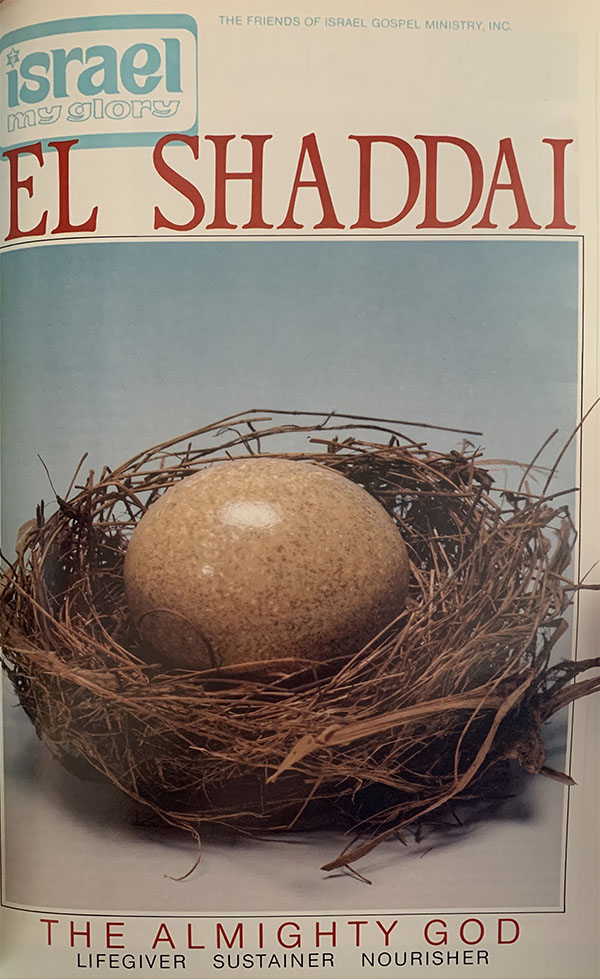