During my visit to North America in the spring, I met a very orthodox Jewish man. We spoke for only a few minutes, but in that short time we became friends. I even gave him my address in Israel and was sure there would be further contact despite the many miles. This “bread,’ which I cast upon the water, I would find one day.

When I returned home one day from work I saw a man, whom I had never met before, sitting at our dining room table, I saw that he was feeling good — eating and speaking with my children until I came home. He intro­duced himself as a good friend of the man whom I met so far from home. The man in my home was also ultra-orthodox from Jerusa­lem. He began by saying that I had promised to give my friend something, and he had sent him to collect it He was interested in know­ing what it was.

“I want to give my friend, and you as well, something which neither of you has,” I said. “I received from the Lord the biggest gift, and this is JOY! This you can have, and all your friends.” Of course, he was surprised to hear this. He said, “Are you normal?” “Yes,’ I replied, “I am normal, and I know what I am saying. When I met your friend he was like you, unhappy. What is the biggest gift you can give to such a person? —JOY. Of course, this is not in my power to give, but I know how I received joy when I was unhappy. And now you see me and my family — we are happy.”

He was curious to know how I had found joy, so I proceeded to explain, “Just like someone who has walked in darkness and finally sees the light, he thanks the Lord for the light. So it is with you, who are unhappy. You cannot say you don’t want to rejoice.” My new friend was waiting, not interested in food anymore, but fearfully waiting the words of the Lord. I started to explain how I came to know the Lord and how I first received joy and happiness — how I was smiling without real­izing it.

“You know, l am so afraid,” the man replied. “Of me?” I asked. “No,” he assured me. “To be afraid is good,”’ I replied. “Why is that good?” he questioned. I explained, “It is but for fear that men would have swallowed up each other. It is written in Psalm 112:1, ‘Praise ye the Lord. Blessed is the man who feareth the Lord, who delighteth greatly in his com­mandments.’ Believe me, I also fear the Lord. But with all this, I am happy because I am sure that what the Lord has given me, He will not take away from me.” “And what is this?” he asked. “Salvation,” I replied, “forgiveness of sin and everlasting life.”

My new friend was surprised to see me without a hat. This was hard for him to under­stand. “You say that what I am telling you is very interesting, but why can’t we be good believers and serve the Lord without a hat?” I questioned. Then I quoted Ezekiel 18:31: “Cast away from you all your transgressions, by which ye have transgressed, and make yourselves a new heart and a new spirit; for why will ye die, O house of Israel?” “And now think about that. What is more important, a new hat or a new heart, a new spirit? In many Israeli restaurants, even religious ones, we can see Arabs working. If it is a religious restaurant, they must cover their heads. Does this make them Jewish? Or good children of God? For so long you have worried about your hat and not your heart. You have been falsely guided, and this can bring you to a very dangerous downfall.

“We, who live in the land of promise, should be good examples to the rest of the world, but where are we going? Our nation is sinking and looking toward others. As it is written in 1 Kings 12:11, ‘And, now, whereas my father did burden you with a heavy yoke, I will add to your yoke; my father hath chas­tised you with whips, but I will chastise you with scorpions.’

“Now you have the choice,”  I told him. “Receive the Lord as your personal Savior and come out from the darkness and false teach­ing.”

“I have been here a long time. What is it that you want to give me?” he asked. “I will give what the Lord has given to me,”’ I replied. I read some Scripture where it is written, “… happy is that people, whose God is the Lord” (Ps. 144:15). “Now is the time to receive the Lord. ‘Arise, shine; for thy light is come, and the glory of the Lord is risen upon thee’ [Isa. 60:1]. The Lord has brought us salvation on a silver tray. And this He has done because He loves us. We are sinners, but because of His suffering we can be saved.” “What! Can God suffer?” he asked.

Up to this point I hesitated using Isaiah 53, but now I read it to him. As I read it, his face changed because he knew it was referring to Jesus Christ. Then I quoted Zechariah 12:10: “And I will pour upon the house of David, and upon the inhabitants of Jerusalem, the Spirit of grace and of supplications; and they shall look upon me whom they have pierced, and they shall mourn for him, as one mourneth for his only son, and shall be in bitterness for him, as one that is in bitterness for his firstborn.”

At this time he asked me why and how I received the Lord. I explained that I received Him because it is written in the Bible. “Is this the truth?” he asked. “Yes,” I replied, “so think about it.” He assured me he would. “This is what I want to give you, if you will receive it.” Then he said, “I think so.”

Please join us in praying for the salvation of this ultra-orthodox man. He has been ex­posed to the truth of the gospel. May the Lord open his eyes and convict his heart. 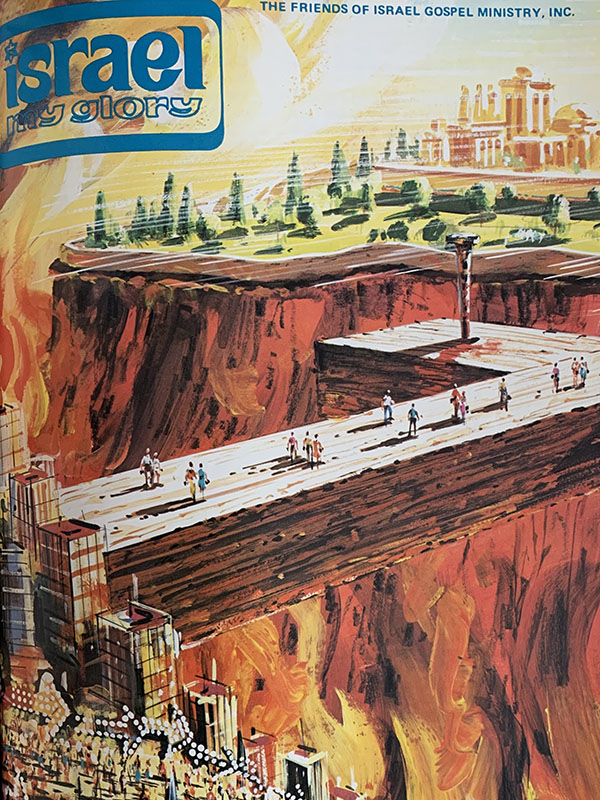