I  was privileged and blessed to have two believing parents in the Lord Jesus. The most important heritage they gave us was a biblical and spiritual education and guidance from the time we were children.

Dad was a Holocaust survivor from Poland, and Mom immigrated to Israel by herself from Persia (now Iran) in 1949 when she was 13 years old. Both went through the most difficult times in the birth of the modern State of Israel.

Since Dad was an orphan, he volunteered for the most dangerous operations during his military service, especially during the War of Independence in 1948. He knew his death would not cause any tears because he would not be leaving anyone behind. Such heroism was the mark of his life.

My father was an honest man and always spoke the truth.

Mom and Dad never spent a penny on themselves. Their sole intent was that their children have a better start in life than they had. Their love for us and for their grandchildren was unconditional.

In my entire life, I do not remember Dad ever missing a church meeting unless he was outside the country, in army reserve duty, or gravely ill.

Even during the last two years, with all of his sicknesses and dementia, he demanded that I drive him to church on Saturday and to prayer meeting on Wednesday evening.

Dad was among the people who prayed for years that God would give us a church building. He was extremely happy to see his prayers answered and the church packed with people. He also thanked God that some of his children went into full-time ministry.

From being an orphan whom no one cared about, he became a father to three boys and a girl and a grandfather to 16 grandchildren.

More than 10 years ago, I visited the Auschwitz concentration camp in Poland with Dad. The two of us stood silently in the crematorium, thinking, Hitler lost. We are here! It was a deeply meaningful experience.

On November 14, 2014, Dad fell at home and broke his hip. That same day he had hip-replacement surgery. But his body was too weak to recover. Three days later, at age 86, he died.

He was buried that evening. At the funeral, some of the older grandchildren shared their experiences with their grandfather and spoke of his faith in Jesus. My brothers and I read from the Scriptures and sang at the graveside. We are so happy his funeral glorified our Lord.

Our parents were married 56 years. We all miss Dad a lot. Please pray for Mom’s encouragement.

Dad’s verse was Psalm 27:10: “When my father and my mother forsake me, then the Lᴏʀᴅ  will take care of me.”

We are sad Dad is not with us but, at the same time, so happy and thankful God is true to His promises to save His children and bring them into His presence.

We rejoice because we know we will meet again. 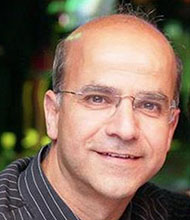 Meno Kalisher is an author and speaker for The Friends of Israel.

When I was reading the book of Obadiah awhile back, I felt it offered so many good principles for everyday living that I thought you might enjoy an entire issue on it. Many months later, as I was preparing...

History is replete with small nations that strut across the world stage, proudly ﬂex their political muscles, and then vanish into obscurity. Edom was such a nation, and its story was...

Obadiah 1–4: When the apostle Paul wrote to his young protégé Timothy to tell him how to pastor the church at Ephesus, he cautioned him not to give too much responsibility to...

The Folly of Misplaced Trust Obadiah 5—9

Obadiah 5—9: Most Americans remember where they were on 9/11. We remember our vulnerability; our politicians singing together on the Capitol steps in Washington, DC; the national prayer...

Obadiah 10—14: Imagine having to sleep with a gun under your bed. I am not talking about Detroit, New York, or Philadelphia. I am talking about Haifa, Tel Aviv, and Jerusalem. This...

Obadiah 15–16: Have you ever seen someone revel in another’s misfortune or be smug and self-satisﬁed when sympathy was called for? There’s a saying, “What goes around comes around.” The Bible...