Dr. Ben Abraham, The Friends of Israel’s Eastern European worker, was born in Romania. Memories of his early years are filled with images of persecution and suffering for believers in the Messiah. Last spring, after an absence of ten years, he returned to his native land. Dr. Ben related his impressions to Israel My Glory in the following interview.

IMG: Dr. Ben, tell us about your earliest memories of life in Romania.

Dr. B.: First, let me say I feel blessed to have been born in a Communist country. Maybe some will ask why I feel this way. In my view, it was a privilege for my earliest memories to be of the suffering church. One might say I was born in the church, since my grandfather was the founder of the Brethren Church in Romania. My father, who is Jewish, received the Lord in Romania, before I was born. So my recollections center in the church.

IMG: Can you cite one vivid incident that will reflect the situation you experienced as a child?

Dr. B.: I could tell you of so many things that happened.

On one occasion, we were with several families of believers who were celebrating an anniversary. The adults were having a time of prayer when the police suddenly burst in and arrested all of the men.

I remember the day when they knocked on the door and took my father and my uncles off to jail. I also remember when they came for my grandfather. He was, to all of us, the grandfather we loved most. At 61 years of age, he was a man of character and honesty—a man who always knew how to love people. I was 11 years old when they put him in prison. It was part of the suffering that the church had to go through. They were arrested just for the sake of Christ.

In those days, they not only took up the cross, but, because of their faith, these believers were put on the cross by those who hated the gospel.

IMG: When you were going through these things as a child, were you drawn closer to the Lord?

Dr. B.: At 11 years old, when they brainwash you, you start believing that Communism is good. But when they took my grandfather, for the first time I understood just how bad Communism really was.

It was then that I began to grow in the Lord. I came to know that walking with God was not intended to be an easy or prosperous experience, from the physical point of view. If you truly follow Jesus, you can expect to be persecuted. You will have suffering as well. That is the way He told us life on this earth would be.

IMG: When did you leave Romania?

Dr. B.: Yes, to get married. But I could not do so because of the regime’s red tape. It took me 16 months to obtain permission from the state to be married.

IMG: You also became a medical doctor during this time?

Dr. B.: That is correct. I graduated in Bucharest. I was in the second year of medical school when I got married, so I decided to finish my medical education before we left the country.

IMG: Was life for believers better in the 70s?

Dr. B.: Unfortunately, no. During my fifth year of medical school, my wife Lenore was arrested.

One morning I received a phone call from a friend who was considered a dissident (anyone who disagreed with Communism was branded a dissident). He was a great believer, and we were planning to be in his home that evening. He warned me not to come, because secret police were watching his house.

I didn’t have time before I left the hospital to tell Lenore about the call. When I returned home late that evening, she was not there. I had no idea where she was. I later learned that she had gone to see our friends, as we had planned. She saw the police with their dogs, others on horses, and some police cars parked along the street, but it didn’t occur to her that this had anything to do with our friends. Secret police answered her knock. She was taken to the police station, where she was interrogated for four or five hours. They released her but continually came to our house to pick her up for more questioning—the same questions in a hundred new forms. It was a very trying time for us.

IMG: You and Lenore left Romania following the completion of your internship and came to the U. S., ultimately becoming a member of The Friends of Israel staff. Recently you had the opportunity to return to Romania. How have things changed since the fall of Ceausescu?

Dr. B.: I remember the past when you always felt that someone was following and watching you. It was as though you had a shadow always with you. When you gave someone a piece of Christian literature, you wondered if he was from the secret police. On my return, I found that fear is gone, at least for the time being.

I arrived at the Romanian border with my suitcases filled with Bibles. Thoughts of the old days came back to me as I faced the border officials—undoubtedly the same men who worked for Ceausescu a few months before. With the same cruel looks they displayed when they worked for the dictator, they demanded that I open my luggage.

I smiled at the official and asked, “Is Romania really a free country now?” This caused him to smile back at me. “Yes,” he said, “Romania is a free country.”

Thoughts came back to my mind of the time when my brother returned to Romania in 1975, after some time out of the country, and found himself in a great deal of trouble because he had one Bible in his suitcase. He was held and interrogated for five hours. My luggage was filled with Bibles and Christian literature.

“Then if Romania is now a free country, I will tell you before I open my suitcases that they are full of Bibles and Christian literature.”

“Open them,” he insisted.

He took a look at the hundreds of Bibles weighing down my luggage and waved me through. I could only praise God for this miraculous change.

IMG: How long were you in the country?

Dr. B.: On that trip, 12 days. I thought I had brought sufficient literature—four or five hundred Bibles and pieces of literature—but my supply was completely gone after only a few hours.

IMG: There was a large meeting in Bucharest while you were in the country. Please tell us about it.

Dr. B.: It was scheduled for the first Sunday afternoon I was in the country. To my surprise, this meeting was to be held in the Hall Palace, a building used exclusively for Communist party functions until this time. But on that Sunday afternoon they were to have an evangelistic meeting there! The meeting was to begin at 4:00 p.m. By 3:00 p.m. the hall, which seats 5,000 people, was filled to capacity, with another 1,000 seated on the stairs and in the aisles. When the doors were closed, 3,000 more people stood outside. It gave us a magnificent opportunity to preach on the streets to the overflow crowd. We talked to people in the streets and sang songs of the faith. For me, remembering the past, it seemed as though I was dreaming. Only three months before, you would have been afraid to say one word about Jesus in the streets. But here we were, preaching and singing—it was unbelievable.

IMG: What is your assessment of the future of Romania?

Dr. B.: I believe God has blessed Romania by opening the door to the kind of freedom we have been talking about. But there is another reason for God’s blessing in that country. Romania has opened its doors to the Jews who are leaving the Soviet Union. Budapest was also open, but because of threats from the Arabs they closed their doors. Romania continued to be a transit center for Jewish people going to Israel. God has honored this, I believe, and the entire country is having the benefit of hearing the gospel. We have a wonderful opportunity to share the love of the Messiah with the Jewish people passing through Bucharest. Even though they are there for just a few days, we can put a piece of literature in their hands and, in other ways, share His love for the Jewish people who pass through Bucharest each month.

IMG: What, in your view, needs to be done while the door of opportunity is open in Romania?

Dr. B.: There are at least three very important areas we must consider. First, Romanians need to be trained in evangelizing and establishing people in the faith. This is most important. Next, there are about 30,000 Jewish people in the country who need to hear the message of the Messiah. Finally, some 4,000 Russian Jews pass through Bucharest each month on their way to Israel. We need trained people on the scene who can share and demonstrate the Lord’s love to them. 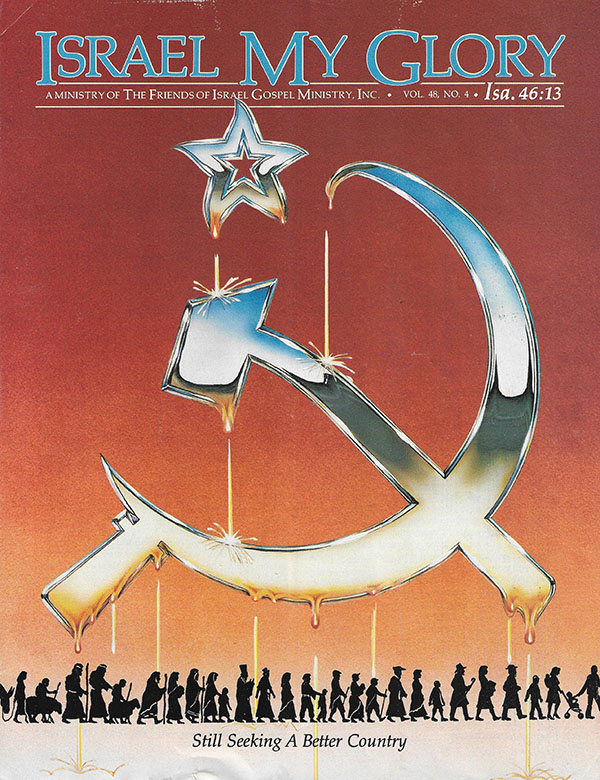 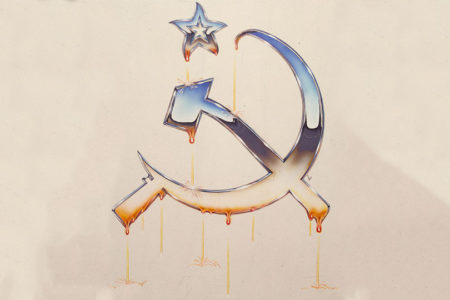 There’s something compelling about seeing those big wrecking balls swinging from cranes, bashing the walls of obsolete buildings into of rubbish. Even more fascinating is the countdown for the triggering of explosives set against supporting...

Dr. Ben Abraham, The Friends of Israel’s Eastern European worker, was born in Romania. Memories of his early years are filled with images of persecution and suffering for believers in the Messiah. 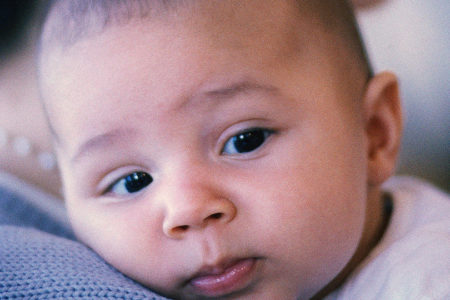 Abortion and the Origin of the Human Soul

The Bible contains two facts that bear significantly upon the issue of when the fetus is a complete human being possessing a human soul. The first fact is that man is created in the image... 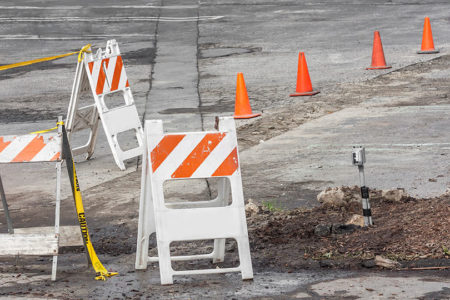 The 1990s will be a decade of unprecedented changes worldwide. Eastern Europe is swiftly evolving into a Western-style society. Western Europe will be sporting a new look known as the European Economic Community by 1992.

The Shema: How Much of Me Does God Own?

As you know, we are experiencing a large immigration of people to Israel from Eastern European countries, especially from Russia. Because Israel is a small country, every area is receiving its share of these immigrants...