In his latest article on Israel and the Palestinians, TIME magazine’s Karl Vick prejudges matters almost from the outset in his reference to “Israel’s 43 years of occupation of Palestinian territory.” Of course, no one—not even Palestinians—spoke of “Palestinian territory” in 1967, when Israel captured these areas (the West Bank and Gaza) from their unlawful occupiers, Jordan and Egypt respectively.

These territories were legally earmarked for Jewish statehood as long ago as the 1920 San Remo conference. Israel is not “occupying” the sovereign territory of another state, let alone as the result of aggression. Rather, it acquired the areas in a war of self-defense from unlawful occupiers and aggressors.

Arabs refused to conclude a settlement on the basis of these territories becoming Arab in 1937, when the Peel Royal Commission recommended it; in 1947, when the UN General Assembly endorsed a partition plan; and in 2000, when U.S. President Bill Clinton put forward his peace plan. Israel’s present offer of peace negotiations without preconditions—an offer Mahmoud Abbas’s Palestinian Authority (PA) spurned—does not alter the fact that today, 98 percent of Palestinians live under PA, not Israeli, rule.

Mr. Vick makes lots of claims: that “young Palestinians…know Israelis only as soldiers and settlers, the newly installed Wall having barred exposure to any other kind”; that Israel’s security fence, which he calls “the Wall” (only a small portion is actually a wall) “has created a separation of the mind” between Israelis and Palestinians; that “the uprising that began in 2000…ended after an iron curtain was drawn across the occupied territories.”

The problem is that Vick uses these claims to buttress a false argument that this state of affairs is due to Israel. It is, in fact, due to precisely the things Mr. Vick won’t discuss—Palestinian nonacceptance of Israel and the incitement and terrorism that flow from it.

Vick says nothing of the sermons in PA mosques, the speeches of PA leaders, the incitement in Palestinian textbooks, and the honoring of terrorists living and dead—all of which dehumanize Jews, delegitimize Israel, and rationalize terrorism and “martyrdom.”

On the very day in September 2010 that talks between the sides commenced (briefly) in Washington, DC, the PA ambassador to Iran said Palestinians will continue their war on Israel until “the complete eradication of the fabricated regime in due course.” A PA minister presented awards to the families of dead terrorists and accused Israel of harvesting the body parts of deliberately murdered Palestinians. Abbas’s Fatah party, which controls the PA, named its fifth party convention in honor of Munich Olympics terror mastermind, Amin Al-Hindi.

But Mr. Vick never found space in this or any other recent articles to mention these facts that would have disturbed his preoccupation with what he considers Israeli culpability.

If Palestinians accepted Israel, if their media and schools were free of blood-curdling indoctrination and jihadist incitement, if Palestinians did not laud and support terrorists that murder Jews, there would be no Israeli soldiers in PA-controlled areas, no check-points, no roadblocks, no security fence, and no “separation of mind” that Mr. Vick so decries.

Palestinians may indeed be separated psychologically from their Israeli neighbors, whom they only know as soldiers. If this situation is to change, however, Palestinian terrorism, as well as the nonacceptance of Israel and the incitement that feeds it, will have to end—not the Israeli security measures they prompted.

By ignoring the causes and decrying the effects, Mr. Vick follows in the long, undistinguished line of shoddy, superficial, jaundiced, anti-Israel journalists. 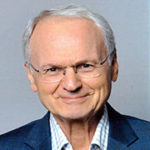 Morton A. Klein is a German-born American economist, statistician, and pro-Israeli activist. He is the president of the Zionist Organization of America (ZOA).

A new crusade to rid the Middle East of Jewish people is picking up support around the world. Will it succeed? Read this.

All was quiet except for the windshield wipers swishing vainly back and forth as heavy snow reduced visibility to zero. It was a good time to pray—for many reasons

Imagine crying out to God but receiving no response. He’s always there, of course, but sometimes it doesn’t seem that way. Here’s what to do when God seems silent.

For Roses and for Thorns

How often do you go to the throne of grace on behalf of others? This excellent article explains why doing so may be one of your most important ministries.