…take the HELMET OF SALVATION

Handley Moule was a godly scholar-preacher who ministered in Great Britain around the turn of the century. One day, as he was walking along Princess Street in Edinburgh, he approached a corner where Salvation Army workers were conducting an open-air meeting. He paused for a moment to listen, and one of the young women from the group spoke to him saying, “Sir, are you saved?” The venerable Moule looked at her with a kindly smile and twinkling eyes and said, “Do you mean ‘esosmai’, ‘sodzomai’, or ‘sothesomai’?” – three Greek words that were utterly incomprehensible to her. She showed her puzzlement by her dazed look, so the learned doctor continued in English. “Do you mean ‘Have I been saved’, ‘Am I being saved’, or ‘Shall I be saved’?” True salvation is in all three of these tenses. In the past, the believer has been saved from the penalty of sin; in the present, he is being saved from the power of sin; and in the future, he will be saved from the very presence of sin. If any one of the three were left out, there would be no reality of salvation.

When Paul commands the Christian soldier to put on his helmet (Eph. 6:17a), he uses one of the richest words in all of the Bible to describe that piece of armor – the helmet of salvation. The figure of a helmet immediately suggests that this is something designed to protect the head, seat of the mind and intellect. This helmet can keep our thinking straight and preserve us from mental confusion and darkness.

As a Christian looks around at the world, he finds despair, confusion and disillusionment all around him. Just think about the staggering complexity of the issues of the day – broken relationships, crimes and delinquency, moral decay and the misery of our vast city slums. The mind is simply overwhelmed by the insolubility of the problems which face human lives.

The great minds and thinkers of our day are often in despair as well. The freethinking playwright, George Bernard Shaw, following the Second World War, said, “The science on which I pinned my fate is bankrupt. It’s counsels, which should have established the millennium, led instead to the suicide of Europe. I believed them once. In their name I helped to destroy the faith of millions of worshipers in the temples of a thousand creeds. And now, they look at me and witness the great tragedy of an atheist who has lost his faith.” What a revealing case of mental darkness by one of the great writers of our day.

But the Christian has the helmet of salvation. But one might say, “What is this helmet – this protection which keeps our thinking straight in the midst of a very confusing world?” Paul answers in one word – it is the helmet of salvation. Paul is not speaking of the salvation decision made in the past which we call regeneration. Neither is he talking about salvation as a present experience which we call sanctification. Paul is looking on into the future and is talking about a salvation which will be a future event. This is confirmed by two references. The first is Romans 13:11: “And that, knowing the time, that now it is high time to awake out of sleep; for now is our salvation nearer than when we believed.” The second reference defines this helmet further. “But let us, who are of the day, be sober, putting on the breastplate of faith and love, and, for an helmet, the hope of salvation” (1 Th. 5:8). This is what we refer to as glorification – that aspect of salvation which is yet future. This future tense of salvation is stated very plainly and fully in Romans 8:22-25: “For we know that the whole creation groaneth and travaileth in pain together until now. And not only they, but ourselves also, who have the first fruits of the Spirit, even we ourselves groan within ourselves, waiting for the adoption, that is, the redemption of our body. For we are saved by hope. But hope that is seen is not hope; for what a man seeth, why doth he yet hope for? But if we hope for that which we see not, then do we with patience wait for it.”

This hope of salvation is an anchor for our minds in a swirling sea of confusion. All human schemes to reach world peace and harmony are doomed to fail, but Jesus Christ is working out His own plan which will culminate in His appearing again and in the establishment of His own reign and righteousness on the earth. That is the helmet of salvation which will keep our thinking straight in the hour of man’s utter confusion and darkness.

Why is it that thoughtful minds like George Bernard Shaw are so bewildered by what they find in life? It is because they pinned their hopes on unholy, unrealistic resources. But the Christian has a helmet of salvation; he has a hope for the future. He has an understanding that God is working out His purpose and, therefore, he is not disturbed when human programs go wrong and everything fails – when the New Deals and Fair Deals and the Great Societies all come crashing down, the kingdom of God cannot be shaken. All this is possible only if we put on, as a helmet, the hope of salvation. The hope of the coming of the Lord is a blessed hope (Ti. 2:13), a purifying hope (1 Jn. 3:3), and a comforting hope (1 Th. 4:18). It gives us a purpose for living in the darkness of this age.

Are you frightened by world prospects? Well, let me tell you, “You ain’t seen nothin’ yet!” It is going to get worse. Jesus said men’s hearts shall fail them for fear because of things that are coming to pass on the earth (Lk. 21:26). Paul said that in the last days “evil men and seducers shall become worse and worse, deceiving, and being deceived” (2 Tim. 3:13). If you think it is hard to stand now, what will it be when the darkness increases, the cause looks hopeless, and things get worse? That is the hour when you must have the hope of salvation – the helmet to protect the mind. This will keep your thinking straight and keep you from succumbing to the delusion of the world. In the strength of the hope of salvation, you can keep your heart and mind undisturbed in the midst of battle. This is our helmet – the hope of salvation. It covers our past, comforts our present and confirms our future. 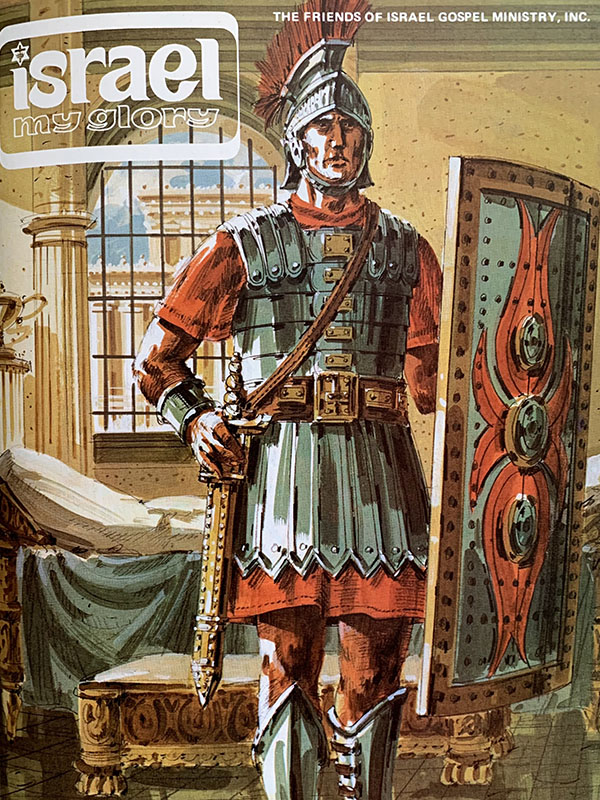