Most people in the world don’t know much about Hanukkah—they should. All most of us see in it are those quaint eight-branched candelabra which adorn the outside of synagogues or are seen in public displays depicting seasonal Jewish themes. Little is understood as to why Jews light little candles and remember ancient stories at about the same time as Christians are joyfully exchanging Christmas greetings. Hanukkah is much, much more than small lights and dim legends. In a world that desperately needs good news, it rises to say that good guys do sometimes win the big ones and that there is a larger hand of help available to beleaguered human beings.

Eat the Pig or Die

In 167 B.C. there was trouble on the Temple Mount in Jerusalem. Jews had lost domain on the mount to one Antiochus IV, who had become a regional ruler in the aftermath of Alexander the Great’s resounding victories and untimely death. As was sometimes true with ancient monarchs, Antiochus was possessed with delusions of deity and therefore appropriated the title Epiphanes, The Manifest God.

It was Antiochus who put out the menorah lights in the Holy Place of the sanctuary and profaned the altar of Jehovah by sacrificing a pig upon it, erecting an image of a Greek god, and dedicating the Jewish Temple to Olympian Zeus.

He crowned his outrageous desecration by burning scrolls containing the Word of God and outlawing observance of the Law of Moses. Thus, Antiochus aspired to stamp out the worship of Jehovah, eradicate Judaism, and force Jewry to embrace a pagan religion.

Subjecting Jewish people, however, was quite another matter. The Seleucid tyrant attempted to accomplish his goal by having his emissaries take a mini-altar and sacrificial pigs through their villages and forcing the populace to participate in pagan acts of worship. Proof of conversion would be demonstrated as villagers stepped forward to eat the flesh of the animals. The alternative to eating pig was death. It was an ill-fated program for the invaders—one which proved to be the beginning of the end for the pagans.

At a village northwest of Jerusalem called Modin, Antiochus representatives found more than they were prepared to cope with when a Temple priest named Mattathias refused to participate in the sacrilege. He had been singled out to be the first to thrust the sacrificial knife into the tainted animal and taste the forbidden flesh. The fury of the old priest was unleashed on Appelles, the agent of Antiochus. Mattathias was immediately joined by his five sons and a host of villagers who struck down the Seleucid soldiers. His son Judah, known as Maccabee (the hammer), consequently led a national rebellion which would, in the end, rid the land of the Syrian scourge. The triumph of the Maccabeans against superior forces and all odds bears all the earmarks of divine intervention through selected human instruments. Jehovah protected and enabled His Chosen People. Courageous sons of Abraham proved that the Manifest God was only a mortal after all. Three years to the day (December 25) after the Temple was defiled, the lights went on again in the Holy Place on Mount Moriah, and Jewish people began a season of commemorative celebration which is observed to this day (Hanukkah). Israel’s tormentor went to his grave unmourned—Jews and Judaism were alive and well.

The story of Hanukkah, for all its fire and force, would be like innumerable thrillers which enthrall then quickly melt into a memory if it were not for its linkage with other events that preserve and enhance it inestimably.

It’s a great story, isn’t it? Underdogs coming through—sinister despots slinking from the stage—legends, which would survive for millennia, being born. But the story of Hanukkah, for all its fire and force, would be like innumerable thrillers which enthrall then quickly melt into a memory if it were not for its linkage with other events that preserve and enhance it inestimably.

Another Hill, a Greater Light

An eminent Jewish historian, Moshe Pearlman, caught the essence of what the Maccabean victory actually meant to Jewry and the rest of humanity as well. He passed it along to us. One might expect a Christian to say such things, but to see it come through a Jewish mind and pen is quite remarkable. In summing up the importance of what the Maccabeans had accomplished in saving Judaism from extinction, Pearlman exclaimed, “The reflection is inescapable that had this happened [defeat of Jewish forces], Antiochus might well have succeeded in stifling the Jewish religion in Judea, and there would have been no dramatic crucifixion of a Jew in Jerusalem two hundred years later” (Moshe Pearlman, The Maccabees, p. 75).

So Hanukkah lights and Bethlehem’s star fuse with the divine sunburst leaping through a rustic stable door at Jesus’ birth. The beam then sweeps away to illuminate a skull-shaped hill and provide a greater light for the people of centuries not yet born. A lone Jew would indeed die on a wooden cross just beyond the Temple courts where the menorah lights were rekindled by pious Jewish priests. Thus it was that the “Lamb of God” became the “light of the world,” and the light emanating from His cross would shine brighter and farther than flickering Hanukkah lamps were ever destined to show their flame. Today His light shines brighter still.

Jesus explained all this when He made His journey up to Jerusalem to attend the annual Hanukkah celebration. If one accepts the traditional date for Christ’s birth (December 25), this would have been a dual observance: the Lord’s birthday and the rededication of the Temple.

The biblical record shapes the details. “And it was at Jerusalem the feast of the dedication, and it was winter. And Jesus walked in the temple in Solomon’s porch” (Jn. 10:22–23). In the same area where He had provoked discussions with the rabbis as a 12-year-old boy, Jesus was answering questions of another kind.

“Then came the Jews round about him, and said unto him, How long dost thou make us to doubt? If thou be the Christ, tell us plainly” (Jn. 10:24).

He did—in six words which are as simple as they are profound: “I and my Father are one” (Jn. 10:30). At the feast of Tabernacles a few weeks before, He had said, “Verily, verily, I say unto you, Before Abraham was, I am” (Jn. 8:58). The Son of man declared Himself to be the Son of God—the I AM. At Hanukkah He said it again in a slightly different way. No one could misunderstand what Christ was saying, nor did they.

What intrigues me about the entire episode is how Christ wove His declaration of deity into the historical fabric of the occasion being celebrated by His Jewish kinsmen.

“My sheep hear my voice, and I know them, and they follow me. And I give unto them eternal life; and they shall never perish, neither shall any man pluck them out of my hand. My Father, who gave them to me, is greater than all, and no man is able to pluck them out of my Father’s hand” (Jn. 10:27–29).

Antiochus attempted to wrest Israel from the hand of God—he could not. They were safe—clasped securely in the Father’s firm but tender grip.

His theme is more than a curious coincidence. Jewry was, at that moment, remembering how Jehovah had, two centuries before, preserved His sheep from the hand of the enemy. Antiochus attempted to wrest Israel from the hand of God—he could not. They were safe—clasped securely in the Father’s firm but tender grip.

Yes, it is much more than just one more interesting tale. Hanukkah is a persistent reminder of one of God’s magnificent prompters which can become, as in the case of the Law of Moses, “our schoolmaster to bring us unto Christ, that we might be justified by faith” (Gal. 3:24).

The final chapter of the Hanukkah story has not yet been lived out on the stage of human experience. And we feel justified in saying that future events will verify the fact that, in a surpassing sense, the best is yet to come.

Scripture paints in Antiochus a vivid portrait of the coming Antichrist, complete with his notorious “abomination that maketh desolate” (Dan. 11:31). Jesus referred to it in the Olivet Discourse (Mt. 24:15). Revelation 13 fills out the picture by describing just how the Antichrist and his infamous cohort will bring things to pass as he launches the last holocaust in a manic attempt to annihilate the Chosen People of God (see also Rev. 12).

Once again, however, the hand of the Lord will secure the believing remnant and bring the nation into a theocratic era during which the Lord will say, “It is my people; and they shall say, The Lᴏʀᴅ is my God” (Zech. 13:9).

And how shall it all be done? The One who walked on Solomon’s porch amidst the chilling winds of a Jerusalem winter will meet the Antichrist and finish what was started with Antiochus long before. “Whom [Antichrist] the Lord shall consume with the spirit of his mouth, and shall destroy with the brightness of his coming” (2 Th. 2:8b).

Did I say “The Light Shines Brighter Still”? It really does, doesn’t it? 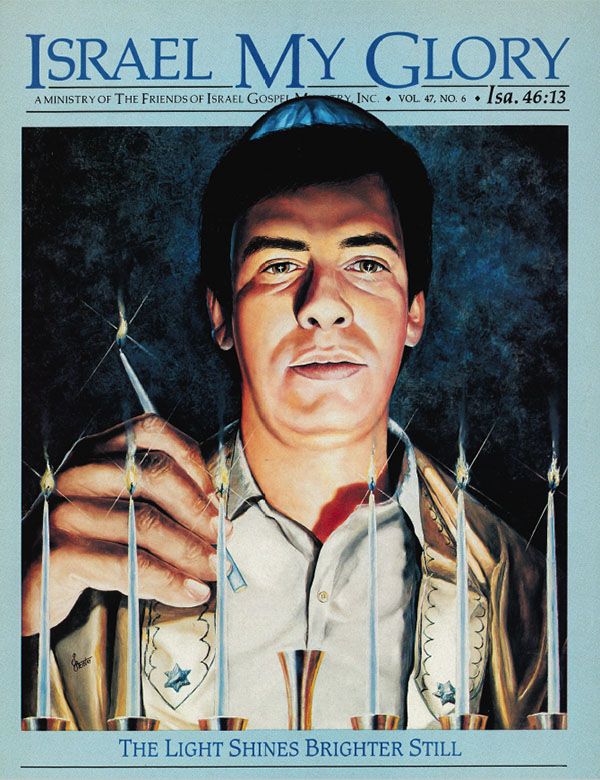